Workers at the New Flyer bus manufacturing facility in Jamestown, N.Y., have formed a union with IUE-CWA. New Flyer agreed to recognize the union after the Federal Mediation and Conciliation Service verified that a majority of the workers signed union representation cards. The unit includes more than 50 workers who make components for New Flyer buses, including electric buses, and are critical to supporting green manufacturing in New York. These workers join more than a thousand workers at two New Flyer facilities in St. Cloud and Crookston, Minn., who are represented by the union. With a union and seat at the table, New Flyer workers in Jamestown are looking to improve relationships with management, create pathways to promotion, and secure better wages and benefits. 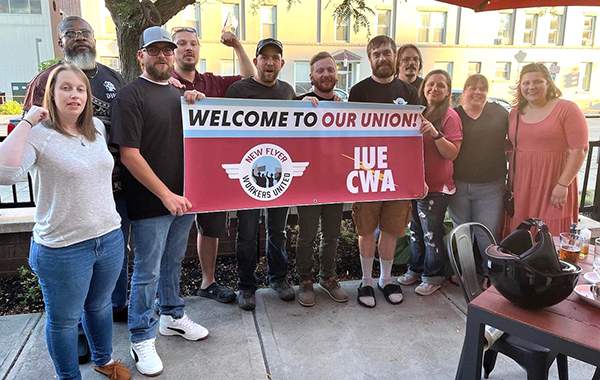 Workers at the New Flyer bus manufacturing facility in Jamestown, N.Y., formed a union with IUE-CWA.

Workers at Activision Blizzard have filed an unfair labor practice charge against the company for continuing to ignore labor law by illegally surveilling workers and shutting down protected speech. Activision Blizzard engaged in illegal surveillance of workers during their walkout in July to end gender inequity; cut off access to a chat channel where workers were discussing wages, hours, and working conditions; and threatened to shut down other internal channels of communication where workers discussed labor issues. This is the third unfair labor practice charge CWA has filed against the company, which is also currently refusing to voluntarily recognize the Albany Game Workers Alliance/CWA union, a group of quality assurance testers at the company’s location in Albany, N.Y.

The National Mediation Board this week certified that a majority of Flight Attendants at Norse Atlantic Airways had signed cards authorizing AFA-CWA as their union representative. The Flight Attendants filed for official recognition and certification of their union earlier this month after demonstrating unanimous support for joining AFA-CWA. In a statement following the certification, AFA-CWA President Sara Nelson said, “We are thrilled for the Flight Attendants at Norse, and they are ready to vote on the historic tentative agreement we reached with Norse management last year. Norse Flight Attendants strengthen our union, our career, and our industry. Our agreement will immediately set a new standard in aviation—both in the terms of the content and how it was reached. Norse Flight Attendants will have the highest starting pay in the industry, strong work rules, and the knowledge that management worked to reach that agreement as a partner, not an opponent.” Read more here.