In conjunction with the strike, workers across the country hosted a virtual town hall to discuss the impacts of Maximus’ policies and practices on its workforce and steps the company must take to ensure justice and fairness for its employees. Labor leaders, elected officials, and community allies, including CWA Secretary-Treasurer Sara Steffens, AFL-CIO President Liz Shuler, Rev. William Barber, Rep. Don McEachin (D-Va.), and Rep. Troy Carter (D-La.), participated in the town hall in support of the workers. Watch the recording of the virtual town hall here.

“Inspired by their co-workers who have stood up to Maximus in the past, more and more workers are joining the fight by taking direct action in protest of unfair working conditions. Have no doubt that your actions today will inspire more of your colleagues across the country to fight for a voice on the job,” said CWA Secretary-Treasurer Sara Steffens.

AFL-CIO President Liz Shuler added, “You deserve a fair share. And you deserve to have your jobs be good union jobs. A multibillion dollar corporation like Maximus has the resources to treat you better. And we're going to make sure that they do. Hold firm. I know you're spread out across communities all across the country but you are not alone. You have each other and you have all of us at the AFL-CIO standing with you.”

Workers were also joined by community activists and supporters at the strike locations and received overwhelming support online from other unions, community organizations, and labor leaders. In addition, supporters from coast to coast across 40 states, seven countries, Washington D.C., and Puerto Rico showed their support by donating to the workers’ solidarity fund that was launched late last month. 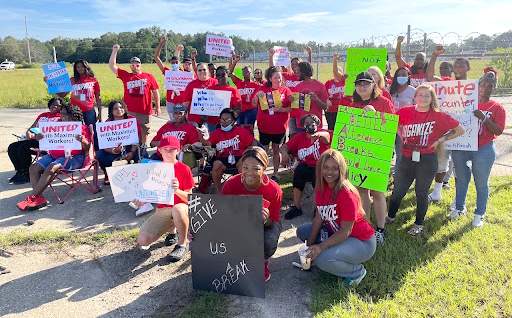