On Friday, over 40 workers from Maximus, the nation’s largest federal call center contractor, marched to the company's brand new, state-of-the-art headquarters in Tysons, Va., to deliver a petition with close to twelve thousand signatures calling for livable wages and affordable health care. The workers, who traveled from call centers in Mississippi, Louisiana, Virginia, and Texas and are organizing with CWA, are also fighting to protect their right to organize a union free from intimidation. Congressman Ro Khanna (D-Calif.) and CWA Secretary-Treasurer Sara Steffens joined the protest in solidarity with the workers. The Maximus workers also participated in the Poor People’s & Low-Wage Workers' Assembly and Moral March on Washington on Saturday. Their collective actions come on the heels of a two-day strike at two of Maximus’ largest call centers located in Louisiana and Mississippi last month. Watch the live stream of the protest here. 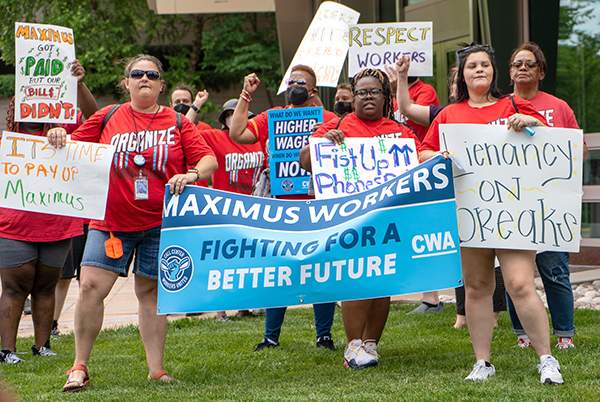 Maximus workers traveled to the Washington, D.C., area to protest outside of the company’ headquarters calling for a living wage and a union.

A new video from More Perfect Union highlights Delta Air Lines Flight Attendants’ ongoing organizing campaign to form a union with AFA-CWA. The Flight Attendants featured in the video courageously share the challenges they face at work, and how the recent resurgence of worker organizing has fueled their continued fight for a voice on the job despite the airline’s extensive anti-union stance.

“We’re not treated like people. We’re not treated like real humans with families, and obligations, and stresses, and illnesses. I am seniority #13,998, and that is how I’m treated at Delta,” said Kara Dupuis, a Delta Air Lines Flight Attendant. Jake Dafoe, another Delta Air Lines Flight Attendant featured in the video added, “I feel we see this American culture shift toward unions right now. It was kind of a bad word at some point in history, but I’ve watched that shift with Amazon, and Starbucks, and other companies. And to listen to their inspiration and their drive to fight against something that they thought they couldn’t, and to achieve what they are achieving, I just—I feel overwhelmed and I know that we’re gonna win here at Delta Air Lines.” 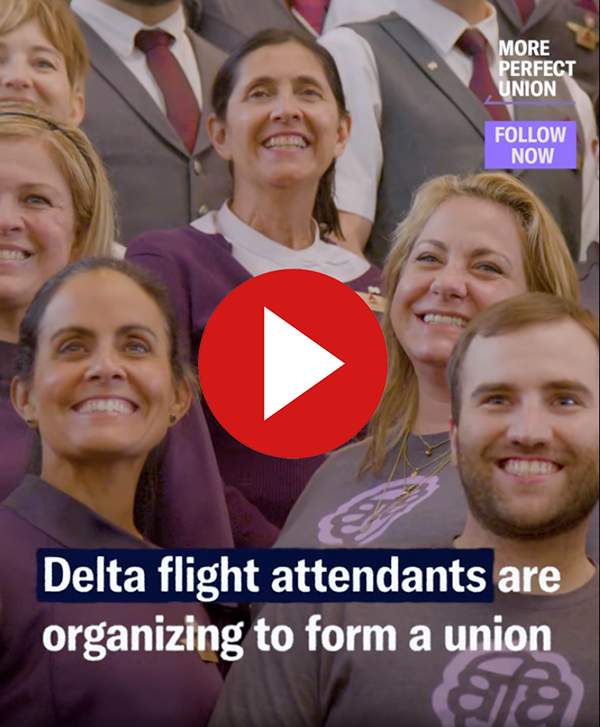