Today, workers from the Verizon Wireless store in Lancaster, Ohio, delivered a 15,000 signature-strong petition to the store's manager that calls for the reinstatement of a former employee, Martin Hopkins. CWAers, including District 4 Vice President Linda Hinton, and community leaders then gathered with Martin for a rally outside the store, where they demanded that Verizon address widespread issues of racial discrimination at the company.

"Racism was everywhere at the Verizon Wireless store where I worked, and the company's indifference allowed it to continue," said Hopkins, a former Verizon Wireless employee who was terminated after enduring years of racist treatment at the retail store in Lancaster. "Verizon Wireless executives tolerate toxic work environments where racial discrimination can thrive. Verizon can and will be a better company if it acknowledges that all workers deserve basic respect on the job."

"I saw management ask Martin to go to the back of the store when openly racist customers would come in," said Ryan Stretton, a former co-worker of Martin's who still works at the store. "I have seen customers and managers use the 'N'-word in front of Martin. Nothing ever happened to them. Martin is the best rep we've ever had. What Verizon did here is wrong. They should bring him back."

Martin was the subject of stories in the Lancaster Eagle Gazette and the Columbus Dispatch in July after he was fired without explanation. The only African American employee in the store, Martin was among the best salespeople in the region and never faced disciplinary action or a customer complaint. At the time of his termination, management refused to supply Martin any reason for his firing, and only later tried to justify it with trumped-up charges. Martin has since filed an EEOC complaint.

"We came to support Martin. The petition and rally are a demonstration of what workers can do when we stand together and refuse to let companies turn a blind eye," said Hinton. "Sadly Martin’s story is not unique. Verizon needs to accept the fact that it is responsible for the culture in its stores. The company should require implicit bias training for all managers and employees."

"Our community has mobilized around Martin to help him find justice and ensure what happened to him doesn't happen to others," said Diane Bailey, President of CWA Local 4310 in Columbus. "Verizon says that it cares for its workers and the communities in which it works, but that hasn't been the case here. Verizon needs to do the right thing by reinstating Martin and making it clear that racism has no place at the company." 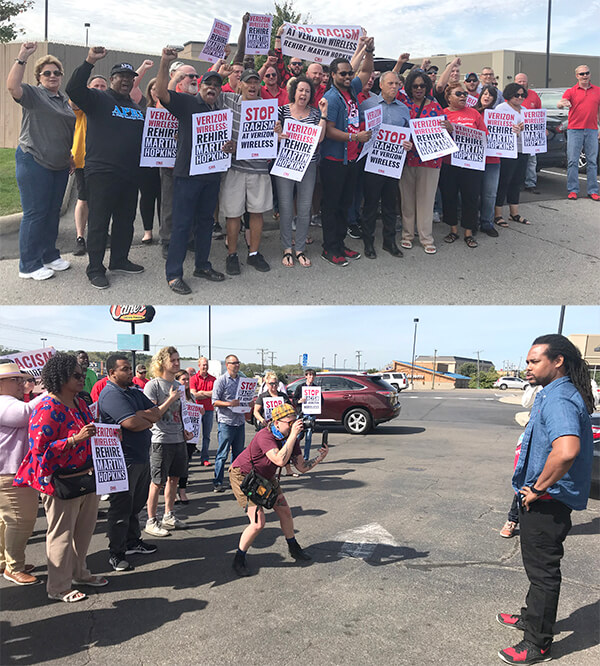 CWAers and community leaders stood with Martin Hopkins, who was fired from a Verizon Wireless store in Lancaster, Ohio, after enduring years of racist behavior.