CWA members prevailed in a pair of National Labor Relations Board (NLRB) decisions this month.

At NBC News, Digital Employees who are members of The NewsGuild of New York, TNG-CWA Local 31003, won raises and back pay after the NLRB found that NBCUniversal acted improperly last year when it rolled back increases it had already granted. The Board ordered the company not only to restore wage increases, but also to award workers back pay.

“The [NLRB] decision is a win for Guild-represented workers who will have their wages restored," said Susan DeCarava, President of TNG-CWA Local 31003. “It is also a strong reminder to NBC management that it must bargain with the union over wages and other terms and conditions.”

In another case, management at the Idaho Statesman attempted to make page views and other digital metrics a mandatory part of employee reviews. The Pacific Northwest Newspaper Guild, TNG-CWA Local 37082, reached a settlement with the McClatchy Company, which owns the newspaper, after the NLRB General Counsel found merit in the union’s charge that the company had violated federal labor law by unilaterally changing the criteria for performance reviews.

The win for the Idaho journalists comes after months of internal protests that McClatchy ignored. In an official announcement, the Idaho NewsGuild said the ruling means that “Idaho Statesman journalists no longer have to fear losing their job for missing an arbitrary quota they had no role in setting. It means they don’t have to cede their news judgement to please Facebook’s and Google’s algorithms.” 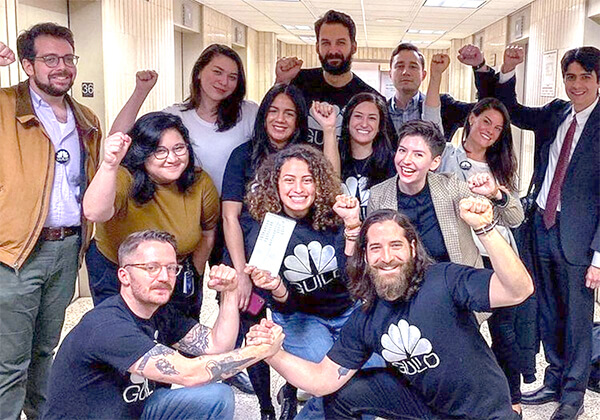 TNG-CWA Members at NBC News celebrate their successful effort to win raises and back pay.