In our 24/7 digital world, broadband connectivity is as essential as roads, water, and electricity to keep the economy, schools, and families up and running. People in every corner of the country suffered as a result of the systemic weakness in national broadband infrastructure during COVID lockdowns, spurring Washington to take the problem seriously. CWA has been advocating for greater broadband access for years, and our recent initiative, the Broadband Brigade, stepped up pressure on the president and lawmakers, with great results. The Brigade’s motto is “Build Broadband Better.”

By early May, the White House announced it had secured pledges from 20 internet service providers to lower the cost of plans for households in the Affordable Connectivity Program (ACP). The ACP is an FCC program that helps connect families struggling to afford internet service. CWA’s Broadband Brigade advocated for the ACP and mobilized to support good union jobs as part of the Bipartisan Infrastructure Law passed in 2021.

The hard work of the Brigade and CWA’s good relationship with the National Telecommunications and Information Administration (NTIA), paid off in a huge way: The infrastructure legislation included a rule that any state that wants to get broadband funding has to connect with a labor union first and provide feedback to the government about their approach to ensure that a skilled and diverse workforce and good-paying jobs are part of its plan.

Before the town hall, I wanted to gain some insight into what’s happening in the broadband world and how young workers can help achieve our goals, so I talked with one of my mentors, Misty Robertson, CWA National LPAT Campaign Lead and an expert on CWA’s Broadband Brigade initiative. Some of our conversation is excerpted below. 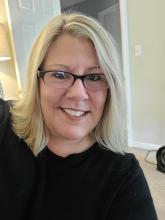 Amanda: The internet really became our national lifeline during the pandemic. What was it like where you live in Tennessee?

It absolutely is a lifeline. But the truth is, many students—including the most vulnerable in terms of poverty and special needs—have almost nowhere to go for reliable, solid broadband. Yet it’s become as essential as paper and pencils. In my community, I’ve seen teens and even little kids trying to get online at Starbucks, libraries, or through special community access points. It’s incredibly frustrating.

Amanda: This doesn’t make sense. Why, in such a wealthy country as ours, are so many people living without solid broadband connections?

Misty: A lot of it comes down to money and discrimination. Some big telecommunications companies engage in digital redlining, or denying service to certain neighborhoods or areas because it isn’t seen as profitable enough. These areas are often poor or have a larger Black or immigrant population. The result is usually that people in redlined areas pay higher fees for service (which they often can’t afford) or travel long distances to another neighborhood to find better service. There are also major problems in rural hospitals and farming communities. Without reliable internet, it’s impossible for hospitals to provide the tele-health services their patients need, and farming also now requires high-speed internet service to keep operations going. This is why CWA has been so strongly in support of federal dollars for infrastructure improvements—it means better service for the people who need it and better union jobs for thousands of workers.

Amanda: What can we in the labor movement, especially young workers, do to help?

Misty: Supporting the Broadband Brigade is a great place to start. The Brigade has now grown to 43 members in every CWA-represented state. We’re training members to lobby elected officials about the issues that matter to us and to tell our stories. Our Brigade members have met with White House task force representatives, been a part of TV media campaigns, and been interviewed by journalists.

If you’re in North Carolina, we’d love to have members join our North Carolina Broadband Town Hall on June 21st. You can sign up here.

We’re really proud of how many people are stepping up and joining the campaign and the incredible progress we’ve made. It’s an example of what happens when we pursue a goal together. I know we can bridge the digital divide!