This week, CWA members, retirees, staff, and leaders were joined by other public sector union members at the New Jersey Statehouse to demand that the Constitutional Amendment to ensure pension payments be put up for a vote and passed in the Senate.

Despite these efforts, New Jersey Senate President Steve Sweeney has not put the Constitutional Amendment up for a final vote on the Senate floor. Sweeney has stated that he will not post the bill for a vote until he has the votes to override a veto by Governor Christie on Transportation Trust Fund (TTF) legislation.

The State Senate can take up the measure on Thursday, August 4 or on Monday, August 8. The deadline under the NJ Constitution for the ballot question to pass through the State Legislature is August 9. If the Constitutional Amendment is not put up for a final vote by Senate President Sweeney on Monday and passed by the majority of the Senate, it will not appear on the ballot for voter approval in November.

This would go back on every commitment made by Senate and Assembly leadership. CWAers are holding every legislator responsible for whether the resolution gets put up for a vote and passed.

"It's been over two decades since any administration – Republican or Democrat – made a full pension payment," said CWA NJ State Director Hetty Rosenstein. "The fact that Senate President Sweeney – at the eleventh hour – will not post it for a vote is the exact reason we're demanding a constitutional amendment. There is no reason the pension should be a casualty of the legislature's inability to secure votes for the Transportation Trust Fund. But every time there is some other political or economic issue, the pension plan is traded for it."

CWAers are keeping up the pressure, and calling their state senators, urging them to put the Constitutional Amendment on the November ballot. 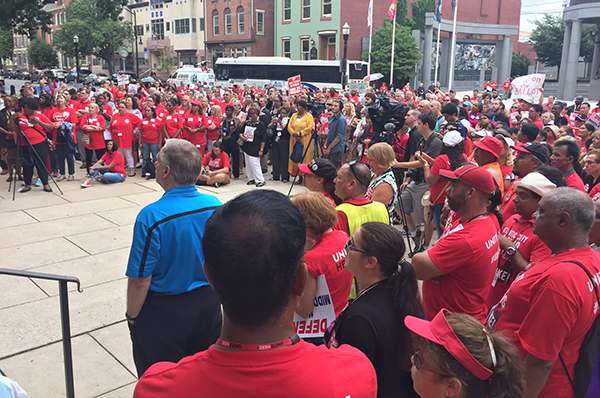 CWA members, retirees, staff, and leaders were joined by other public sector union members at the New Jersey Statehouse to rally to pass a bill to protect NJ pensions.