Last week, NABET-CWA won the largest back pay settlement in the 84-year history of the National Labor Relations Board (NLRB), requiring CNN to pay a total of $76 million to hundreds of broadcast technicians who were fired after CNN terminated its subcontract with union-represented employees at Team Video Services (TVS). The settlement provides substantial justice to workers who have been waiting more than 15 years to be made whole for the losses that they suffered as a result of CNN's unlawful conduct.

NABET-CWA's longstanding labor dispute with CNN threatened to disrupt the CNN-hosted January 14 debate at Drake University, with NABET-CWA advising the Democratic National Committee, the Democratic presidential candidates who qualified for the debate, and CNN of its intention to picket the event.

CWA President Chris Shelton extended his thanks to the Democratic presidential candidates, who demonstrated their commitment to working people by intending to honor the picket line.

"After more than 15 years, this settlement agreement finally delivers justice for workers who experienced serious hardship in their lives due to CNN's union-busting practices," said NABET-CWA President Charlie Braico. "This incredible settlement in workers' favor should send a very clear message to CNN and to other employers that union-busting is illegal and has consequences."

CNN's ability to avoid taking responsibility for its unlawful behavior for over 15 years shows just how far U.S. labor laws that are supposed to protect workers have become rigged in favor of corporations. While CNN did everything possible to avoid complying with the law, many of the affected workers struggled to make ends meet with minimum wage jobs or were forced to uproot their families in order to find work. Several of the workers have died while waiting for justice from the company. 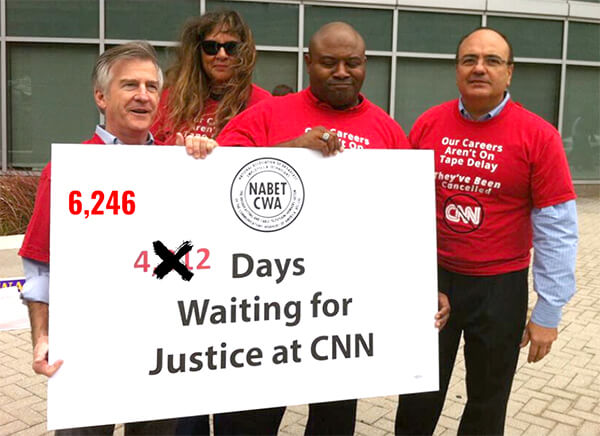