The Presidents of NABET-CWA and the NewsGuild-CWA released a joint statement and video condemning the arrests of CNN reporter Omar Jimenez, producer Bill Kirkos, and photojournalist Leonel Mendez while they were covering protests over the death of George Floyd in Minneapolis.

"Arresting a CNN correspondent and crew while they were doing their jobs to inform the American public about the protests in Minneapolis is completely unacceptable," said NABET-CWA President Charlie Braico. "The crew did everything properly, including identifying themselves, presenting proper press credentials, and asking for guidance from law enforcement. We must demand answers for why this happened and make sure it doesn't happen again."

"The arrest of CNN reporter Omar Jimenez and his crew is an absolute outrage," said NewsGuild-CWA President Jon Schleuss. "As journalists, we support the free speech rights of everyone. This morning's events sent a chilling, public reminder that in America today, journalists are being targeted for doing their jobs. Without a free press, there are no free people."

The NewsGuild-CWA also issued a statement condemning the deliberate targeting of journalists who are covering protests against police brutality. "Attacks against members of the press, violence against Black communities, and brutality against peaceful protesters have no place in our democracy," said Schleuss. 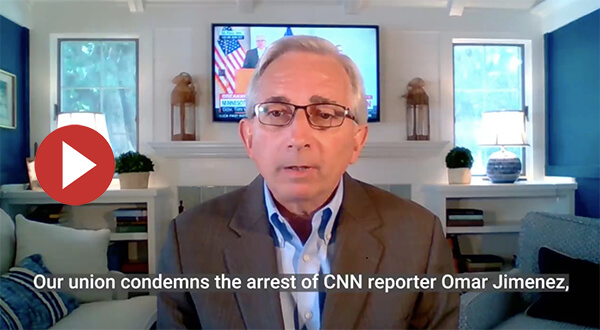