This week, CWA Secretary-Treasurer Sara Steffens joined Reps. Andy Levin (D-Mich.) and Brian Fitzpatrick (R-Penn.) for a virtual press conference on the reintroduction of the bipartisan Secure And Fair Elections for (SAFE) Workers Act. This crucial bill removes the ban on electronic voting in NLRB representation elections, making it safer for workers to join unions during the pandemic, and streamlines the process of holding union elections.

"During a public health crisis, the freedom of workers to join unions and negotiate with their employers is even more important than ever," said Steffens. "As millions of workers are losing their jobs or being forced to take pay cuts or furloughs – and as many other workers are forced to work without adequate safety precautions under threats of losing their job during an unprecedented economic crisis – the freedom of workers to organize in the workplace must be protected."

Steffens also talked about how CWA members are mobilizing to pass the Protecting the Right to Organize (PRO) Act, a sweeping labor reform bill to make it easier for workers to join unions and bargain with their employers that Reps. Levin and Fitzpatrick have strongly supported.

"We'll be counting on your support again to get it signed into law," Steffens said. "The SAFE Workers Act and the PRO Act would make a world of difference for millions of workers across this country. We at CWA are glad to have the leadership of members of Congress like Reps. Levin and Fitzpatrick working together to get these two bills signed into law, and CWA members are ready to do whatever it takes to make it happen." 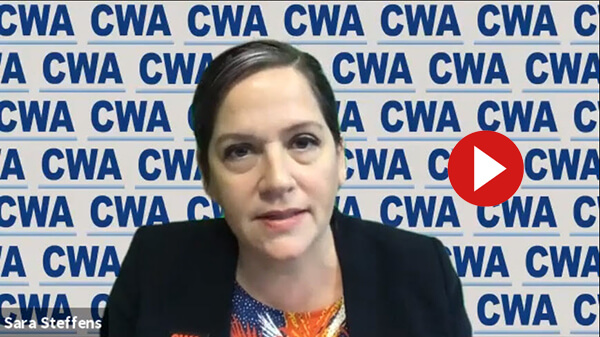 CWA Secretary-Treasurer Sara Steffens spoke at a virtual press conference on the reintroduction of the bipartisan Secure And Fair Elections for (SAFE) Workers Act to make it easier for workers to join unions.