Last week, CWA Secretary-Treasurer Sara Steffens was featured on a Protecting the Right to Organize (PRO) Act national virtual townhall co-hosted by CWA, the AFL-CIO, and the International Union of Painters and Allied Trades (IUPAT).

As union members start a big push to pass the PRO Act, historic legislation that will put power in the hands of workers and reverse decades of legislation meant to crush unions, leaders from across the labor movement were joined by congressional allies, including House Education and Labor Committee Chairman Bobby Scott (D-Va.) and Congressman Conor Lamb (D-Pa.), to talk about how crucial it is for the labor movement to get the PRO Act passed, and how we do it.

"We at CWA are ready to do everything within our power to win," Steffens said. "If each and every one of us does our part to show corporations what real solidarity looks like – and that means all of the pro-labor Democrats we worked so hard to elect, the entire labor movement, its leaders, and rank-and-file members – we will win. Millions of working people are depending on the Democrats, and on us, to get this done. So let's get it done." 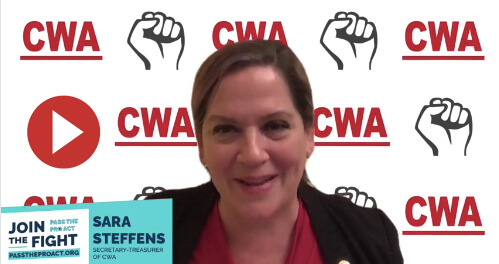