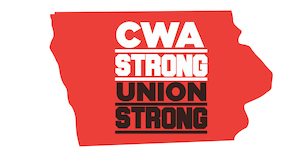 The votes have been counted, and all 21 Iowa CWA public sector bargaining units have voted overwhelmingly to keep their union! The vote was a massive, resounding win for Iowa CWAers against a Republican governor and state legislature that have been determined to gut workers' rights.

Last year, Iowa Republicans passed a draconian bill to strip collective bargaining rights from public workers. In addition to banning public workers from bargaining on anything other than base wages, the legislation requires public sector unions to be recertified prior to every contract negotiation and institutes other extreme provisions to take away workers' rights.

Bargaining units have to vote to retain their union approximately 10 months prior to the expiration of their contract.  All of the 21 CWA bargaining units who voted to keep their union, including nurses, social workers, public safety workers, library workers, county employees, and school employees, have contracts that expire June 30, 2019, and can now proceed to bargain new contracts.

This year, more than 90% of Iowans who voted in retention elections voted "yes" to keep their union, proving that this new law is a waste of taxpayer dollars only meant to try to weaken and bust unions. In the majority of cases, it has only made us stronger. Iowa workers are showing that they are willing to fight to keep their rights and have a voice on the job!