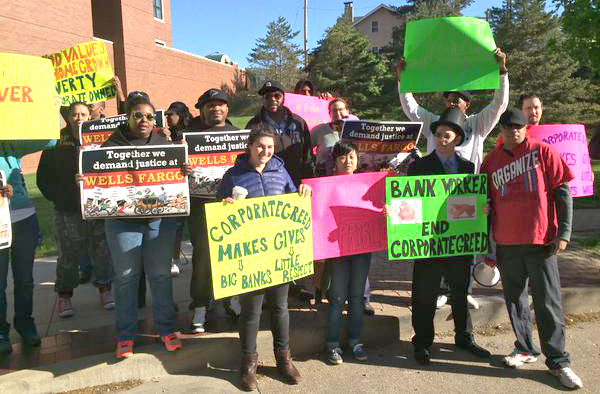 Gathered in Clayton, Mo., they called on Wells Fargo to reform its unreasonable sales goals and quotas. Both consumers and employees suffer under the pressure to push predatory products like high-interest credit cards, activists said, outside and inside the meeting.

Their message broke through. CEO John Stumpf publically addressed their concerns that the bank cares more about profits than people, saying, "We never want to put our team members in a position where they need to make incentive goals to make the rent payment."

We'll be holding him to that.

Bank workers expect better. Wells Fargo has raked in hundreds of billions in profit and pays Stumpf a staggering $23 million a year. But tens of thousands of frontline Wells Fargo employees do not share in that success. Half of all bank tellers are paid $12.25 per hour or less, and 31 percent of tellers rely on taxpayer-funded programs like food stamps to support their families, according to a new report by the Center for Popular Democracy.

The same report reveals that Wells Fargo and the nation's biggest banks are all forcing tellers, customer service representatives and loan interviewers to hawk unneeded and unnecessary products.

Earlier this month, rank-and-file workers stormed Wells Fargo's offices in Minneapolis and St. Paul, Minn., and attempted to deliver an 11,000-signature petition calling for an end to these destructive sales goals. Soon after, the bank finally admitted it needed to look into its policies, telling Reuters, "We take that deadly seriously."

It's more proof that these bank workers have Wells Fargo's attention.