This week, the WAGE Act – Workplace Action for a Growing Economy – was introduced by Senator Patty Murray (D-Wash.) and Rep. Bobby Scott (D-Va.) "The system is broken, and needs to be fixed," they said. The bill will strengthen protections for working people who want to join unions and establish real penalties and consequences for corporations that violate working people's rights. 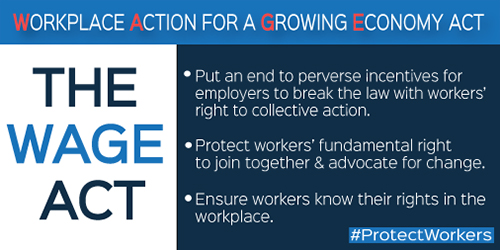 AFL-CIO President Richard Trumka said, "The economy is a set of rules that for too long has been rigged against working people. The WAGE Act is about changing these rules."