SuperShuttle drivers, members of CWA Local 7777, recently launched a series of public demonstrations to raise awareness about the company's unmerited proposal to cut their pay by 30 percent.

SuperShuttle drivers, members of CWA Local 7777, recently launched a series of public demonstrations to raise awareness about the company's unmerited proposal to cut their pay by 30 percent. 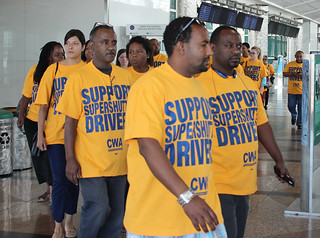 SuperShuttle drivers, members of CWA Local 7777, and supporters from the Denver community and labor movement, hold a silent protest in Denver International Airport over a 30 percent cut the company implemented.

"They knew doing this would be a big deal, so they wanted to say, 'Even though we're across the ocean, we stand with you guys.' That was really awesome," District 7 Organizing Coordinator Al Kogler said. 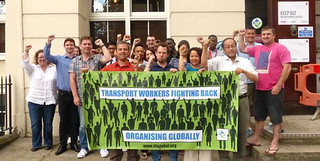 Members of the International Transport Workers Federation (ITF) and affiliated unions from around the world show their solidarity with SuperShuttle drivers. SuperShuttle is owned by the French firm Veolia.

Drivers also rallied their union brothers and sisters at NEA's annual convention in Denver last weekend. NEA President Dennis van Roekel talked about the drivers' struggles from the podium. He urged delegates to sign a petition and palm cards asking management "to return to the bargaining table" because "every worker deserves a voice on the job and the protection of a contract." At the end of convention, departing NEA members requested blue van service to the airport and decorated their bags with bright yellow luggage tags reading, "Standing with Denver SuperShuttle Drivers."

And last month, Jobs with Justice helped drivers hold a Workers' Rights Board, a public forum for workers to bring complaints against employers for violating their human and legal rights. The Boulder Weekly reported:

Noureddine Berezqi came from Morocco and began with SuperShuttle in 1997.

"Drivers were able to work comfortable schedules in order to fulfill their personal financial needs," he said.

After the French multinational Veolia purchased SuperShuttle in 2002, drivers in Denver saw their income fall when SuperShuttle began contracting with more franchisees, which reduced opportunities for fares. Drivers now put in 60-hour weeks, working six to seven days each week. 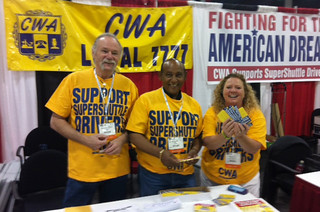 CWAers distribute luggage tags and materials to members of the National Education Association who were meeting in Denver. At the airport, NEAers showed their support for the drivers' fight for a fair contract.

"Exhausting schedules left workers no time for bathroom breaks while working 10- to 12-hour shifts," Berezqi said. "There were harsh new disciplinary actions with no justification. The company began firing and suspending drivers without cause or for minor infractions."

Berezqi said there was verbal abuse with racial and religious slurs. The majority of Denver SuperShuttle drivers are black African immigrants. Many are Muslims. There was a supervisor who joked about the high turnover of drivers by saying "Muhammed comes, Muhammed goes" and "Monkey comes, monkey goes."