At a briefing on Capitol Hill for members of Congress and staff, Angela Simler, who works at the T-Mobile call center in Wichita, Kans., described her highly stressful workplace as one where managers keep tabs on everyone, to make sure not only that they are hitting corporate benchmarks, but that they are not discussing job conditions or trying to form a union.

"The fear of unionizing at T-Mobile has been going on too long," Simler said. "The fear of repercussions, of losing their jobs has made a pretty huge impact on organizing, on getting new active members of TU. My goal is to really make sure that T-Mobile employees have a voice, that they are able to have a hand in their future."

The briefing was organized by CWA and convened by Rep. Mark Pocan (D-WI 2nd District). Pocan recounted how T-Mobile's parent company, Deutsche Telekom, had promised Congress two decades ago, when it was trying to enter the American wireless market, that it would show the same respect for workers' rights in the U.S. that it does in Germany. DT has broken every promise it made, Pocan said.

As Joshua Coleman, a former Wichita call center employee who now works to help T-Mobile workers get their union voice, pointed out, T-Mobile US's national campaign to block workers' rights includes surveilling workers, arbitrary punishment and summary termination of workers simply for talking to each other about job conditions. 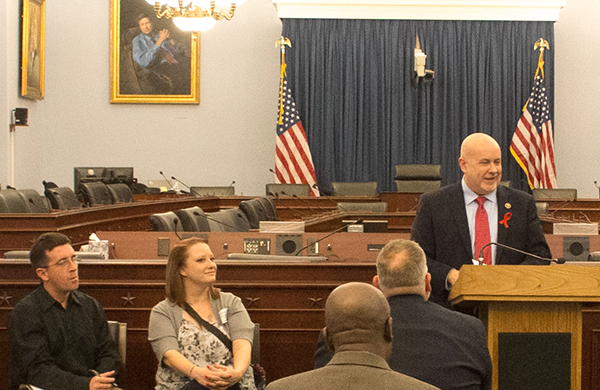 Joshua Coleman, a former Wichita call center employee who now works to help T-Mobile workers get their union voice, and Angela Simler, a T-Mobile Wichita, KS, call center worker, as they were introduced by Rep. Mark Pocan (D-WI) at a Hill briefing.

Emily Martin, vice president and general counsel at the National Women's Law Center, said a pernicious effect of preventing workers from discussing workplace issues is that individual workers might wrongly blame themselves for what happens on the job. If they are able to talk to each other, they might find out the problems are systemic and affect others, she said.

The National Women's Law Center, the AFL-CIO and seven other leading women's organizations have called on German Chancellor Angela Merkel to pressure T-Mobile to abandon an employee gag order policy that violates U.S. law and restricts workers' ability to address sexual harassment and other workplace violations. The German government is a major shareholder of T-Mobile parent DT.

"Workers' ability to come together as a group to challenge sexual harassment and other forms of discrimination is really critical to ending that discrimination," Martin said.

Pocan said DT has repeatedly dismissed these concerns even as Members of Congress, labor leaders, and others have appealed to the German giant to live up to its social responsibility commitments and rein in T-Mobile. A group of 25 U.S. Congresswomen also wrote to Merkel, calling on her to take action.

"Companies shouldn't treat their employees like this, whether you work for an American company or a subsidiary of a foreign company operating here in the U.S.," Pocan said at the start of the briefing. "Basic worker rights as defined by the National Labor Relations Act or more broadly by the International Labor Organization must be adhered to. T-Mobile's broken promises and their apparent lack of concern for basic worker rights is why it's important to hear these stories from the workers that are gathered here today."