CWA Local 1400 members came out to show support for Angela Agganis, a former T-Mobile customer service representative who worked more than eight years at the First Park call center in Oakland, ME, at a news conference on Tuesday. 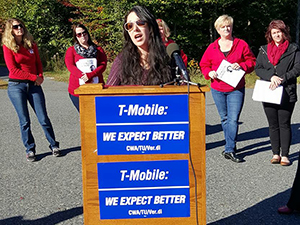 CWA Local 1400 members supporting Angela Agganis at her news conference on Tuesday where she announced she is suing the corporation.

Agganis, who resigned her T-Mobile post after being forced to sign a gag order when she reported to human resources that she had been sexually harassed by her supervisor, announced at the press conference that she will file a lawsuit against the corporation this week. The corporation's human resources department, rather than come to her aid, threatened to fire her if she talked to her coworkers about the matter. In August, a National Labor Relations Board judge vindicated Agganis with a ruling that T-Mobile violated U.S. labor law when it required her to sign that confidentiality agreement and threatened her with discipline.

The judge ordered T-Mobile to rescind the policy and notify its employees of the rescission and their rights. But this remedy applies only to the call centers in Maine and South Carolina. T-Mobile workers at all other locations are not covered by the judge's order. Yet they also deserve to know that this policy is illegal and that they have the right to speak to each other about workplace issues like sexual harassment. The press conference called on the company to do the right thing and rescind these policies across the country and inform all employees of their rights.

T-Mobile has a pattern of policies that silence workers. National Labor Relations Board judge Christine Dibble ruled in March that T-Mobile US engaged in nationwide labor law violations that were directed from the very top of the company in Bellevue, Wash., finding that 11 of the 13 corporate policies or provisions at issue before her were illegal because they interfered with workers' rights to communicate with each other and organize. T-Mobile still has not taken action to address the violations.

The Maine Women's Lobby has also called on T-Mobile to change its ways.

"The Maine Women's Lobby calls upon T-Mobile to do the right thing and guarantee that when women choose to speak up against sexual harassment they aren't threatened with discipline. This outrageous policy needs to end today," Executive Director Eliza Townsend said.

Media coverage of the news conference: