At midnight on Saturday evening, Aug., 1, contracts covering 29,000 CWAers and another 10,000 members of the International Brotherhood of Electrical Workers expire, along with the contract covering about 80 Verizon Wireless technicians in District 1.

Over five weeks of bargaining, a very profitable Verizon has made extreme demands for concessions. The company that just posted $4.4 billion in profits for the second quarter of 2015 alone ($9.6 billion for all of 2014), and provides very generous compensation to executives, continues to:

Last Saturday, 12,000 CWA and IBEW members jammed the streets near Verizon headquarters in New York City in a mass mobilization for fairness at Verizon. From Virginia to Massachusetts, CWAers traveled by bus, train and van, from every local, to make our message clear: it's our turn. This wealthy company needs to bargain a fair contract and ensure quality customer service by maintaining the copper network and building out high-speed fiber optic networks that customers want. Elected officials and other supporters joined the rally to, showing their support for our fair contract fight. 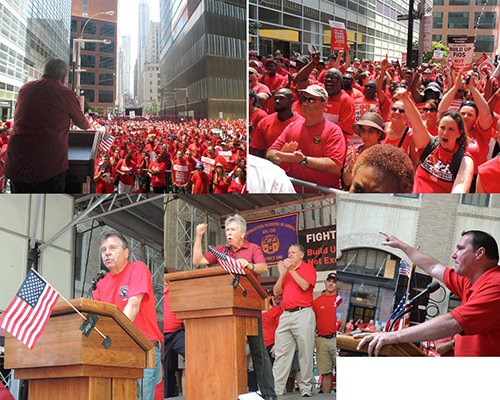 CWA and IBEW Verizon workers and supporters filled the streets of New York City as they rallied for a fair contract at Verizon. Bottom row, from left: CWA VP Dennis Trainor, District 1; President Shelton, and CWA VP Ed Mooney, District 2-13, all fired up the crowd.

By an 86 percent vote, CWAers put Verizon on notice that members authorize CWA leaders to call a strike if a fair contract isn't reached.

And listen to these radio ads now airing throughout the Verizon footprint.