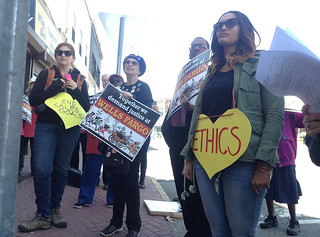 In Irvington, N.J., bank workers and supporters call for justice at Wells Fargo. 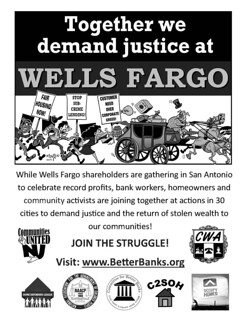 This week, the Committee for Better Banks, a labor and community coalition that CWA is helping to lead and support, held actions nationwide to focus public attention on Wells Fargo practices that are harming communities, consumers and workers.

In more than 30 cities, labor, consumer and community activists were joined by elected officials in spotlighting Wells Fargo lending and foreclosure practices that are evidence of the company's culture of profit over people. The National Day of Action Against Wells Fargo was held as shareholders met for the bank's annual meeting in San Antonio, Tex. "While Wells Fargo shareholders are gathering in San Antonio to celebrate record profits, bank workers, homeowners and community activists are joining together to demand justice and the return of stolen wealth to our communities," the Committee said.

In Irvington, N.J., bank workers, homeowners and community leaders rallied, marched to the Wells Fargo branch and delivered more than 4,000 petitions to bank officials, calling for an end to the bank's predatory practices. The petitions included the signatures of 1,300 Wells Fargo employees,

Bank workers testified to the company's demands that workers push financial products onto customers who don't need them. "Wells Fargo is reaping record profits while low-wage bank workers do the dirty work of exploiting their customers. It's not right and this is why I'm speaking out," said Jonnelle Rodriguez, a former Wells Fargo teller and a member of Committee for Better Banks.

They describe their work environment as a "pressure cooker," with constant pressure by management to make more sales taking a toll on workers and customers.

Irvington Mayor Wayne Smith called on Wells Fargo to do the right thing. "With the company reporting record profits, we hope that Wells Fargo will utilize the spirit of the Community Reinvestment Act and assist people so that they may stay in their homes." Wells Fargo has been forced to pay out $224 million in settlements to homeowners since 2009 for predatory lending practices, especially for practices targeting veterans and communities of color that resulted in widespread foreclosures. Currently in Irvington, more than 100 homeowners are in foreclosure to Wells Fargo. 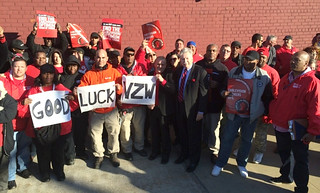 Cablevision techs, members of CWA 1109, who are in a tough contract fight, send a message of support to Brooklyn Verizon Wireless workers.

Actions were held in St. Louis and Minneapolis, and petitions also were delivered to Wells Fargo headquarters in San Francisco and in other cities.

May 14 is Election Day for 63 workers at seven Verizon Wireless retail stores in Brooklyn. They've been getting lots of support from New York AT&T Mobility members, and from Cablevision workers who are standing strong in their own contract fight.