An amazing line-up of Members of Congress, union activists, environmental leaders, people of faith, small business and community leaders stood together on Capitol Hill today to show the broad and growing opposition to Fast Track authority for trade deals like the Trans-Pacific Partnership.

“America will never see a raise for American working families if we continue to make trade deals like we have in 20 years since NAFTA,” CWA President Larry Cohen said. “80% of Americans have had no raise in 30 years. . . . We have to stop trade deals that only move in one direction.”

More than 18 congressional representatives and leaders from the NAACP, Food and Water Watch, Sierra Club, Consumers Union, the National Catholic Social Justice Lobby NETWORK, and other groups joined the event, calling for the defeat of Fast Track.

NETWORK’s Executive Director Sister Simone Campbell, popularly known as the leader of "Nuns On The Bus," said the effects of our past trade deals have been coming home to roost. She pointed out that children from Central America swarmed the U.S. borders last year directly because the Central American Free Trade Agreement disrupted the economies in rural areas of those countries.

"I'm here today to oppose fast track because we know from Catholic sisters in Central America, my sisters in Mexico, that these trade agreements create a huge imbalance and disequilibrium, especially in rural communities," she said.

An alliance of Big Business and White House negotiators are scrambling to push fast track authority through Congress. Why Fast Track enables supporters to push through trade deals which no one in Congress has read with a majority vote. In the Senate, nearly all others bills require 60 votes and most of our issues have been blocked by this super majority requirement. Yet fast track only requires a simple majority of the House and Senate.

Rep. Rosa DeLauro (D-Conn.), who is leading Democratic House members in the fight against Fast Track, said she is not going to stand for a bill that allows bad trade deals to be crammed down the throats of Americans without Congress examining them. American workers, she said, have suffered great harm under the North American Free Trade Agreement and other deals like it and their representatives in Congress have the Constitutional duty to consider carefully the consequences of future deals.

“This coalition exists because trade deals affect everything. We need to be able to scrutinize the text of these deals page by page, line by line, word by word. . . . We need to read this bill as we would any piece of legislation, let alone legislation with such far reaching implications,” DeLauro said.

CWA is part of a 100- group coalition that is fighting back against Fast Track, and the next 100 days are critical. Fast Track authorizing legislation is expected to come before Congress in March. 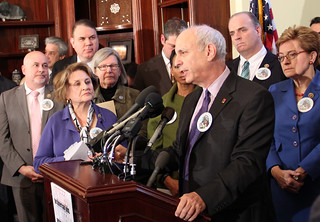 Cohen said the road forward is daunting but winnable if the coalition functions as one.

“We're prepared in every district to work as a coalition, not silo-ed as labor, or farmers, or consumers, or environmentalists, but together to talk about what the global economy should be and how it could work for all of us,” he said. “We are humble about what we face but we are tens of millions of Americans and we are committed that we are not going to have another raw deal on trade. We're going to come to the 21st Century and negotiate trade deals that work for tens and millions of Americans, not just for hundreds of corporations.”

CWAers and activists from coalition members will participate in National Call-In week, beginning Jan. 26, to let members of Congress know that Fast Track must be stopped. Check out www.stopthetpp.org for more information.