Chicago Mayoral Candidate Jesus 'Chuy' Garcia, here with CWA President Larry Cohen, CWA Senior Director Yvette Herrera and CWA Political Director Rafael Navar, visited CWA Headquarters on a recent trip to Washington, D.C., to share with supporters his roadmap to victory. Garcia shook up the Democratic establishment this winter by forcing incumbent Mayor Rahm Emmanuel into a runoff. CWA was one of the first labor unions to endorse Garcia during the non-partisan primary. 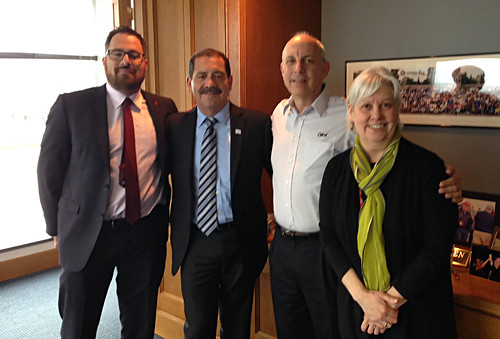 Garcia continues to thrive despite the overwhelming financial resources of Rahm Emmanuel, an incumbent that many call "Mayor 1%." Emmanuel earned his name because his policies favor the rich at the expense of people of color and working people in Chicago. Many unions as well as working people and political leaders from communities of color and progressive organizations are now not only endorsing Garcia, they are helping him fight against Emmanuel's campaign war chest and his well-funded SuperPAC that is blanketing Chicago airwaves with negative advertising, attacking Garcia and misrepresenting his positions on issues.

Whatever the outcome of the April 7 runoff, Jesus 'Chuy' Garcia is showing the power working people, people of color and progressives can exert when they vote their principles.