German giant Deutsche Telekom got a big surprise this week when over a thousand international trade unionists and activists rallied outside its Berlin offices to protest the virulent anti-labor practices of its U.S. subsidiary T-Mobile US.

German giant Deutsche Telekom got a big surprise this week when over a thousand international trade unionists and activists from the German union ver.di, employees of DT, rallied outside its Berlin offices to protest the virulent anti-labor practices of its U.S. subsidiary T-Mobile US. 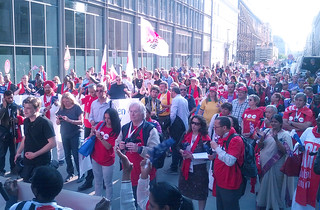 ver.di members and union activists from around the globe demonstrate outside Deutsche Telekom in Berlin.

"This is a message of resistance from America," CWA President Larry Cohen said, in a challenge to DT's Chief Executive Officer Timotheus Hoettges. "When you attack, we stand up and we fight back."

T-Mobile supervisors have been harassing workers in the United States for daring to organize their workplaces, including subjecting some, like a group of Harlem, NY, retail store workers, to repeated captive audience interrogations. T-Mobile has illegally disciplined and fired other activist workers, including Josh Coleman, who participated in this week's Berlin rally. 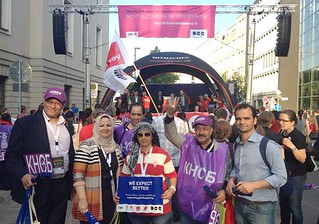 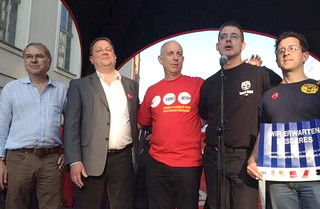 Cohen said the rally grew out of frustration with DT's stubbornness in responding to ver.di's efforts to help U.S. workers exercise their rights. Hundreds of trade unionists from all over the world, attending the weeklong International Trade Union Confederation conference in Berlin, joined more than 1,000 ver.di members protesting in support of T-Mobile US workers who are fighting for their right to form a union.

Messages of solidarity from Arab unions, activists in the Indian trade union movement, British union leaders, U.S. and European activists and many others from around the globe lit up Twitter with support for T-Mobile US workers. Members of the German Parliament also joined the protest, calling on DT to follow its social compact, which calls for full recognition of workers' rights to union representation, and stop T-Mobile's abusive labor practices in the U.S.

Cohen said that T-Mobile US workers will be in this fight "one day longer and each day stronger."