Four Members of Congress today demanded the USTR stop trying to snow the American people and Congress with skewed statistics as he attempts to rationalize the TPP.

"They're cooking the books to justify this race to the bottom," Rep. Barbara Lee (D-CA) said at a news conference, joined by Rep. Rosa DeLauro (D-CT), Marcy Kaptur (D-OH) and Paul Tonko (D-NY). 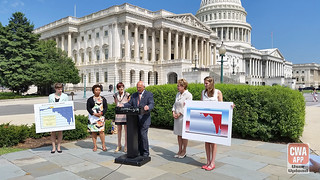 With the U.S. Capitol as backdrop, the four announced that they and ten other colleagues signed a letter to Ambassador Michael Froman, the U.S. Trade Representative, demanding that the agency stop counting foreign-made goods that pass through the United States on their way to another country as American imports.

A true view of trade data shows that USTR claims that the United States has run trade surpluses with our North American Free Trade Agreement (NAFTA) partners over the last 20 years are nonsense and should be disregarded as the U.S. negotiates the new Trans-Pacific Partnership agreement.

"Cargo being unloaded at the Port of Oakland and trucked to Mexico are not U.S. exports," Rep. Lee said. "What this shows is that they are playing with the numbers to make it look better."

The letter further expresses the Members of Congress' concern that the incorrect and skewed data "might paint a rosier picture of the impact of free trade agreements than reality suggests."

"Isn't it interesting that we are arguing about goods, not jobs," Rep. Kaptur said. "The United States Trade Representative does not count people."

Rep. Tonko said his district in Upstate New York has lost thousands of manufacturing jobs since NAFTA was signed 20 years ago, and working Americans should demand the truth about job impacts from their government when it negotiates new trade agreements.