CWA and the National Education Association are filing a lawsuit to block NJ Governor Chris Christie's plan to grab nearly $2.5 billion that should be going to the state's pension system.

CWA and the National Education Association are filing a lawsuit to block NJ Governor Chris Christie's plan to grab nearly $2.5 billion that should be going to the state's pension system. Christie wants to use those funds to reduce his budget's shortfall instead of making the required payment to the pension system. CWA and NEA are the two biggest unions in the state. 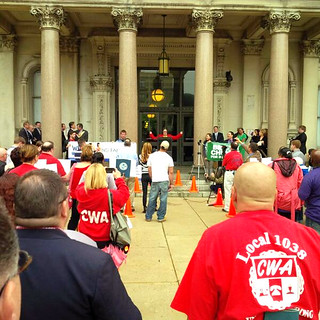 CWAers and union activists meet outside the statehouse in Trenton, N.J., ready to lobby elected officials about the damage being done to workers' pensions.

"Governor Christie is not only breaking his word, but he's also breaking the law in failing to make these pension payments," said Hetty Rosenstein, CWA New Jersey Director. "Put aside how Christie's actions are immoral. If the pension payments are not made, the plan will go bankrupt. Retirees and active workers will spend their retirement in poverty through no fault of their own. For these reasons, and more, we are taking the governor to court. And we will be mobilizing our members and allies in protest of Christie's outrageous, illegal actions."

In 2011, Christie and some legislators pushed through big cuts in public workers' pension benefits. Workers' pension contributions were increased, the retirement age was raised and cost-of-living adjustments were eliminated. Christie and the lawmakers who supported him claimed that the changes were necessary to restore the security of the pension system and they also pledged that the state would begin to make bigger payments each year to the pension system, to make up for the complete lack of contributions by the state for most of the past 17 years. Workers continued to make their contributions.

Now Christie is reneging on the state's obligation and putting public workers' pensions at risk. The state estimates that it's unfunded pension liability is $52 billion.

Thousands of activists, from CWA, other unions and allies, held a "Lobby Day" today in Trenton, to focus attention on the governor's power and money grab.