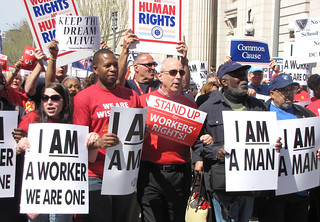 CWA President Larry Cohen, shown with other activists at a rally, will not run for reelection.

After much thought, I have decided not to seek re-election next June as President of our union. I informed the Executive Board at our meeting Sept. 18.

This is the tenth year I have been honored every day to serve as President of our union. I am proud of all of you and the work we have done together for decades.

President Cohen on the Ed Show

Katie Shannon, though very young, is union to the bone. Her mom and dad are longtime union members. In fact, so is every relative she could think of – grandparents, uncles and aunts.

"My dad's entire side of the family worked in the union, for CWA, and some of them still do," Katie said. 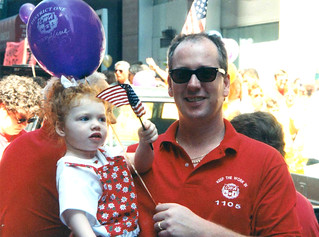 So you can imagine the poor girl's confusion when confronted by an uncle who did not have health insurance.

"I was like, what do you mean? That doesn't make sense," she said. "Union was all I knew. I didn't even know people weren't in unions until he told me he didn't get benefits."

Katie Shannon is a young woman now, a recent graduate from Buffalo State College, and she is working at CWA headquarters in Washington, D.C., as an intern in the Legislative Department. She is involved in the fight to help ensure that generations to come will have access to the security that she has known all her life growing up in a CWA union household.

Even before knowing what it meant, she remembers being surrounded by CWA, from its notepads that she did homework on, to the huge CWA 1105 blankets that she slept on. She became exposed to other unions too when she worked in high school as cashier at the local A&P grocery store chain during winter break and summer holidays. It reinforced for her the importance of the security that she might have otherwise taken for granted.

"I like working for people's rights," she said. "It's the right thing to do. Everyone should have the rights and protections that being a union member gives you. I would like to stay in a union." 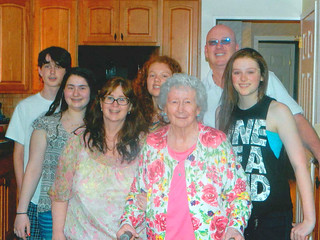 2014 Mother's Day photo with Grandma Jean Shannon, who was an AT&T operator and union member. So was her husband, John Shannon, a veteran of the Great War who died in 1973. Also in the photo, Aunt Margaret Scandora, who was a union worker with AT&T, with her daughter, Gina Scandora, 14. Also in the photo is Heather, 17, and Bobby Shannon, 15, a sophomore in high school.

Childhood home life, she remembers, was centered on 'Buy American.'

"My parents always bought me clothing that was American made. I remember I wanted this sweatshirt from Limited II and my dad said I couldn't have it," she said, wistfully, but she also understood, at least now, what her father was talking about.

She remembers her dad always on the phone trying to help workers with problems and all the union members who came to their house. They would always speak so highly of being union members. Then, there were the union rallies, which she has attended all her life.

Her mom, Colleen Shannon, was CWA Local 1105's secretary until Katie's birth 21 years ago. Her dad, Robert Shannon, currently vice president of CWA Local 1105 in New York City, is very proud his oldest child is working for the union for which he has devoted 35 years of his working life.

"Now that she's an adult, she sees that the fight is still going on," the Mr. Shannon said. "She is seeing such a broad area. She sees that not only is CWA fighting for current members and organizing new members, but we are also taking care of retirees, too."

Dallas Morning News: Can Unions And Big Business Be Friends?

Many believe that unions are a drag on business because they drive up costs, resist change and limit flexibility. In right-to-work states, where unions are a smaller factor, economic growth has been stronger.

But AT&T and the CWA offer a counterpoint. Their long-term relationship benefits employees and the company, and one expert said it gives AT&T an edge in the marketplace.

"AT&T's business strategy is built on generating higher revenue instead of competing on the lowest-cost commodity," said Rosemary Batt, a professor at the ILR School at Cornell University.

That's possible, she said, because AT&T has a stable, skilled workforce that can deliver higher-quality service. In most nonunion shops, she said, employee turnover is three to five times as high, especially in call centers.

Why is turnover lower among union workers? They get higher pay and benefits, and they have a formal mechanism to solve problems on the job, Batt said.

That requires more give and take from leaders – and more management skill – but it improves employee buy-in. Over the long haul, that can be worth the higher labor costs, she said.

'Hands off Social Security and Medicare!!'

CWAers, including retirees, joined dozens at a U.S. Capitol rally last week to tell Tea Party Republicans to keep their hands off Social Security and Medicare and to protect the programs from benefit cuts, privatization and being vouchered. 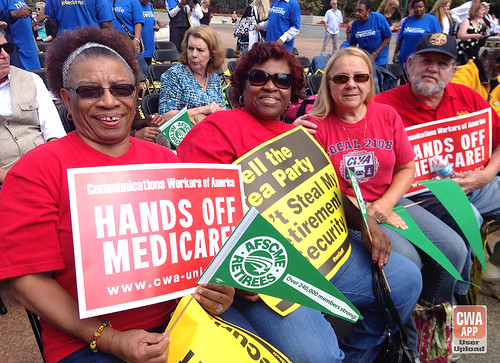 Besides Warren, House Minority Leader Nancy Pelosi and other members of Congress addressed the rally, which was sponsored by a coalition of labor and other advocacy groups, including CWA, the Alliance for Retired Americans, National Education Association, and Social Security Works. 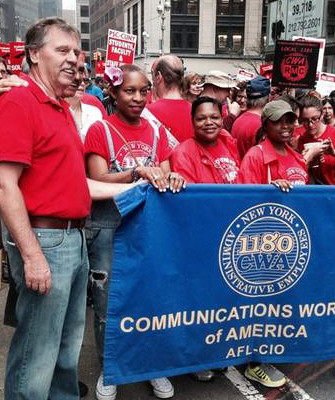 In the biggest single mobilization of climate activism in history, 400,000 people – including a strong contingent of CWAers – packed New York City streets for the People's Climate March, demanding that world leaders finally get serious about global warming. 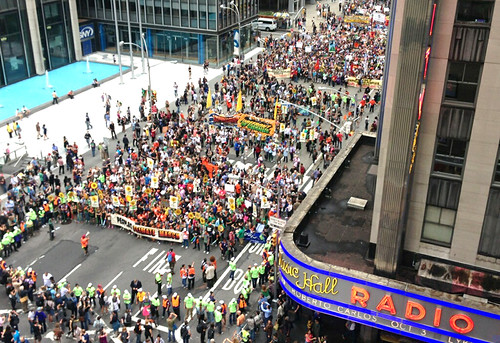 In a National Labor Relations Board election, workers at the Monroe Free Library in Poughkeepsie, NY, voted 11 to 0 this week to become CWA Local 1120 members. Local 1120 President Frank Fauci and Executive Vice President Jim Gescheidle worked with a very strong inside committee on the campaign.

The library board first forced CWA Local 1120 into a federal hearing that CWA had to win just in order to have the election. The library workers had to go through two battles just to get basic, fair representation. The third round now begins as they negotiate a first contract.