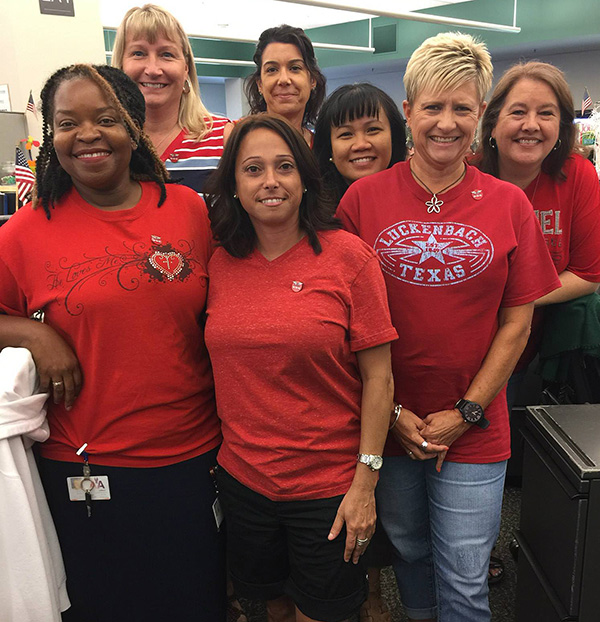 Passenger service agents from CWA Local 6001 who handle groups and meetings travel at the Dallas reservations office show solidarity in their fight for a good contract. 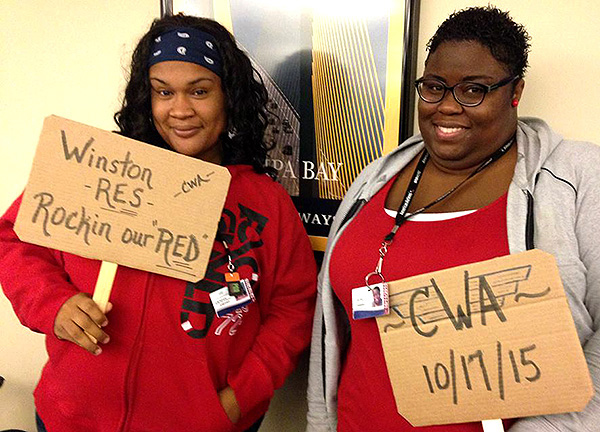 In a crucial week in the negotiations, the CWA bargaining team in Dallas is exchanging proposals on important articles in the contract, including wages, scope and classification and health care, among others.

Meanwhile, reservations and home-based agents are mobilizing. Just this week, they launched a petition educating the public about their fight for good jobs and quality service at American Airlines.

The agents have been wearing buttons and carrying home-made signs with 10/17/15, the date that the American Airlines-US Airways merger becomes final. Last week, agents at all American call centers — Winston/Salem and Raleigh/Durham in North Carolina and Dallas, TX — along with home-based agents in Dallas/Forth Wort, Raleigh/Durham, Hartford, Conn., Miami and Norfolk, Va., stood up every two hours and held up signs with messages like “We Support Our Bargaining Team” and “We Need an Industry-Leading Contract.” See them on Facebook at https://www.facebook.com/AmericanAgentsConnected

Above, CWA members at Local 3201 wore red to work last Thursday at their AT&T call center to show their support for the bargaining team.


Below, CWA Local 3122 members, who have been doing daily informational picketing, hold a mobilization rally for a fair contract at Tropical Park in Miami, FL. 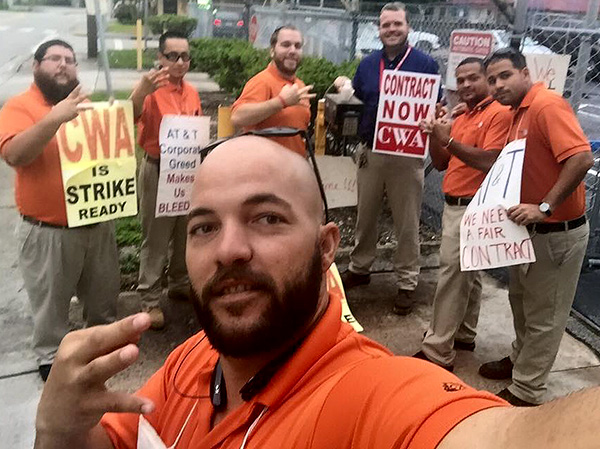 More than a month after their contracts expired, AT&T Southeast members keep doing their jobs even as their bargaining team field one insulting proposal after the other from their employer at negotiating sessions.

Morale is still high because the workers know what is at stake and they continue mobilizing. CWA Local 3607 President Jocelyn Bryant said, “the local’s members will soon begin a campaign of letter writing to their members of Congress to keep them informed of what has been going on in negotiations, especially the lack of progress.”

Members have also continued wearing specific color clothing on specific days — such as blue on Mondays, white on Wednesdays, red on Thursdays, and black on Fridays, with inside techs wearing orange — as a show of solidarity.

Bryant said turnout has been high at mobilizing classes where members get to meet counterparts from other work sites.

"We hope to show the company that we matter,” she said. “We want the company to know that we don't like this and we're not going to stand for it anymore. We want the workers to know that if they don't pay attention and stand up for what is theirs, they are going to lose a lot of things. The company will try to take back things, including some of the health care benefits. The pay raises are not going to be as good. They'll lose some of the respect that they have at work right now.” 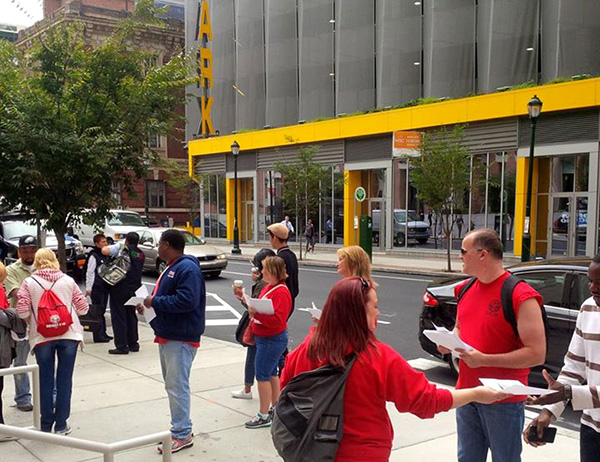 Above, CWA Local 13000 and Local 13500 members leafleted a conference of Catholic families to ask for support in negotiations with Verizon. 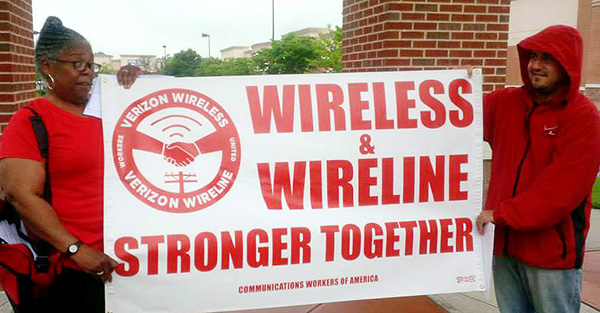 Members of CWA Local 13000 and Local 13500 turned up in Philadelphia on Tuesday at a convention for the World Meeting of Families, the world’s largest Catholic gathering of families, asking participants to support Verizon workers and their families as they bargain a contract with the corporation.

CWA Local 13500 President Julie Daloisio, who passed out leaflets to people from across the nation and other countries attending the conference, said they received positive feedback.

“We thought what a place to do this,” Daloisio said. “We've been in negotiations with Verizon for several months, a profitable company that is trying to cut jobs and benefits. Verizon’s new slogan is 'Better Matters' but cutting jobs for families is not better.”

Shelton: Deutsche Telekom Can Do Better 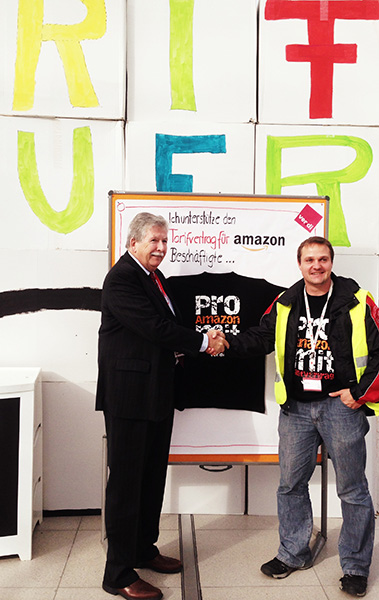 Above, CWA President Shelton meets with picketing Amazon workers in Germany who have gone on strike this week at six fulfillment centers. Ver.di is demanding a labor agreement for the 10,000 German employees. Read more here.

Delegates at ver.di's annual convention give Shelton a standing ovation. 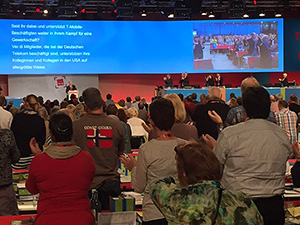 Speaking in Leipzig, Germany, CWA President Chris Shelton put Deutsche Telekom on notice that workers on both side of the Atlantic are united against the company’s anti-worker tactics in the United States.

Shelton was speaking to 2,000 members and delegates attending the annual convention of ver.di — the world’s largest service sector union representing 2 million German workers. Shelton thanked ver.di union members for their support of T-Mobile US workers in their fight to end the intimidation, harassment and bullying by T-Mobile US management of workers who want a union voice.

This week Shelton will meet with German elected officials and visit a picket line at Amazon to talk with striking workers. In Berlin, he’ll meet with members of the Bundestag, the German Parliament. A Bundestag committee is considering our petition calling on the German government to use its shareholder power to press Deutsche Telekom to enforce international labor standards at its locations abroad.

Together, ver.di and CWA members have already collected 45,000 signatures. A committee of German legislators will bring up the petition for consideration again on Nov. 30, so there's still time to gather additional signatures to build our case.

Building a Chair Fit for a Pope 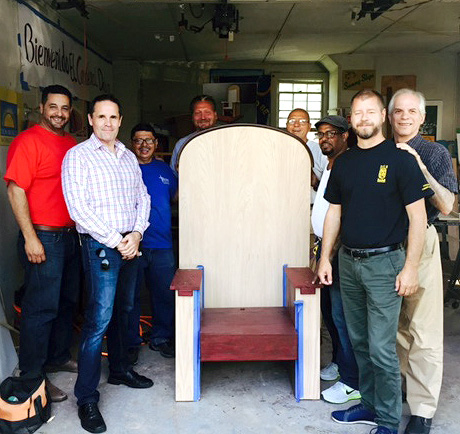 Representatives from the Swedish Painters Union, who were visiting CWA Local 1103, with two of the workers who built the Pope’s chair gather around the nearly finished project.

On Friday, September 25, Pope Francis will transform Madison Square Garden into a house of worship. And at the center of the celebration will be a papal chair built in CWA Local 1103’s garage.

It all started more than a year ago when the local partnered with the Don Bosco Worker Center on an anti-wage theft campaign in its hometown of Port Chester, NY. As the “No Pay No Way” campaign garnered positive publicity, people and organizations from around the country took notice. One of those supporters was the Archdiocese of the Catholic Church, which asked the Don Bosco Worker Center if it would build a chair for Pope Francis to use while presiding over Mass in New York City.

The Don Bosco workers asked CWA Local 1103 if it could provide logistical support for their project, and the executive board offered to build the chair on the local’s property. The local quickly converted the garage into an impromptu workshop for the next three weeks.

The chair is very simple in its design and construction because, as workers were told, the pope did not want it to look like a chair built for royalty. Instead, he wanted one built for the people.

“We’re so grateful to Pope Francis for the support he gives the workers and his desire that workers be treated fairly,” said Theressa Kwiecinski of CWA Local 1103.

On Sept. 2, the completed chair was delivered to Madison Square Garden.

"A chair is very important in Catholic imagination. A chair represents unity and a chair represents teaching authority. The man who occupies the chair of St. Peter is our Holy Father the Pope, the Bishop of Rome. So wherever he goes, you want to have an important chair," said Cardinal Timothy Dolan, unveiling the finished chair.

Check out our video of low-wage workers and Verizon workers building the chair. 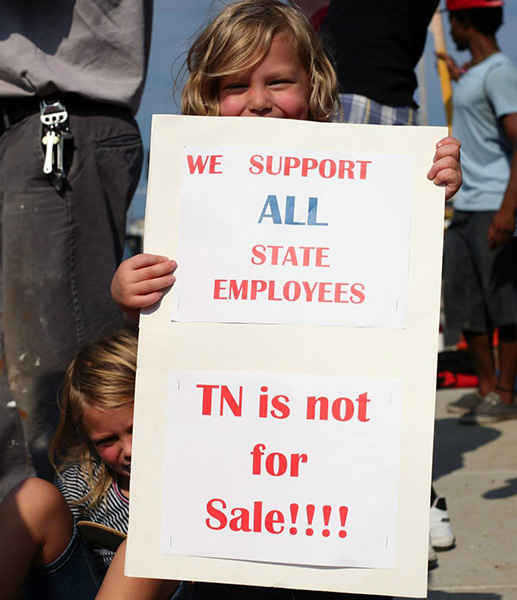 Members of UCW-CWA Local 3865 and their families are fighting for their jobs and to maintain quality services for Tennesseans while mobilizing citizens to stop a scheme by the governor to privatize and outsource their jobs. 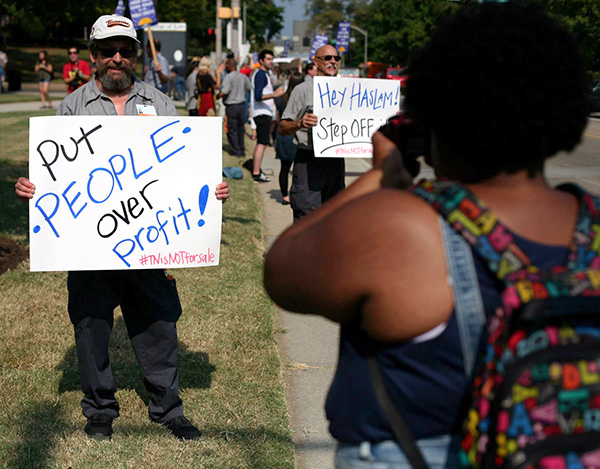 CWA members at University of Tennessee's 16 campuses are holding solidarity and public information actions across the state to protest Gov. Bill Haslam’s scheme to privatize tens of thousands of jobs and jeopardize public service in every county in the state. "Tennessee is not for Sale," CWAers are telling Haslam.

“Tennessee already leads the nation in the percentage of jobs that pay minimum wage," UCW-CWA Local 3865 President Diana Moyer said. "The massive scale of Haslam's privatization plan could have devastating consequences for the quality of public services in the state of Tennessee."

Some 1,500 CWA Local 3865 members work at the university's 16 campuses. Haslam wants to outsource all building and facilities services in all state buildings, including the University of Tennessee and TN Board of Regents systems. Thousands of jobs in every county and on every campus are at stake, along with jobs in hospitals, prisons, parks and recreation, and military facilities. The proposal would cover every range of jobs, from clerical and management staff to electricians and skilled workers to custodians and groundskeepers.

Local 3865, along with community and interfaith groups across the state, is collecting signatures in a petition against Haslam's scheme and they plan a week of action at the end of October. Learn more about the campaign on Facebook here.

“We have succeeded in communicating to Tennesseans that instead of savings and efficiency, privatization usually leads to hidden costs, loss of transparency, and poor working conditions. The progress we have made in turning public opinion against the Governor's outsourcing plan is testimony to the power of union solidarity,” Moyer said.

We Belong Together, 100 Women, 100 Mile Pilgrimage to the Pope

A group of 100 women have been walking toward Washington, D.C., since Tuesday, Sept. 15 on a 100-mile pilgrimage that they hope will encourage Pope Francis to put fixing our broken immigration system at the center of his discussions with public officials in Washington, DC this week.

Union women have been joining and supporting the marchers along the way since the pilgrimage began at a York County, PA detention center. The Maryland AFL-CIO held a community event in Baltimore last Saturday, and more union women were on hand as the marchers arrived in Washington, DC on September 22, including AFL-CIO Secretary-Treasurer Liz Shuler and UNITE HERE Vice President Maria Elena Durazo, who addressed the marchers’ closing vigil. CWA Education Representative Melissa Matos led a delegation of CWAers, including members of Casa De Maryland, to the event.

They marched because women in communities across the country are affected by U.S. immigration policies that undermine their families’ wellbeing. Because of the broken immigration system, many women are vulnerable to economic exploitation and struggle to survive. They often endure wage theft, sexual harassment, and injury on the job. Our entire workforce suffers when we allow standards to erode as millions of workers struggle to support their families without the status to assert their rights.

CWA’s membership poll of Presidential candidates is open at www.cwavotes.org. This is where you’ll find information about all the declared candidates, along with an online poll for members to make their views known.

The poll will stay open into early December and will help determine whether a single candidate has overwhelming support from the membership. It is important that this poll reflect the views of as many members as possible, so make sure your co-workers know about the site.

The information also will be provided to members in the Fall issue of the CWA News, which members will receive in early October.