Fifty years after passage of the Voting Rights Act, Americans who are fighting for the crucial right to vote are again coming to Washington in a "Journey for Justice" to fight to restore that right.

CWA District 6 Vice President Claude Cummings, NAACP President Cornell Brooks and former CWA President Larry Cohen, who heads the Democracy Initiative, marched together into Raleigh, N.C., as part of the Journey for Justice. The march, which began on August 1 in Selma, AL, will end in Washington, D.C., on Sept. 16 with a rally and Advocacy Day.

In Raleigh, the crowd rallied at the state Capitol. "The union movement and the civil rights movement have a long history and a solid partnership that today is growing even stronger," Cummings said. "That's how we will begin to restore justice and democracy and move closer to achieving social justice for all."

"We march because it is right for the people to vote," Brooks told the crowd. "We march because our people shed blood, sweat and tears for the right to vote." See the marchers and speakers here.

The Supreme Court of the United States wrecked the Voting Rights Act in its 2013 Shelby County v. Holder ruling that freed nine mostly Southern states – including Mississippi, Alabama, Georgia, North Carolina, South Carolina, and Texas – from having changes to their election laws pre-cleared by the U.S. Justice Department. Legislatures in many of those states, as well as Ohio, Wisconsin and others, immediately passed laws that placed significant barriers to voting by people of color, the elderly and young people. The barriers included, but are not limited to, requiring voters to produce government-issued photo identification but making it exceedingly difficult to obtain the identification.

North Carolina had one of the worst Voter ID requirements, which is currently being fought in the courts. The Voting Rights Advancement Act will return those states back to the jurisdiction of the Justice Department as well as add new states that have since acted to place barriers in the path of people seeking to vote.

"America's Journey for Justice" has featured teach-ins in almost 40 locations between Selma, AL, and Washington, D.C., including one last week organized by CWA with the North Carolina Chapter of the NAACP that took place in a Raleigh, NC, church that was attended by more than 160 people. 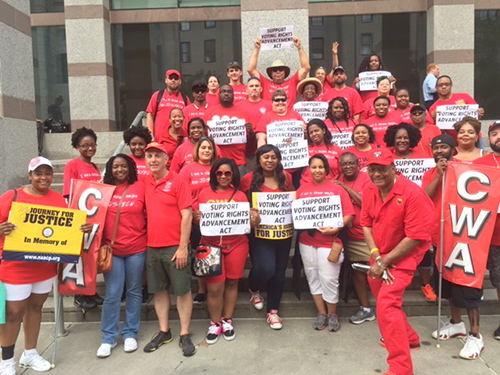 In a new op-ed in The American Prospect, CWA President Chris Shelton calls on labor and progressive leaders to join in expanding the Working Families Party across the country.

It's not news that the Republican Party has lunged far to the right, and is now fully controlled by the robber barons of the financial elite. The Republican presidential primary has become a terrifying contest of who can exhibit greater cruelty toward working people, immigrants, women, and people of color. Donald Trump has risen to the top of the Republican polls by seeming to almost drip with contempt for anyone who isn't a millionaire.

But the Democratic Party is conflicted. Many of our best champions run as Democrats, but the Democratic Party as a whole is also distressingly dependent on funding from corporate elites and Wall Street. Wisconsin Governor Scott Walker is just one of several Republicans who have built their careers by eviscerating workers' rights. How many Democrats have proposed dramatically expanding them? When Democrats are in control, they slow the pain, but they don't reverse the trend.

So yes, a new party. A Working Families Party.

Solidarity for AT&T Southeast Workers Fighting for a Fair Contract

CWA members at AT&T Southeast are holding informational pickets and stepping up mobilization to make sure the company knows they're determined to reach a fair contract. 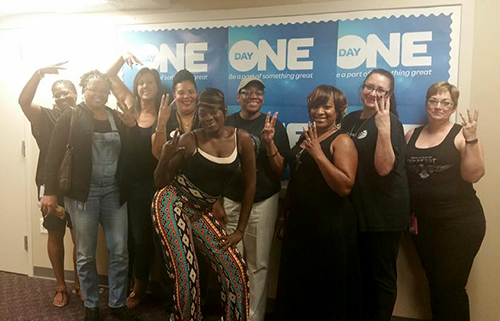 Members of CWA Local 3201 are wearing black for Black Friday. Members are mobilizing at the National Consumer Center office in Albany, GA.

CWA members are standing up to Verizon. 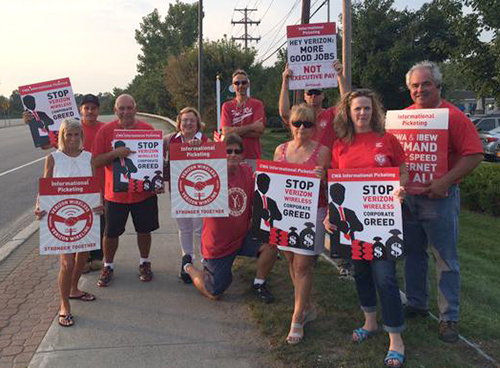 CWA Local 1120 members hold an informational picket on Route 9 in Fishkill, NY, in their fight for a fair contract. 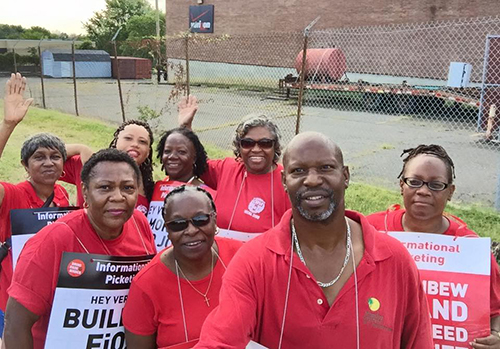 Verizon Members, Sign Up for the Sept. 15 Town Hall Call

Next Tuesday's telephone town hall call will focus on updates on Verizon East bargaining and how members are making a big difference through mobilization. To register, click here or text VZCALL to 49484.

Will T-Mobile Workers Finally Get Neutrality in Organizing Campaigns?

For years, CWA has called on T-Mobile to adopt a management neutrality agreement, in which the company agrees not to interfere in workers' choice about union representation. Deutsche Telekom, T-Mobile's German parent company, continues to assert that such a neutrality agreement would violate U.S. law.

Not so, said Perez, who wrote a letter to German Labor and Social Affairs Minister Andrea Nahles last week to clear up any confusion. "These sorts of voluntary recognition agreements – including terms that provide ground rules for organizing – promote peaceful labor relations and employee free choice. These agreements have been held to be lawful and have been enforced by the National Labor Relations Board and the courts," he wrote.

Maybe now Deutsche Telekom finally will get the message and end its campaign of unlawful firings, intimidation, harassment and surveillance of workers who want a union voice.

AFA-CWA International President Sara Nelson and the AFA-CWA Executive Board held a wreath-laying ceremony at the National 9/11 Pentagon Memorial this week. CWA Secretary-Treasurer Sara Steffens joined the solemn remembrance of the AFA-CWA Flight Attendants and colleagues who acted with courage and determination 14 years ago on Sept. 11, 2001. 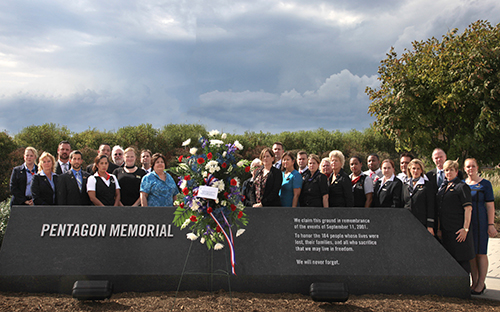 AFA-CWA Executive Board members read the names of the Flight Attendant-First Responders, Pilots and Customer Service Representatives who were on those fateful flights.

"We will never forget our heroes and we will always seek to honor their sacrifice with our actions," Nelson said.

The Federal Communications Commission (FCC) has granted approval to Frontier Communications to go through with its acquisition of Verizon's local wireline, broadband and video operations in California, Florida and Texas.

The FCC will not impose conditions on the sale because, the agency said, the transfer of ownership is "likely to result in public interest benefits of increased investment in the local networks facilities and broadband services." Prior to the FCC's approval, Frontier committed to bring high-speed Internet at 25/2 Mbps speeds to 750,000 additional households over the next five years. Over the last five years, the company increased broadband access for 85 percent of the households in its then newly-acquired property areas.

Before the sale was approved, Frontier reached agreements with CWA in California and Texas. The company agreed to extend current collective bargaining agreements, add more than 200 new union jobs in California, Texas and Missouri, and has committed to employ a 100 percent U.S.-based workforce.

The California Public Utilities Commission is continuing its review of the transaction with a decision expected before the end of this year.

CWA and several other unions have petitioned the U.S. Supreme Court to review the New Jersey Supreme Court's ruling that upheld more than $1.5 billion in state pension cuts made by Gov. Chris Christie.

In June, the New Jersey Supreme Court said that the 2011 pension law, which increased workers' pension contributions in exchange for a commitment for state contributions into the system, "does not create a legally enforceable contract that is entitled to constitutional protection." CWA and other unions argued that Christie broke that 2011 law when he made additional pension cuts; one of the dissenting judges agreed that public workers have "protectable contractual rights under the United States Constitution."

At a Boston Labor Day celebration, President Obama announced his signing of an executive order that gives 300,000 contracted Federal employees the ability to earn up to seven days of paid sick leave annually.

The President spoke about how unions helped build the American middle class and paid tribute to collective action by workers.

"I've said it before and I'll say it again – if I were looking for a good job that lets me build some security for my family, I'd join a union," the president said to applause from the audience. "If I wanted somebody who had my back, I'd join a union.

A video of the speech is available here.

A transcript of the speech is available here.

In Pensacola, Fla., members of CWA Local 3109 held an unfair labor practice strike on Aug. 28, following illegal threats made by management to a union member. A manager told a CWA member that if he sought union representation for a performance warning, he would suffer more serious consequences and a longer period of disciplinary action. 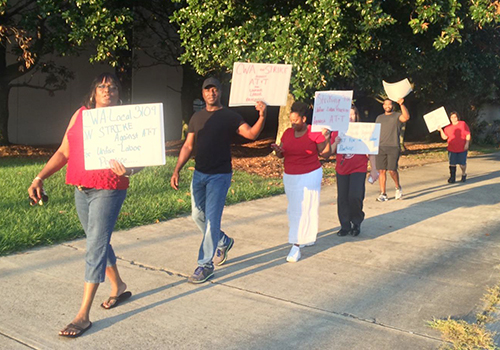 This clear cut violation of the National Labor Relations Act (NLRA) was successfully resolved with the manager rescinding his warning altogether and writing a letter of apology to the member and the local.

The Coalition of Labor Union Women will be holding its 18th Biennial Convention from November 18-21 at the Sacramento Convention Center. All convention information can be found by clicking here and any union member who joins CLUW by October 5 can become a convention delegate with full voting privileges. 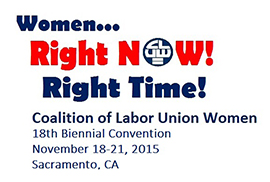 Do you want women finally to receive equal pay to their male counterparts? Do you want to raise the minimum wage for those women who are working but still live in poverty? Do you want to reinforce the right of women to make their own health care and family planning choices free from outside interference? Do you want to be a part of the impact that women will have on the 2016 election? Do you want women to have a voice at work? Hundreds of union activists, including CLUW President Connie Leak, will converge on Sacramento to tackle these and many other issues.

Don't miss out on all convention information, which can be found on CLUW's convention page, including the exceptional speakers, stimulating panels and over 21 workshops.