Details of the industry-leading tentative settlement are being provided to members. Read more here. A series of contract explanation meetings will be held prior to the contract ratification vote.

Ron Collins, CWA chief of staff and CWA/IBT Association bargaining chair, said the bargaining team did tremendous work over the past 10 months to gain the industry-leading contract that American agents deserve. "The mobilization of our members really made the difference, and especially in the past few days, showed the power of our unity."

In September 2014, by an 86 percent vote, airport and reservations agents at American – formed by the merger of American Airlines and US Airways – overwhelmingly chose representation by the Communications Workers of America/Teamsters Association.

Ben Belty, who works at the Louisville International Airport, just wants to vote.

They and 30 coworkers representing over 5,300 employees of Envoy – known until recently as American Eagle – came to the nation's capital yesterday to ask members of Congress to contact the National Mediation Board on their behalf to let them vote to join CWA.

"The NMB is dragging its feet about letting us vote for a union," Dandridge said. "We have done all our work, collected our signatures, more than 60% of us signed cards, and we turned them in but the NMB is holding us back."

35 agents representing over 5,300 employees of Envoy, which provides ground services for carriers at 110 airports around the country, meet at CWA before heading to Capitol Hill to ask their members of Congress to contact the National Mediation Board to "let us vote."

The workers have waited since turning in the cards on May 11 while an NMB investigator tried to decide who is eligible to participate in the election. The investigator wrongly disqualified more than half of the workers from being eligible to vote. But, as the full NMB board considers their appeal, time is running out. Every day of delay causes more agents to grow discouraged and quit, hopeless that things will improve any time soon.

Mervin Douglas of Miami International Airport says he's nearing the end of his rope. Struggling to pay his bills on his income, despite working as much as 60 hours per week at about $10/hour and wracked by injuries on the job, he believes getting a union could begin to correct some of the issues they are facing on the job.

"You know you're trying to do something. Injuries are slowing you down. You're not making enough money to take care of yourself and raise a family. If there's no union, what should I do, where should I turn? What choice do I have? I really don't have a choice. I have to go find something else," Douglas said.

In the last week, workers quickly gathered more than 1,200 signatures of coworkers on a petition demanding an end to the waiting and for the election. They brought the petition to Congress yesterday asking their elected representatives to contact the NMB and urge them to move ahead with a decision on their case in an expedited manner. 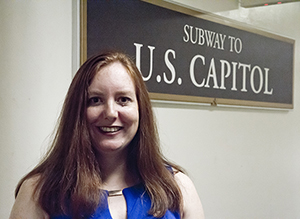 Shannon Kitchen loves her job as an Envoy station agent at a Beaumont, TX, airport but would very much like to make it a better job by making it a union job.

Before going to the Hill, CWA President Chris Shelton, joined by CWA Secretary-Treasurer Sara Steffens and AFA-CWA President Sara Nelson, welcomed the workers to Washington and assured them the union is standing behind them in their struggles.

"What you're doing today is probably one of the most important things you've ever done to form a union," Shelton said. "If we convince members of Congress to act, we can bring the pressure that we need on the NMB. Then maybe the NMB will do what they have to do."

"Everyone else at American Airlines has a voice through a union," Shannon Kitchen said. "We just want the opportunity to vote on a union."

CWA members from the Atlanta area, the Atlanta #StopTPP Coalition and many environmental, faith, senior citizen and LGBT activists protested today at the trade ministerial meeting in Atlanta, GA, where negotiators are pushing for a deal on the Trans-Pacific Partnership.

Outside the secret negotiations, protestors carried signs and banners calling TPP a bad deal for workers, communities and the environment.

Martin O'Hanlon, Director of CWA-SCA Canada, who spoke outside the negotiations, also addressed scores of protesters at a rally hosted by the Atlanta #StopTPP Coalition at the International Peace Fountain in Atlanta's Woodruff Park. With O’Hanlon was former Japanese Agricultural Minister Yamada Masahiko, who led a Japanese anti-TPP delegation to Atlanta. 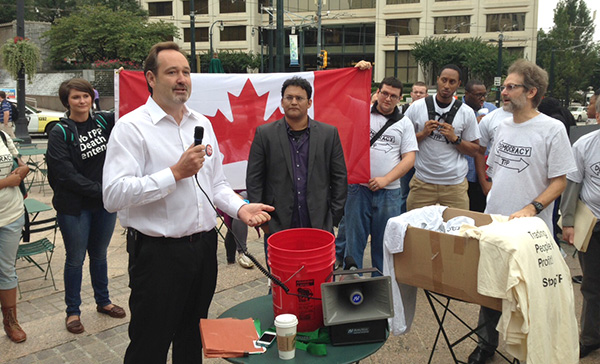 Martin O'Hanlon, Director of CWA-SCA Canada, addressed scores of protesters at a rally hosted by the Atlanta #StopTPP Coalition.

"The corporations are here for profit, we're here for democracy!" O'Hanlon said. "The TPP is being negotiated in secret with input from multinational corporations, but nothing from labor leaders, environmentalists and other experts. Even our politicians don't know what’s in it...And 'We The People' won't even get to see the final text – it will remain secret for years. What kind of democracy is that?"

We are seeing more and more demonstrations and outrage in countries like Canada and Japan.

Big differences still remain among TPP negotiators on other issues too, auto parts and content requirements, allowable levels of dairy imports, and the ability of multinational corporations to challenge a country's laws or regulations, among others. 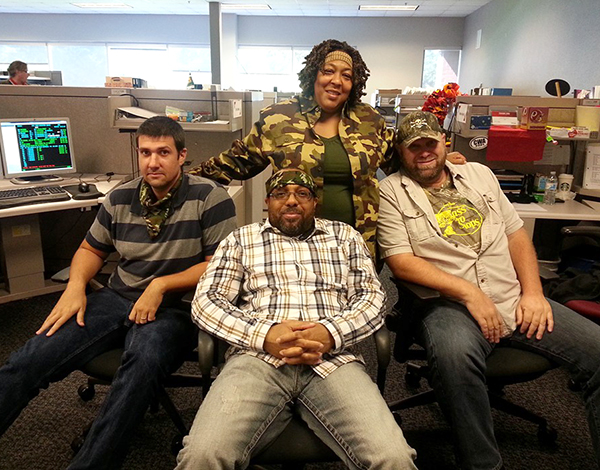 CWA Local 2201 members at Verizon are dressed for Militant Monday, telling their employer they won't back down in their fight for a good contract. 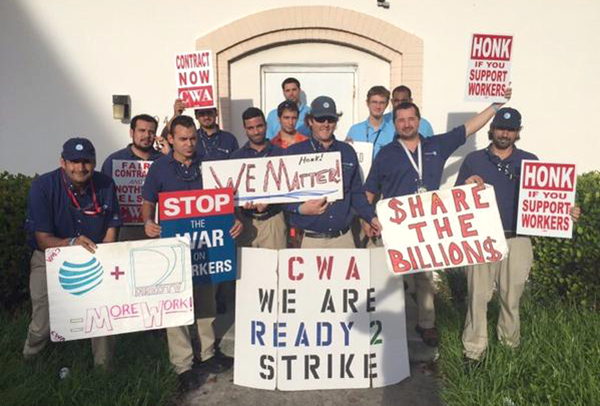 CWA Local 3122 members at AT&T are wearing blue on Mondays to let the company know workers are "Singin' the Blues" because they're working without a contract.

Several months ago, the store's management began unilaterally enforcing its attendance policy more aggressively and stringently. As a result, many of the workers unfairly faced discipline for alleged lateness or absences. Three employees had so many strikes against them that they were very close to being terminated. 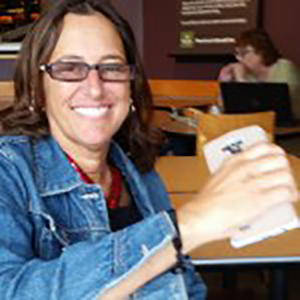 Heidi Thomson, an employee at the store and member of CWA Local 1400, said CWA saved her job at the Verizon Wireless store in Everett, MA.

CWA filed an unfair labor practice charge with the National Labor Relations Board, and the company recently settled. Verizon Wireless removed all disciplines and reset everyone's attendance record, so that all workers now have zero tardies and absences.

"CWA just saved my job," said Heidi Thomson, an employee at the store and member of CWA Local 1400.

As part of the settlement, the company admitted no illegal wrongdoing. Though for some reason they did find it necessary to undo everything they had done.

Talking About the Union Difference

President Obama believes we must empower more workers with a voice on the job. That's why the White House will be hosting a summit next Wednesday on the importance and value of collective bargaining.

"We have an opportunity, as our recovery continues, to emerge even stronger than before the Great Recession," wrote Labor Secretary Tom Perez in a blog post announcing the summit. "But we can only do that if we make sure that everyone is contributing to economic growth and sharing in it. The Summit on Worker Voice will energize a new generation of Americans to come together and recognize the potential power of their voice at work."

TU activists at T-Mobile's call center in Wichita, Kan., are standing with their German brothers and sisters at Deutsche Telekom. 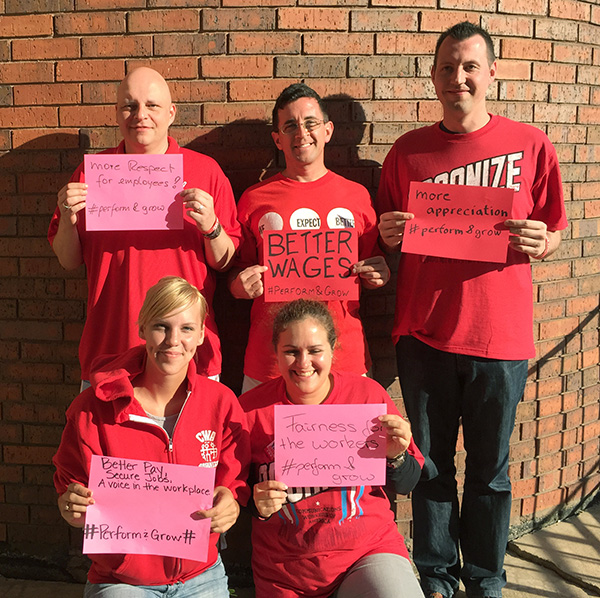 As our German friends working at Deutsche Telekom observe Guiding Principles Day – celebrating being the "Best Place to Perform and Grow" – U.S. workers at T-Mobile illustrate what they need to improve their workplace. 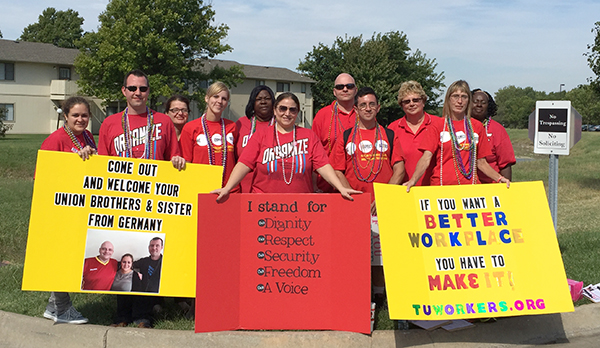