CWA Statement on Release of the Trans-Pacific Partnership Texts

The following is a statement by CWA President Chris Shelton on the public release of the Trans-Pacific Partnership texts:

With the release of the Trans-Pacific Partnership texts, it's finally time to learn whether the TPP is, in fact, nothing more than the latest in a long line of trade agreements negotiated by and for the 1 percent.

The Communications Workers of America, like many others, is reviewing the texts. But based on what we've already seen and learned about this deal, we're not likely to change our position that this TPP is a disaster for working families and communities.

Even a cursory review demonstrates how this trade deal fails working families. It forces U.S. workers to compete with the 65-cent an hour wages of Vietnamese workers and the slave labor employed in Malaysia. It allows multinational corporations to challenge environmental, financial, consumer and other regulations through international tribunals – and outside the court systems of member countries. It pays lip service to addressing real concerns about currency manipulation that costs American jobs and leads to more jobs being sent offshore. And it allies the U.S. with countries that abuse their own citizens, including Brunei, Vietnam and Malaysia.

For nearly six years, from the start of negotiations that were kept secret from the public but gave full access to 600 corporate lobbyists, we've known who will benefit from the TPP.

CWA and a broad coalition of environmental, consumer, faith, immigrant rights, student and many other groups will continue to organize and mobilize against this deal and to hold accountable members of Congress who have chosen to side with the 1 percent. 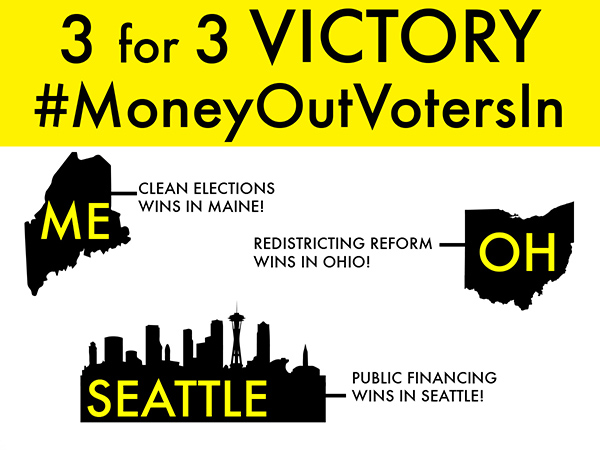 This Election Day, Victories for 'Government Of, By and For the People'

Across the country on Election Day, voters took a stand for accountability, fairness and voter access in our political process.

CWA and other partners in the 50-organization Democracy Initiative, are committed to restoring government "of, by and for the people," not one bought and paid for by ultra-wealthy special interests, said CWA President Chris Shelton.

Voters approved Question 1, strengthening the state's landmark Clean Elections system and small-dollar public financing of campaigns and making candidates more accountable to the voters, by requiring that outside groups disclose their top three donors on all political ads. In Maine, members of CWA Local 1400 joined Mainers for Accountable Elections and Maine Citizens for Clean Elections in building a grassroots campaign that publicized the issue and got people out to vote.

"Maine voters took a stand for democracy, making their state the first since the Supreme Court's flawed Citizens United decision to begin to restore accountability and transparency in the election process," CWA District 1 Vice President Dennis Trainor said. "This is great news for working families and great news for our democracy. Members of CWA Local 1400 joined with good government activists to make it happen, and we know we are gaining ground in the fight to restore our democracy." 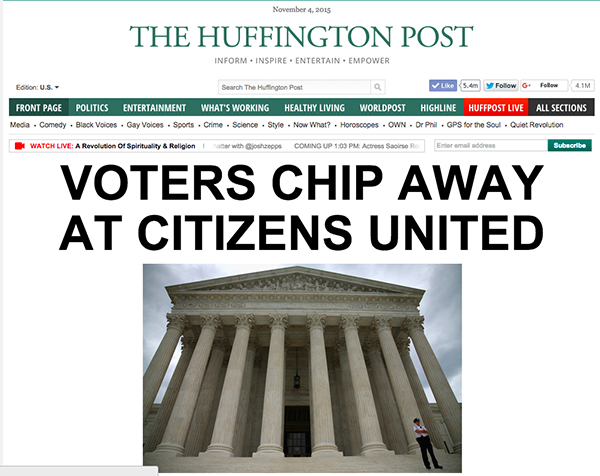 In a huge victory for fair elections, Democrats won three seats on the Pennsylvania Supreme Court, giving Democrats a 5-2 majority for at least a decade.

This matters because the Supreme Court chooses the tie-breaking vote for the state's redistricting commission and will be critical following the next U.S. census in 2020. Since 2011, Republicans have controlled the process and pushed through unfair district maps.

"CWA and our allies worked hard to elect three Democratic judges to the State Supreme Court," CWA District 2-13 Vice President Ed Mooney said. "Not only do these judges oversee telecommunications regulation and other issues, but they are the line in the sand against gerrymandering."

In 2012, Republicans won control of the state legislature despite losing the state's popular vote by a 52-47 percent vote, because they had controlled the drawing of district maps. In 2014, although Democrats won 44 percent of the votes in the 2014 midterm elections, they got just five – or 27 percent – of the state's 18 seats in the U.S. House of Representatives.

Ohio: A New Dawn for Democracy

Fourth time's the charm in Ohio, where voters overwhelmingly approved an amendment to the state constitution to scrap the old way of drawing boundaries for General Assembly districts.

An overwhelming 72 percent of voters created a new, bipartisan commission to draw legislative districts that are compact and do not favor one political party or another. The amendment takes effect in 2021 when the next round of redistricting will occur.

Supporters of both parties said the measure will make the redistricting process more bipartisan, transparent, and fair.

In Seattle, in a big vote, voters created a first-in-the-nation system that will democratize city elections by giving every voter a chance to invest in political campaigns. The initiative also limits contributions for city contractors, closes the revolving door, and increases transparency and accountability.

"Seattle voters were committed to ensuring and expanding opportunity for everyday Americans to participate in their city's political process. This public financing of all elections brings us another step closer," said District 7 Vice President Brenda Roberts.

On Election Day this week, CWA activists – like Local 1037 members in this photo – worked hard to get out the vote for worker-friendly progressive candidates. There was much at stake for unions and workers in elections across the nation. Some CWA members even ran for offices:

CWA Local 1104 Political Coordinator Anthony Eramo won re-election to the City Council in Long Beach, NY. A long-time supporter of the Working Families Party, Eramo has served on the City Council since 2014. 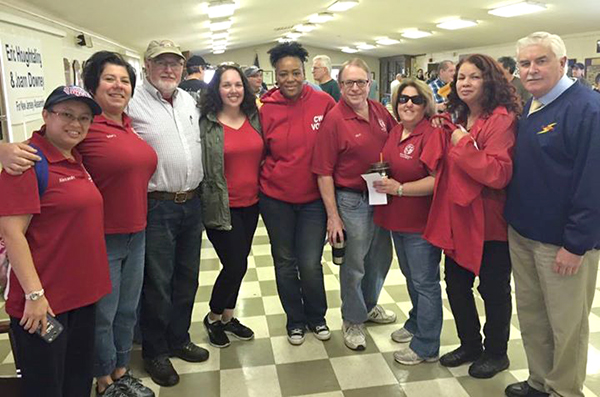 Voters elected CWA Local 1037 member and Next Gen activist Victoria Fisher to the Teaneck Board of Education. Fisher was the second-highest vote-getter in an election in which she bested an incumbent.

Follow up on these victories for getting "money out and voters in" our democracy by signing this petition calling on President Obama to issue an executive order that would require businesses and contractors that get federal money to disclose their political spending.

Activists from CWA and a big coalition of organizations are calling on the President to take a stand against the Supreme Court's Citizens United decision by signing the order. Signatures will be delivered to the White House.

Ballots and voting information will be mailed out on Nov. 6 to all American Airlines agents by BallotPoint, the independent third party conducting the ratification vote on the tentative agreement. The Internet and telephone vote will continue through Nov. 30, and results will be tabulated and announced on Dec. 1.

Agents are attending contract explanation meetings and checking out this video that answers questions about the TA. More videos and information are available here.

Verizon keeps crying poverty in contract negotiations, so CWAers have responded with a mock "Go Fund Verizon" campaign, with a tongue-in-cheek effort to solicit donations to help out the "struggling" company.

CWAers in New York, New Jersey, Pennsylvania and Maryland, including members of Locals 2108 and 2336, are distributing mock "GoFundMe" flyers, calling attention to the company's multi-billion-dollar profits and its refusal to bargain a fair contract for 39,000 workers. 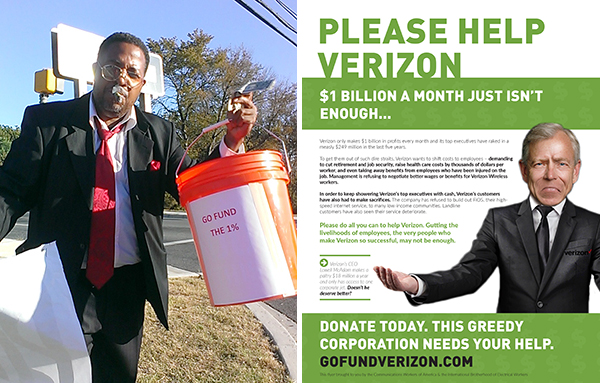 IUE-CWA has filed a complaint in federal bankruptcy court charging General Motors with shortchanging more than 5,000 pre-age 65 retirees on their retiree medical coverage. The complaint was filed in the Southern District of New York Federal Bankruptcy Court before Judge Robert Gerber. Gerber is the same judge who approved the 2009 landmark settlement between IUE-CWA and GM that established a health insurance plan for pre-age 65 retirees from GM and Delphi.

IUE-CWA President Jim Clark said, "IUE-CWA participants, as well as participants from other unions, are not getting the full benefit of the bargained agreement that GM reached with us in 2009. We are calling for GM to do the right thing now by holding off on their announced January 1, 2016, benefit reductions until this dispute is resolved."

IUE-CWA represents more than 10,000 active workers at GM and Delphi.

The 2009 settlement called for GM to set aside $467 million to deliver benefits to plan participants. GM, however, is failing to spend these dollars and in fact this year has left $95 million unspent while increasing costs to this group of retirees and imposing higher premiums, deductibles and out-of-pocket costs that should be necessary were GM meeting its full spending obligations under the agreement.

Why Are We Rewarding Wall Street  –  Again? 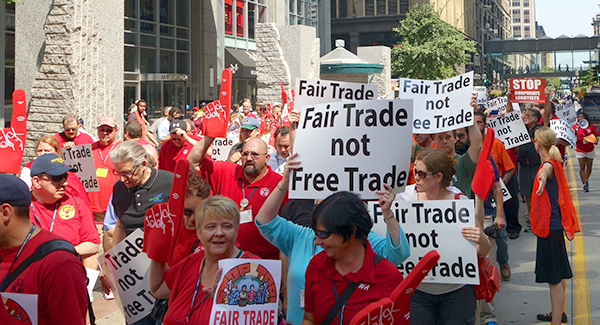 Labor, fair trade, environmental and community activists marching in a protest against the TPP.

Its lobbyists have creeped into negotiations for both the Trans-Pacific Partnership (TPP) and Transatlantic Trade and Investment Partnership (TTIP). And they're writing language into the agreements that would give big banks new powers to sue national governments and sidestep Dodd-Frank regulation.

"As working families slowly recover from lost jobs and slashed wages of the Great Recession, bankers are being rewarded yet again with the ability to challenge common-sense Wall Street regulations that were supposed to protect the Americans from future crises," CWA President Chris Shelton blogs on Medium.

The Town Board in Amherst, NY, passed a resolution on Monday to support the Safe Staffing for Quality Care Act which would establish minimum staffing ratios for certain types of hospital units and nursing homes, based on patient needs. 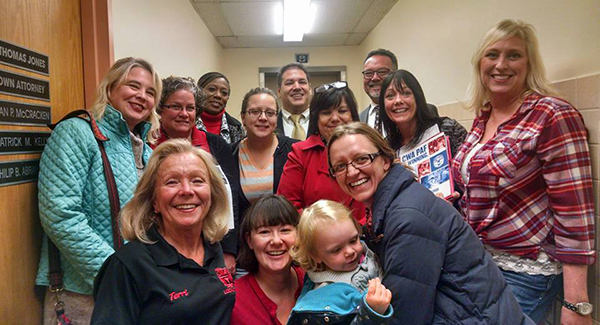 CWA Locals 1168 and 1133 and the New York State Nurses Association have been working hard to lobby for the legislation which would help ensure that patients receive the quality care that they deserve.

Western New York is seeing a surge in support of safe staffing legislation. In addition to Amherst, several cities and counties are proposing resolutions supporting safe staffing legislation. On November 9 at St. Joseph's Hospital in Buffalo, CWAers will take action to make sure we're heard loud and clear. We will take a chain of over one thousand Staffing/Protest of Assignment forms and surround the hospital to drive home the fact that "Bedside Knows Best." Click here for more information.