Nearly 5,000 Envoy Air agents joined together and voted overwhelmingly for CWA representation in an election conducted by the National Mediation Board. 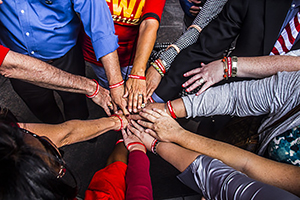 The agents work at 102 stations nationwide and have a broad range of responsibilities for passenger service and fleet service work. Envoy is owned by American Airlines Group.

"This means everything to me," said Aushya Hoover of Rochester, New York. "We work right next to mainline airlines and they implement different rules for us. We're treated unequally and unfairly. Now that we have a union, we can finally get some parity." 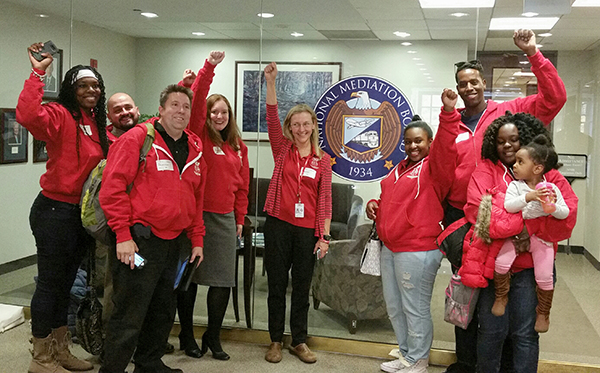 Envoy agents celebrate their union after the vote count at the National Mediation Board in Wash., DC.

"I think it's great that Envoy agents have voted to be part of CWA," said Chris Kress, an American Airlines passenger service agent at Dallas-Fort Worth. "We can't let the company pit us against each other and against even lower paid contractors who are not employees. Now all agents at the New American Airlines – Legacy AA, Legacy USAirways, Piedmont and Envoy – are part of the CWA family. Like our red wrist bands say – we are stronger together. It takes all of us standing together to improve our wages and working conditions."

Envoy agents have been mobilizing for the right to union representation and to negotiate for fair wages and to improve their jobs. Without a union voice, agents had little or no job security and no say about their wages, as their work is often outsourced to a lower bidder. Their jobs are stressful and demanding, with agents cross-trained and cross-utilized to carry out a number of different jobs.

In a letter sent Nov. 23, they asked German Chancellor Angela Merkel to urge the German government to exert its influence on Deutsche Telekom – T-Mobile's German parent company – to enact meaningful reforms. The German government owns 30 percent of Deutsche Telekom. The signers expressed concern that T-Mobile hasn't yet changed a company-wide policy, which has been found to unlawfully silence employees by requiring them to sign non-disclosure agreements. Under T-Mobile's policy, employees who make a complaint about sexual harassment or other workplace violation are prohibited from talking about the issue, even with other employees. Those who refuse to sign risk losing their jobs.

"We are twenty-five congresswomen who do not tolerate sexual harassment in the workplace and we believe Chancellor Merkel won't tolerate it either. American workers deserve to be protected in the workplace and we urge Deutsche Telekom to ensure the highest standards, not the lowest," said Rep. Betty McCollum (D-MN), who led the offort. "Chancellor Merkel must ensure that her government is not profiting from this unacceptable treatment of working American women or undermining their rights as workers."

The letter has CWA's full support.

"T-Mobile US workers greatly appreciate the efforts of Rep. Betty McCollum and her House colleagues to raise awareness about the mistreatment of women workers and other violations of workers' rights in their workplaces," said Sandy Rusher, CWA's organizing director. "There is no place in the U.S. or any other nation for a company that tries to restrict employees from talking about issues on the job, especially those as dire as sexual harassment."

Activists Have a Holiday Greeting for Verizon on Black Friday

This Friday, when shoppers head to the stores, CWA members and supporters throughout Verizon territory will be leafleting and caroling outside Verizon Wireless stores. Activists want to deliver a holiday message to Verizon customers and the company about fairness and alert the public to the company's policies that hurt working families.

Verizon management is refusing to negotiate any raises, better benefits or better working conditions for newly-organized Verizon Wireless workers, while threatening and intimidating non-union wireless workers who want to stand up for their rights.

Verizon, in contract negotiations covering 39,000 CWA and IBEW members, continues to demand concessions and givebacks, despite earning profits of more than $1 billion a month.

Last week, CWAers held a Day of Action, with actions and rallies at more than 35 locations.

"We do not have a willing negotiating partner," CWA Local 1103 President Kevin Sheil told members in Poughkeepsie, NY. "The company's practicing the art of race-to-the-bottom bargaining. Verizon is literally making over a billion dollars a month in profits, and yet, they still want to destroy our families, our communities, our union, and our contract." 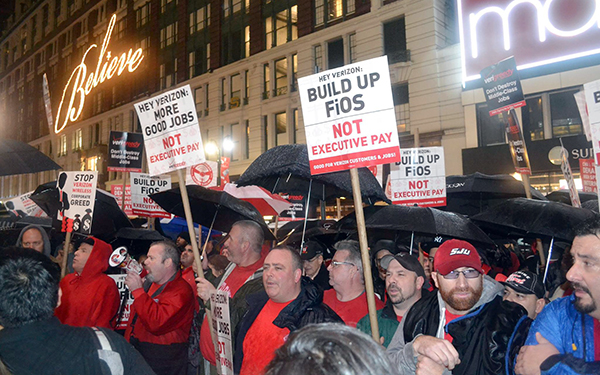 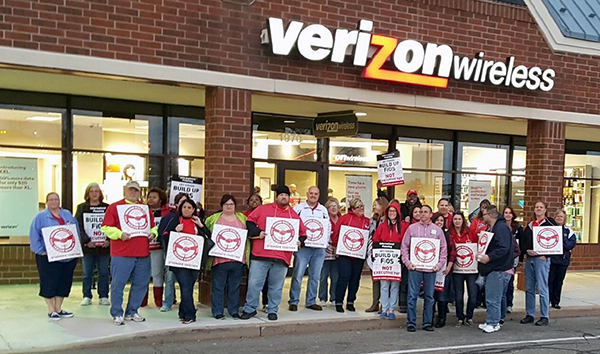 At a rally outside a Verizon Wireless store in Pittsburgh, PA, CWA Local 13500 members put Verizon on notice that wireline and wireless workers are standing together. 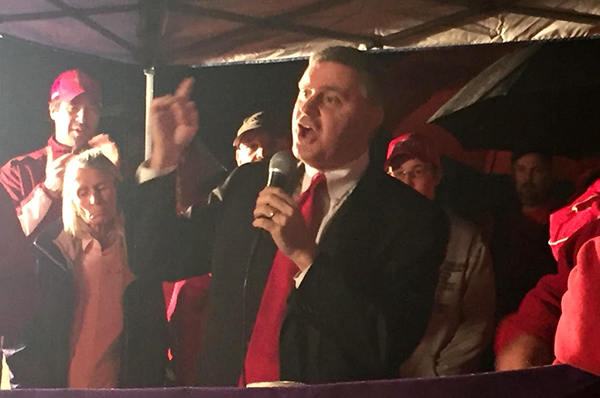 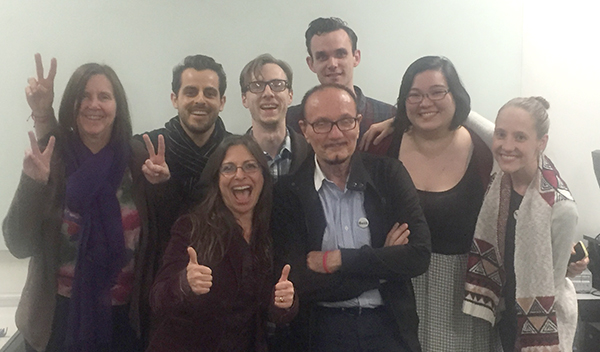 English language instructors at the EF International Language Center in Boston voted 19 to 8 last week to join the Boston Newspaper Guild (TNG-CWA Local 31245) in a National Labor Relations Board election. Key issues for the teachers were low wages and lack of job security.

Get Financial Predators Out of Banking

Join tens of thousands of activists and take a stand against the outrageous fees and practices of financial predators who are raking in $103 billion a year by targeting some of the most vulnerable Americans.

Nearly 28% of U.S. households are underserved or completely denied service by traditional banks and are forced to turn to payday lenders, check cashing operations and other shady operators. These families spend, on average, nearly 10 percent of their income on fees and services because these disreputable lenders charge triple digit interest rates and outrageous fees for basic financial services.

There is an alternative – postal banking. Under this system, used by many countries, the U.S. Postal Service would provide affordable, nonprofit, consumer-driven financial services ranging from paycheck cashing and bill payment to savings accounts and small dollar loans at its more than 30,000 branches.

Join the fight to give working people the access they need to affordable financial services and safe, affordable credit. For those without access to traditional banks as well as those looking for an alternative to the Big Banks, postal banking is a real solution that serves the public, not Wall Street.

CWA's contingent of 32 activists attending the Coalition of Labor Union Women convention in Sacramento was the largest of any labor group, and CWAers are determined to increase their numbers.

During the meeting, more than 500 CLUW participants made calls to the German Embassy, calling on the German government, a major owner of Deutsche Telekom and T-Mobile, to require the company to end its gag rule on workers, especially when it comes to serious violations like sexual harassment.

Here are some recommendations for a union-made holiday season. 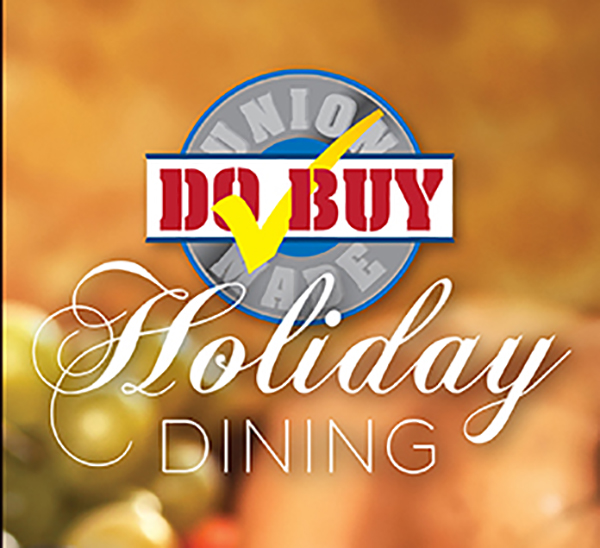 Best Wishes from CWA for a Safe and Happy Thanksgiving Holiday 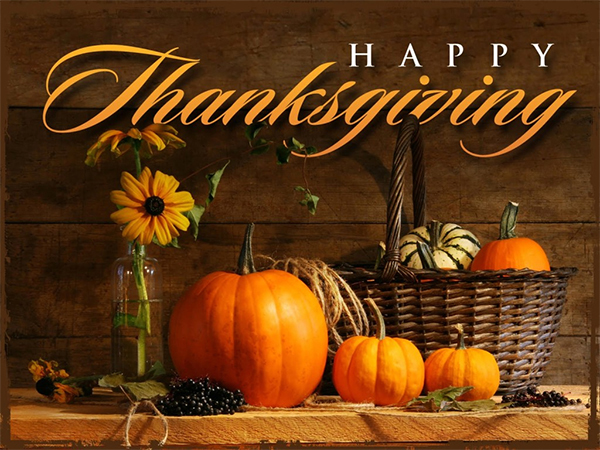