CWAers, Allies Unite Against TPP in Week of Action

There's still time to participate in this week of action and make your voice heard.

At StopFastTrack.com, activists can get information from a broad coalition of organizations determined to stop fast track and TPP.

More than 30 national organizations are participating in the Week of Action, sending email blasts to members, pushing out the "stop fast track" message on social media and joining in 19 separate on-the ground rallies.

CWA Local 9509 members protested outside the San Diego office of Rep. Susan Davis (D-CA), calling on her to stand up against fast track.

According to a recent Pew Research Center study, "some of the greatest public skepticism about trade and foreign investment is found in the United States." A growing coalition of small business, labor, environmental, social justice and good government groups – and voters of both parties – oppose fast track and TPP. 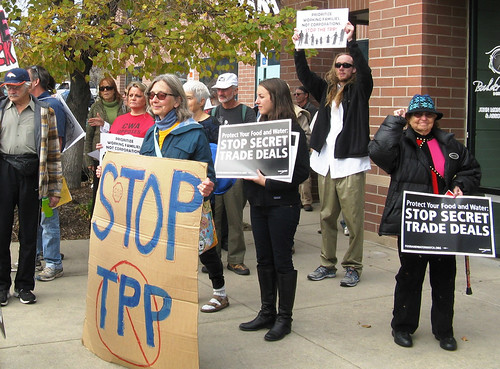 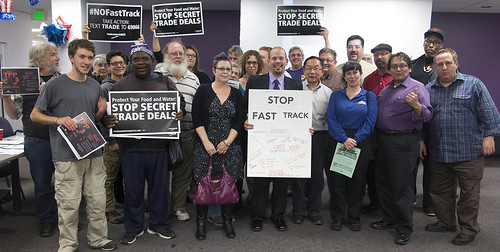 In Sacramento, CWAers and allies hold a community forum on TPP. 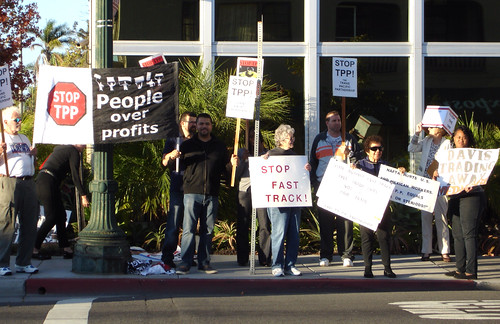 CWA Local 9509 members called on Rep. Susan Davis (D-CA) at her San Diego office to tell her to stand up against fast track. 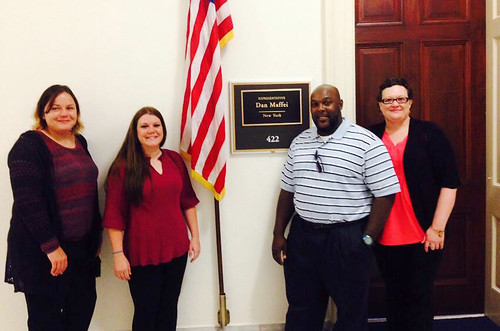 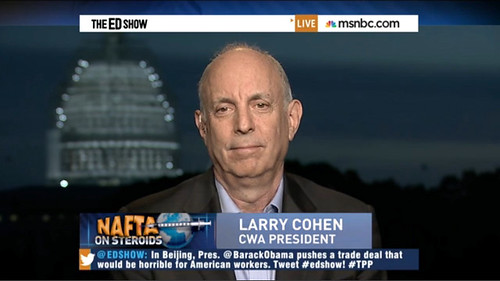 Cohen: Our Veterans Deserve Better Than a Trade Deal that Dishonors our Democracy

This week, we celebrated Veterans Day as our Executive Board met in Washington. We made sure to honor and recognize the service of so many CWA sisters and brothers, something that rightfully should be done not just on Veterans Day but every day, by ensuring that our veterans have the jobs, opportunities and services they need.

Washington, D.C., was focused on a huge concert on the mall. Our board members however, were focused on our ongoing campaign against the Trans-Pacific Partnership, a trade deal that has Vietnam as a leading "partner."

How can our nation honor our veterans, yet promote the worst trade deal we've seen yet, a deal that undoubtedly will result in jobs leaving the U.S., lower pay for U.S. workers with "tradeable" jobs, and huge gains for the Vietnamese government?

We will remember the service of so many. But we also can honor our veterans by fighting back against TPP during this week of action and in the months ahead. Vietnam has a minimum wage of 28 cents per hour, an average hourly wage of 75 cents and virtually no worker, consumer or environmental rights or protections.

When our veterans come home, we should greet them not only with parades and concerts, but with good jobs and benefits, not trade deals that dishonor our democracy and our rights and those of working families around the world.

So let's double down and do all we can to defeat TPP, for our veterans, and working families everywhere.

The National Labor Relations Board (NLRB) issued another sweeping federal complaint against Cablevision and its CEO James Dolan last Thursday for violations of federal labor law at its Brooklyn unit. Cablevision was charged with illegally firing Jerome Thompson, conducting an illegal sham poll of workers to determine if they wanted to leave their union and illegally implementing changes in working conditions without bargaining with CWA.

This complaint comes on top of charges that two separate NLRB regional offices authorized against the company in April 2013: One in Brooklyn for illegally firing 22 workers, bargaining in bad faith, and spying on workers, and another in the Bronx for illegally intimidating, harassing and essentially bribing workers during a union representation election. Briefs in that case were filed on Feb. 28, and an Administrative Law Judge's decision on those charges is expected soon. 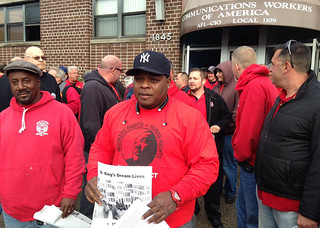 "The federal government has once again charged James Dolan and Cablevision with shamelessly breaking federal labor laws," said District 1 Vice President Chris Shelton. "This discriminatory and illegal treatment of hard-working men and women is unacceptable, and it's time for public officials to make clear to James Dolan that just because he's a billionaire, he doesn't get to supersede the law or trample on workers' rights. Brooklyn Cablevision workers deserve equal pay, the respect of having their federally-protected labor rights honored, and a fair contract."

Recently, 42 of the New York City Council's 51 members wrote to the Commissioner of New York City's Department of Information Technology and Telecommunication to express concerns that Cablevision may not meet city franchisee requirements because of the pending NLRB charges against the company.

CWA: Don't Give a Free Ride to a Handful of Companies at the Expense of All Broadband Users

CWA supports strong rules to protect an open Internet: no blocking, full transparency, and no unreasonable discrimination. These were the rules adopted by the Federal Communications Commission in 2010, and they have worked to promote free expression on the Internet and the virtuous circle of job-creating investment until successfully challenged in court by Verizon.

Jobs and investment matter. The focus of Internet policy must be grounded in the reality that building a truly high-speed Internet will take hundreds of billions of dollars. Policies that tilt the Internet economy in favor of companies like Google, Amazon, and Netflix that make billions of dollars in profits are shortsighted. Such policies won't create the incentives necessary for investment and will cost good-paying jobs that our nation can't afford to lose.

CWA believes that the strongest legal basis to protect an open Internet is to follow the road map provided by the D.C. Circuit Court of Appeals earlier this year based on Section 706. As an independent agency, the FCC should move forward with strong open Internet rules based on that road map.

A petition campaign organized by Steve Tisza, president of CWA Local 4250 and head of CWA Retired Members' Chapter 210, is mobilizing CWAers to fight back to safeguard retiree health care.

Be a part of the campaign and sign the petition here.

Remembering the Crew of United Flight 93 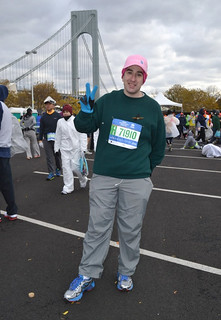 Nick Pino, a United Airlines Flight Attendant and AFA-CWA Local 21062 member, ran his first marathon to honor his colleagues, the heroes of United Flight 93, who perished in Pennsylvania on Sept. 11, 2001.

Nick Pino, a United Airlines Flight Attendant and member of AFA-CWA Local 21062, had never run a marathon. But when he was selected in a company lottery to run in the NYC Marathon, he jumped on the opportunity to run and honor his colleagues, the heroes of United Flight 93 who perished in Pennsylvania on Sept. 11, 2001.

Nick dedicated his training and race to those colleagues and raised funds for the Jason Dahl Scholarship fund; Dahl was the captain of United Flight 93.

AFA-CWA International President Sara Nelson said, "We're very proud of Nick for this personal memorial to our colleagues, and want to recognize his tremendous effort. We honor our friends and colleagues who lost their lives on Sept. 11 every day, through our work for the safest skies and our vigilance as aviation's first responders."

Dozens of union activists protested yesterday outside a New York City conference attended by officials of Angelo, Gordon & Co., a Wall Street hedge fund that owns the biggest stake in the troubled telecom company FairPoint Communications. CWA and IBEW members in northern New England have been on strike at FairPoint since Oct. 17.

FairPoint negotiators walked away from the bargaining table in late August and imposed a contract that ended restrictions on subcontracting and outsourcing, froze pensions, increased health care costs for active workers, slashed retiree health care, added a two-tier wage plan and more. That move by FairPoint forced 215 members of CWA Local 1400 in New Hampshire, Vermont, and Maine and 1,500 members of IBEW Locals 2320, 2326 and 2327 to strike.

"The hypocrisy of Angelo, Gordon is appalling," CWA District 1 Vice President Chris Shelton said. "They want to make huge profits by investing public employees' pensions, and then they stand by while FairPoint tries to gut workers' pensions and end retiree health care. This is a betrayal of their investors and the public and we will expose it at every opportunity."

CWA and the IBEW have filed charges with the National Labor Relations Board over FairPoint's illegally imposing contract proposals before the impasse was reached.

A strong majority of Cricket retail employees in both Oklahoma and Arkansas have joined CWA; the results were certified by the American Arbitration Association.

Helping make this happen were:

Sign up now for the next CWA town hall call on Thursday, Nov. 20, starting at 7:30 pm ET. The call will last half an hour.

Register at http://cwa-union.org/cwacall and pick up the phone when you get the call.