Fast Track Fight: Everything is on the Line

The Fast Track action is in the House starting this week, and our progressive coalition continues to fight back against the arm twisting that's going on in both parties.

In a late night session last Friday, the Senate approved Fast Track by a 62-37 vote. That vote was much closer than Fast Track supporters wanted, as they fought to defeat key amendments on currency manipulation and other critical issues. In fact, supporters had predicted that the Senate would have acted on Fast Track months ago. Obviously, the grassroots work of CWAers and allies blocked that path. Now, Fast Track has lost momentum as it now heads to the House, where there are growing Republican objections and overwhelming Democratic opposition.

"We're throwing everything we have at the Fast Track vote in the House because everything is on the line," CWA President Larry Cohen said.

Wednesday, June 3 will be a massive, national call-in day, with members and activists from hundreds of organizations planning to contact their representatives and make their voices heard. This week, there are hundreds of meetings with members of Congress and other district events, and activists are spotlighting the harm that Fast Track will do to the environment, health care and prescription drug costs, food labeling, consumer rights and other issues. "We want our members of Congress to 'clean out their ears' and listen to their constituents," said Robert Longer, CWA Local 9421 Legislative-Political Director.

Jobs are a huge issue and a CWA report released this week shows that service jobs are as vulnerable as manufacturing jobs, as countries like the Philippines and China look to dock onto the trade deal.

In the San Diego area alone, where Reps. Susan Davis and Scott Peters say they haven't decided how to vote on Fast Track, nearly 325,000 service sector jobs - nearly 25 percent of total jobs in the region - are at risk of being offshored. Read the full report.

Also in San Diego, the Sierra Club launched an online and radio ad campaign - in English and Spanish -- that calls the Trans-Pacific Partnership secretive and dangerous for the environment. The ads will run in May and June.

Over the recess, CWAers are taking the lead in scores of events, from Congressional office drop-ins in Sacramento to rallies in Chapel Hill to educational picnics in Greenbelt. In Maryland and Delaware, CWA activists are participating in political boot camps focused on engaging voters in the districts of Reps. Steny Hoyer (D-MD 5th District) and John Carney (D-DE At-large District). 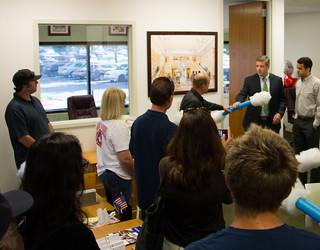 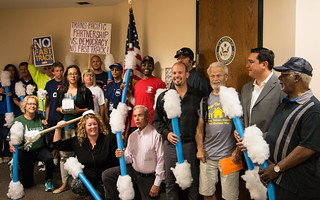 Activists Want Rep. Bera to Clean Out His Ears!

Dozens of workers, environmental activists, veterans, Democratic Party members and other constituents delivered giant Q-Tip cotton swabs, a jar full of 1,600 screws, and 100 postcards to Rep. Ami Bera (D-CA, 7th District) yesterday. Activists are calling on Bera, who said he supports Fast Track Trade Promotion Authority, to reconsider. The 1,600 screws stand for the number of jobs lost in Bera's district as a result of currency manipulation by Japan, a potential TPP partner. 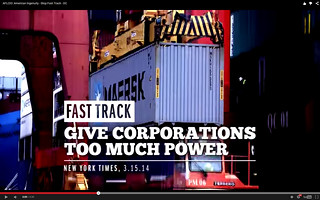 Members of Congress home for congressional recess continue to hear loud and clear from a broad coalition of activists, telling them to reject Fast Track.

The AFL-CIO ad can be seen here. 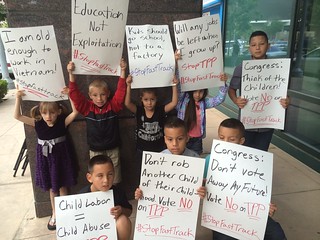 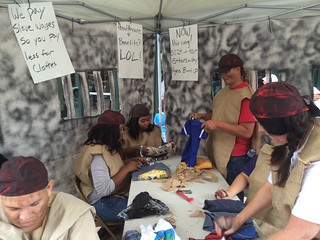 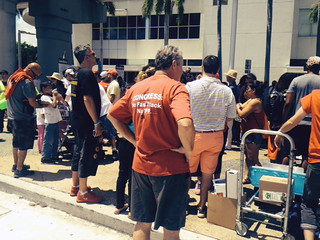 More than 1,000 activists rallied and protested against Monsanto's use of GMO seeds (genetically modified organism) in downtown Miami, and listened as CWA's Fred Frost talked about the food safety and other dangers of Fast Track and the TPP. Food safety activists in the U.S. and around the globe protested Monsanto's actions last week. 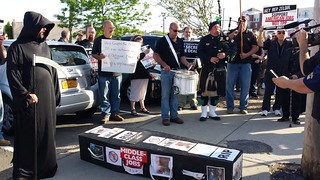 Krugman pointed out that the TPP, contrary to the administration's claims, isn't really about trade at all. It's about Big Pharma and Hollywood lobbying to extend restrictive intellectual property laws. It's about allowing multinational corporations to sue governments in partially privatized tribunals, a process known as investor-state dispute settlement (ISDS).

"Critics like Senator Elizabeth Warren warn that this could compromise the independence of U.S. domestic policy - that these tribunals could, for example, be used to attack and undermine financial reform.

"Not so, says the Obama administration, with the president declaring that Senator Warren is 'absolutely wrong.' But she isn't. The Pacific trade pact could force the United States to change policies or face big fines, and financial regulation is one policy that might be in the line of fire. As if to illustrate the point, Canada's finance minister recently declared that the Volcker Rule, a key provision of the 2010 U.S. financial reform, violates the existing North American Free Trade Agreement. Even if he can't make that claim stick, his remarks demonstrate that there's nothing foolish about worrying that trade and investment pacts can threaten bank regulation.

"As I see it, the big problem here is one of trust."

"International economic agreements are, inevitably, complex, and you don't want to find out at the last minute - just before an up-or-down, all-or-nothing vote - that a lot of bad stuff has been incorporated into the text. So you want reassurance that the people negotiating the deal are listening to valid concerns, that they are serving the national interest rather than the interests of well-connected corporations.

"Instead of addressing real concerns, however, the Obama administration has been dismissive, trying to portray skeptics as uninformed hacks who don't understand the virtues of trade. But they're not: the skeptics have on balance been more right than wrong about issues like dispute settlement, and the only really hackish economics I've seen in this debate is coming from supporters of the trade pact." 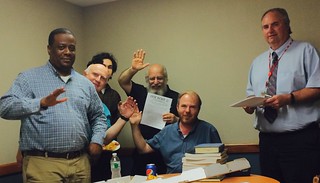 In a unanimous vote, members of TNG-CWA Local 31003 at the Hour ratified a new three-year contract that provides 2% annual wage increases, significant improvements for part-time workers and other gains. Click here to read more on the agreement. 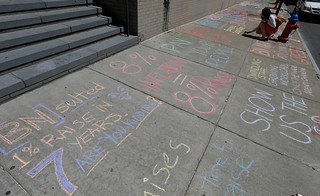 Members of TNG-CWA Local 31026 took to the sidewalks outside the Buffalo News' One News Plaza on May 14 for a job action that involved some creative self-expression. Members wrote messages to management in chalk on the sidewalk, calling on the newspaper to "Invest in our Future," and "Show us the $$$." Click here for more photos of the action. 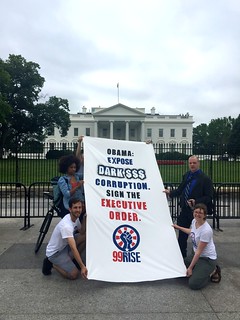 Wednesday, May 27th was a National Day of Action featuring banner-drops in over a dozen U.S. cities, including Pittsburgh, New York City, New Orleans, Sacramento, San Francisco, and in front of the White House, as grassroots activists called on President Obama to sign an executive order requiring that corporations with government contracts disclose their political spending.

President Larry Cohen is ending 10 years as president of CWA on June 8.

To stay connected with Larry and his movement building and democracy work going forward, click here to sign up for messages and the monthly columns he'll be writing, much as he has been doing over the past several years at Huffington Post.