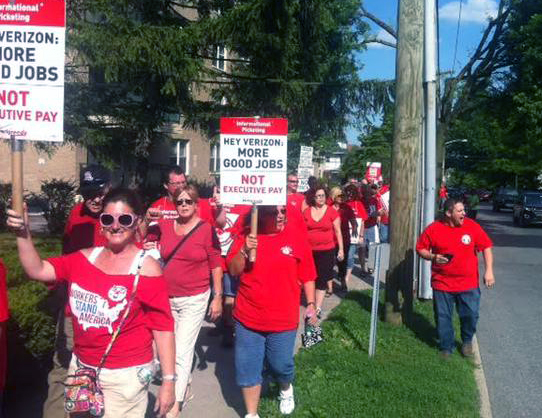 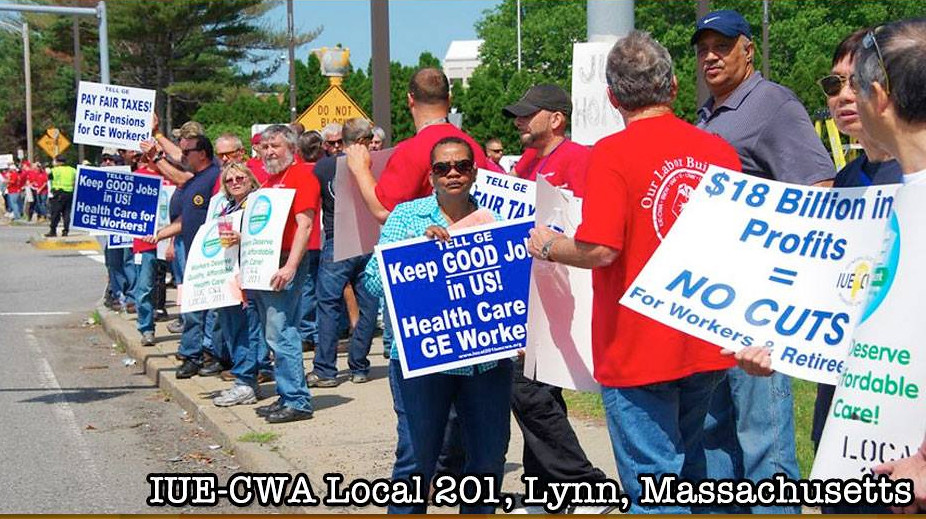 Next Steps on Fast Track and the TPP Fight

As expected, on Wednesday, the Senate approved Fast Track trade authority by a 60-38 vote. Separately, the House passed a bill extending Trade Adjustment Assistance for workers who lose their jobs because of trade; those bills were expected to get to the President's desk before Congress left town for its July 4 recess.

CWAers and allies kept the heat on senators this week, especially for the cloture vote to end debate and move Fast Track to a final vote. Activists also thanked those Senators and House members who continue to stand with working families. (See story #3 for more.)

On the cloture vote, 13 Democratic senators joined most Republicans in showing that they're on the side of the 1 percent, not working families.

These Senators caved to corporate interests that want access to poverty wages in Vietnam and the ability to challenge any U.S. laws they believe will get in the way of "future expected profits." No surprise, a deal that corporations want so badly is fast tracked, because they spent millions of dollars to make it happen. But issues that affect ordinary Americans, like investment in our country's roads and transportation, an increase in the minimum wage or some real attention to climate change, just get shoved aside. Read CWA's statement here.

CWA President Chris Shelton said CWA and our allies will be holding Senators and House members accountable for this vote. "We'll stand with those members of Congress who supported our communities, and for those who opposed the broadest coalition of Americans ever, we will find and support candidates who will stand with working families. That's how we'll take on the corporate Democrats who oppose a working family agenda."

Now, as the TPP moves forward, we will continue to shine a light on the serious problems in this trade deal, from lost jobs in the U.S. to expanded corporate rights under the Investor-State Dispute Settlement (ISDS) process to concerns about food safety and prescription drugs.

We'll continue to remind the Obama administration about the big promises it made, and that we're holding them accountable, too.

Former CWA President Larry Cohen continues to help lead the fair trade coalition. "We will hold our government and the U.S. Trade Representative responsible for real enforcement of the human rights provisions of these agreements both in the U.S. and with our so-called partners. Last week Honduran trade union leader Hector Motino was murdered as he drove home from work. I had met Hector in Honduras and heard about the death threats he faced and the 200 human rights activists who were murdered in Honduras since the labor movement filed a complaint under the Central America Free Trade Agreement (CAFTA). We will demand real change, not just text that cannot be enforced."

In the run-up to the U.S. Senate's vote this week on cloture for Fast Track authority for the Trans-Pacific Partnership, CWA activists and grassroots partners across the country rallied in the districts and outside the offices of Democratic Senators, some of whom turned their back on working families. 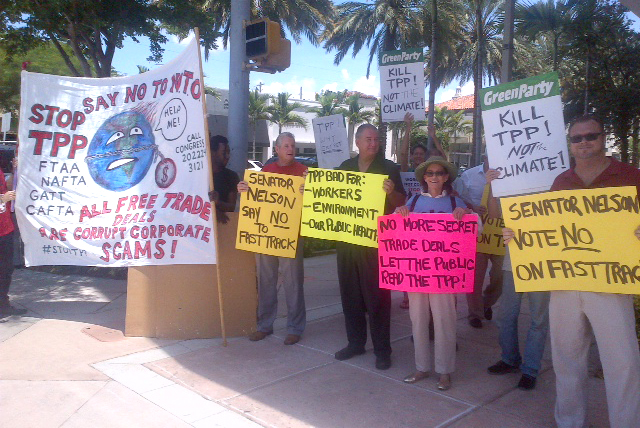 On Monday activists from CWA Local 3122 delivered over 8,000 "No Fast-Track" petitions to Sen. Bill Nelson's (D) district office in Florida. Police and building security refused to let the activists, constituents of Nelson, in the building. 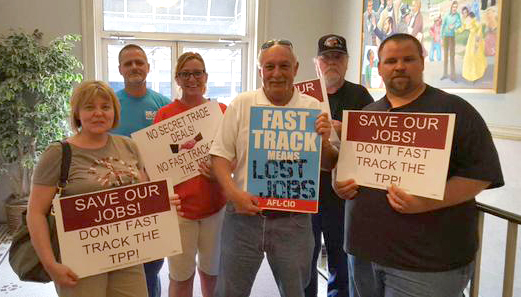 Members of IUE-CWA Local 86821 and other allies visited Missouri Senator Claire McCaskill's office this week to urge her to vote no on cloture for Fast Track. 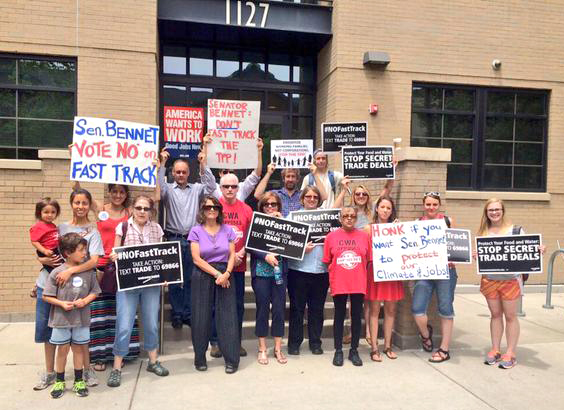 CWA District 7 locals, Food & Water Watch, SEIU, AFL-CIO and 350 Colorado all turned out folks to call on Sen. Michael Bennet (D) to do the right thing. Activists encouraged drivers to "Honk if you want Colorado Senator Michael Bennet to protect our climate and jobs." Although Bennet's staffer maintained that he was still undecided, he ended up betraying his constituents by voting for cloture. 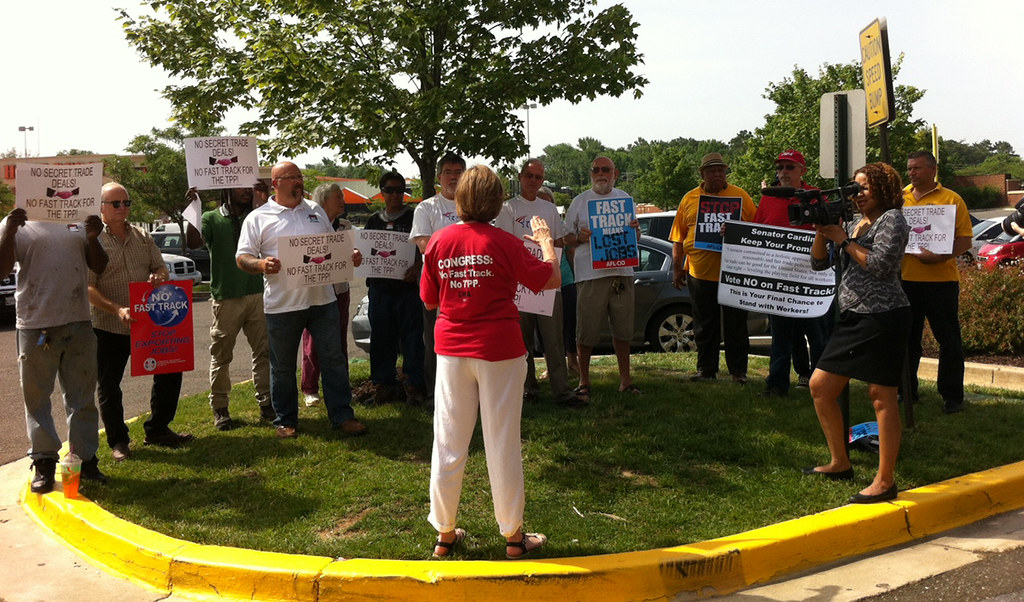 CWA activists and allies in Delaware raised the "No Fast Track" message at the offices of Senators Tom Carper and Chris Coons.

In the run up to the vote, activists also appeared at the offices of Senators Diane Feinstein (D-CA), Jeanne Shaheen (D-NH), Ron Wyden (D-OR), Patty Murray (D-WA) and Maria Cantwell (D-WA), all of whom refused to listen to constituents and activists who have supported their campaigns.

Sen. Warren: Trade Agreements Should Benefit All Americans, Not Industry Only

U.S. Sen. Elizabeth Warren (D-MA) proposed, in an opinion-editorial published in the Boston Globe this week, a trade policy that produces a good deal for all Americans – not just for a handful of big corporations. "Here's a realistic starting point: Fix the way we enforce trade agreements to ensure a level playing field for everyone."

In a summer of voting rights actions across the nation, more than four hundred activists, including busloads of CWA members, held a rally today in Roanoke, Va., to mark the second anniversary of the Supreme Court's Shelby County v. Holder decision that gutted the Voting Rights Act. 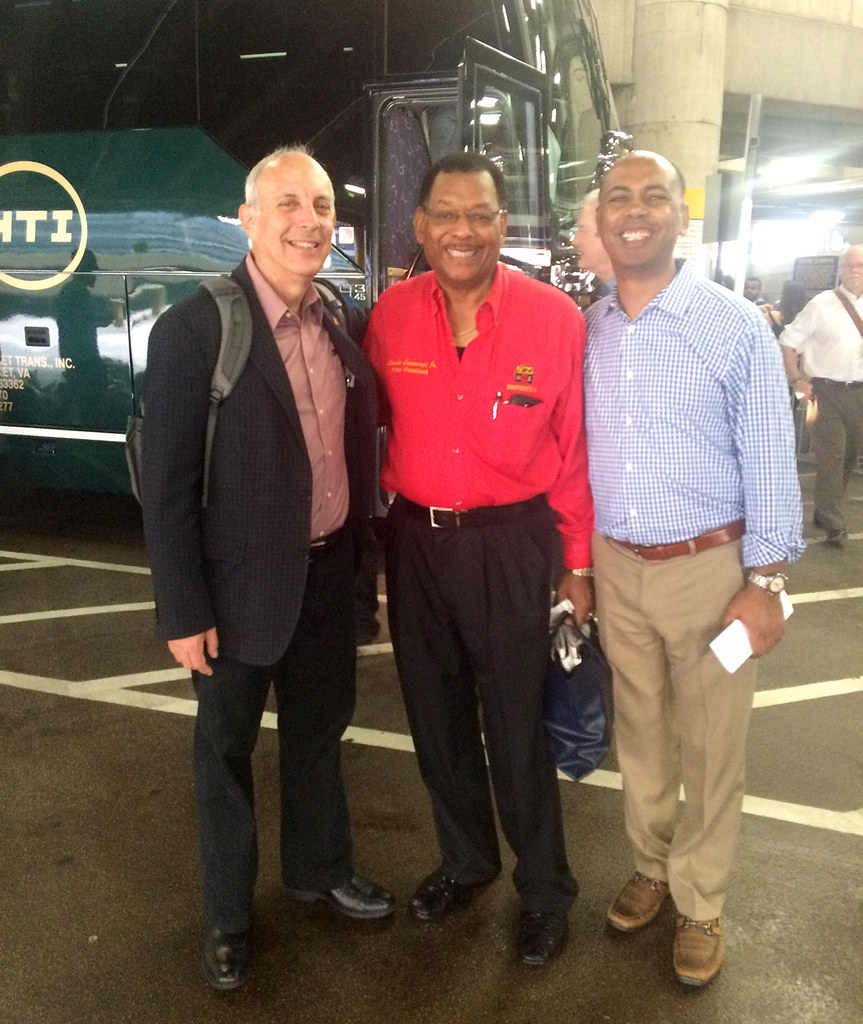 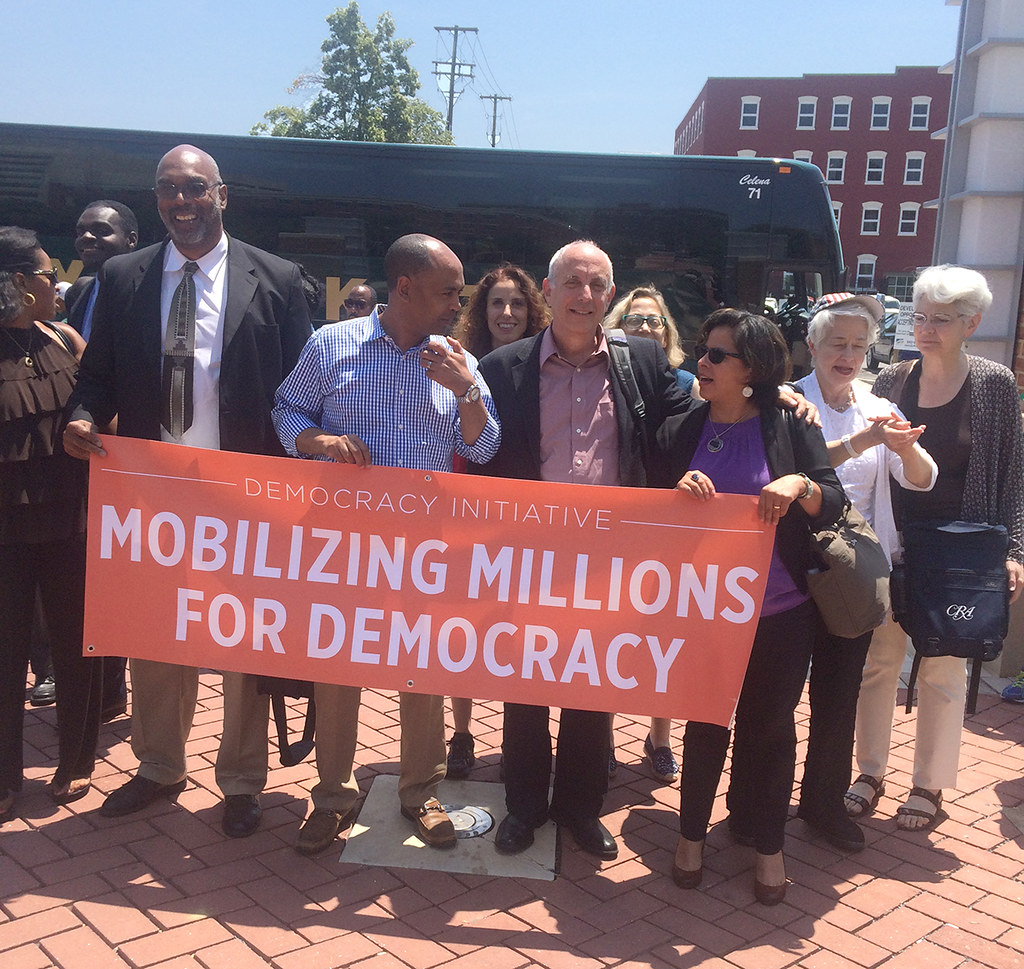 The action spotlights the refusal of House Judiciary Committee Chairman Bob Goodlatte (R-VA 6th District) to hold a committee hearing on the need to restore voting rights protections that were stripped away by the U.S. Supreme Court two years ago. We have come to expect this from Rep. Goodlatte, who also blocked a hearing on immigration reform.

CWA, a founding organization of the Democracy Initiative, turned out the rally crowd in partnership with the Leadership Conference on Civil and Human Rights.

"The Voting Rights Act is fundamental to our democracy, and it is outrageous that on the two year anniversary of the Shelby decision, we have yet to even have a single Congressional hearing to fix it," Democracy Initiative Chairman Larry Cohen said. "The Democracy Initiative worked with the Leadership Conference on Civil and Human Rights to organize the rally in Roanoke and Rep. Goodlatte would be wise to take notice of the growing movement at his doorstep. His obstruction will not go unnoticed as Americans across the country demand full voting rights similar to those in every other 21st century democracy."

"More than 50 years ago, people suffered tremendously for the right to vote," Claude Cummings, CWA District 6 vice president, said. "We thought that battle was won when the Voting Rights Act was passed, but sadly, we must continue to fight against attacks on our right to vote."

Congress has failed to take any action to restore the Voting Rights Act. Yesterday, Rep. John Lewis (D-GA 5th District) and Sen. Patrick Leahy (D-VT) introduced the Voting Rights Advancement Act of 2015 to begin to correct some of the worst aspects of the Shelby decision. Backed by civil rights groups, this bill is an improvement over a bipartisan milquetoast bill introduced last year that never even got a hearing.

The new bill is expected to garner support from progressive lawmakers because it is tougher but could lose some Republicans. 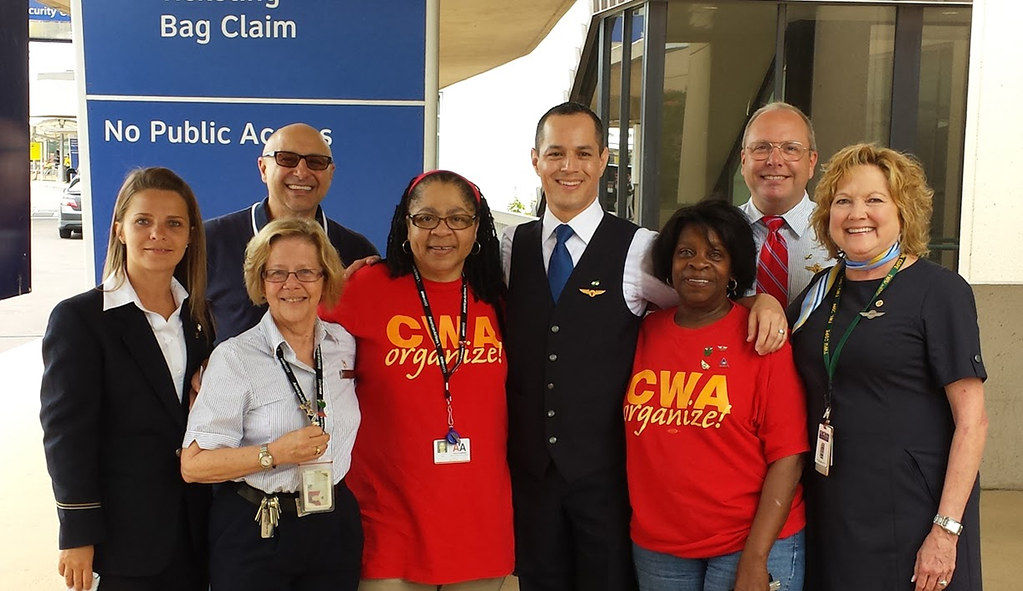 CWA members filled the halls of the New Jersey Statehouse this week, part of the Lobby Day for full pension funding.

CWAers held hundreds of face-to-face meetings with Senate and Assembly members, telling them to commit to making a full pension payment and to vote to override a potential veto by Gov. Christie.

CWAers in New Jersey are fighting back against the attack on their pensions that's been waged by Gov. Chris Christie. 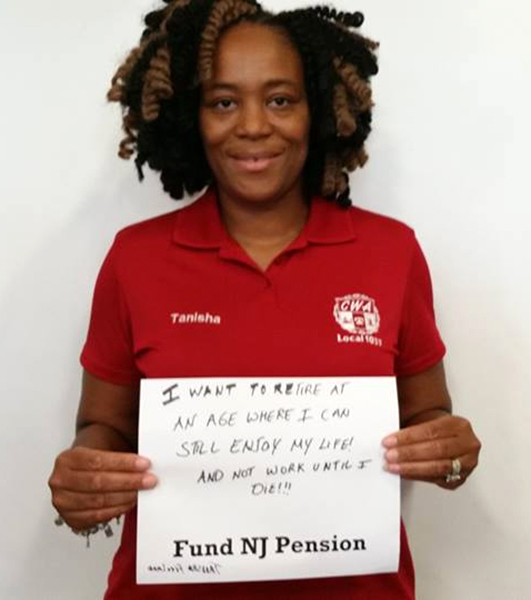