In the 1930s, workers took to the streets, protesting poor working conditions, low wages and exploitative labor practices. Some died fighting for their rights. As a result, President Franklin D. Roosevelt and Congress established the National Labor Relations Board to provide workers a place to seek justice.

Today we are on the verge of losing the NLRB.

Join the CWA Town Hall Call tonight at 7:30 p.m. ET to take a stand and learn how you can fight back.

Our democracy is in distress, dominated by corporate America. To achieve democratic change, we must push back against corporate and billionaire-funded efforts to suppress voter participation, stop the influence of corporate money in our political system and end the obstruction and abuse of the Senate rules.

Watch the live stream at 4:30 p.m. PST at fixthesenatenow.org/pages/three-keys-to-reclaiming-our-democracy.

CWA Legislative and Political Team activists continued to press their Senators on the need to confirm all five Presidential nominations to the NLRB, and to change the Senate rules, if necessary, to get it done.

Indiana CWAers met with Senator Joe Donnelly on June 7, said State LPAT Coordinator Angie Schritter. So far, the team has delivered 251 signed letters and about 20-30 new letters come in every day, she said. At worksites, LPAT activists are handing out flyers and urging members to make phone calls. 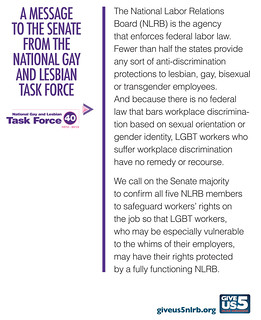 In Colorado, activists had a meeting with Senator Mark Udall and reported that the senator is completely on board with why we need a fully functioning NLRB and changing the Senate rules to make it happen. An active CWA retired members' council is helping with letters and phone calls.

Plans are in the works for a National Day of Action on July 2, with CWAers, especially in critical states, holding rallies and meetings outside their senators' district offices and hitting as many worksites as possible to help members make those calls to Capitol Hill. "We want to generate tens of thousands of telephone calls to senators, and remind them that we expect the Senate Democratic majority to change the rules if necessary to get all five NLRB presidential nominations confirmed," said CWA Chief of Staff Ron Collins.

The National Gay and Lesbian Task Force publicized its support for a fully functioning NLRB in an ad in The Hill, a Capitol Hill newspaper that reaches members of Congress and their staffs.

"The National Labor Relations Board (NLRB) is the agency that enforces federal labor law. Fewer than half the states provide any sort of anti-discrimination protections to lesbian, gay, bisexual or transgender employees. And because there is no federal law that bars workplace discrimination based on sexual orientation or gender identity, LGBT workers who suffer workplace discrimination have no remedy or recourse. We call on the Senate majority to confirm all five NLRB members to safeguard workers' rights on the job so that LGBT workers, who may be especially vulnerable to the whims of their employers, may have their rights protected by a fully functioning NLRB."

Fly In Lobby Day on Immigration and NLRB

As part of the "Fly In" on the NLRB and immigration reform, Robert England, an LPAT activist and member of CWA Local 9415, met with House Democratic Leader Nancy Pelosi and Senator Barbara Boxer's staff.

CWA's Ron Collins Gets Arrested for Mine Workers 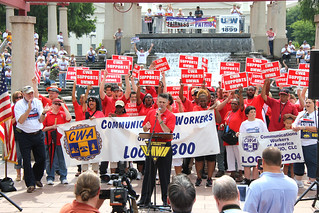 Below: Collins is arrested. 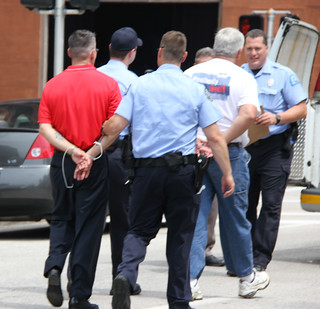 CWA members continue to be a big part of the thousands of activists who protest at Peabody/Patriot Coal locations.

In St. Louis last week, CWA Chief of Staff Ron Collins fired up the crowd, then was arrested along with United Mine Workers members. Check out this video.

Patriot executives now say they are willing to resume negotiations; about a week ago, Patriot said it wasn't interested in bargaining with the UMWA. A bankruptcy judge has approved Patriot's bid to throw out its collective bargaining agreements and slash retiree health care; the judge said cuts can begin as early as July 1.

Hundreds of CWA activists have participated in rallies and actions in St. Louis and Charleston, WVa., to protest Peabody's move to strip retiree health care benefits from 23,000 miners and their families.

"We all know that the resources needed to really solve these problems are piled up in the corporate coffers of Peabody Energy and Arch Coal. Those two companies made billions from the sweat and hard work of our members, and if these executives think we're going to sit idle while they abandon their promises and put our members at risk - well, then they don't really know or understand the United Mine Workers of America," said UMWA President Cecil Roberts.

The union is working with members of Congress from both parties to pursue legislative remedies and has an ongoing public education campaign with a "Peabody Lied" television ad currently running in St. Louis and Evansville, Ill.

TU activists at the Albuquerque, NM, call center were joined by ver.di union members, Deutsche Telekom workers from Bavaria, Germany, in leafleting and building support for a union voice at T-Mobile USA. ver.di is the union that represents DT and T-Mobile workers in Germany, and ver.di members are supporting the fight for justice among U.S. workers. CWA Local 7011 members joined the action.

Below: ver.di activists join the leafleting at the T-Mobile call center in Albuquerque.

In Minnesota, CWAers and Take Action Minnesota activists are starting early to make sure union voters have all the information they need about Rep. John Kline (R), chairman of the House Education and Workforce Committee.

Today, they're knocking on doors in Kline's district, telling members about Kline's record. Among his votes: against fairer union representation elections for workers, against health care reform, against preventing student loan interest rates from skyrocketing. Elected to Congress in 2002, he has a 0 percent rating from the AFL-CIO.

Arizona Governor Jan Brewer has signed a controversial election bill, HB 2305, that will suppress the right to vote, restrict citizens' use of the initiative process and limit voter choice by making it more difficult for third parties to run candidates for office.

The measure is an extreme overhaul of the state's voting law. The governor's office said that concerns that voters will be disenfranchised were "overblown."

Among the changes is the purging of the state's early voting rolls. Any who didn't use an early voting ballot in the November 2012 elections faces being dropped from the early voter list.

The measure lowers the number of signatures needed for Republicans and Democrats to quality for statewide and legislative races, but dramatically increases the number needed for third parties like the Green party and others. Republicans in Arizona and other states believe that limiting the votes received by Libertarian Party candidates will boost the election of Republican candidates.

The bill makes it a crime for volunteer political workers and organizations to collect early ballots from voters and take them to polling places. The Democratic Party and voter advocacy groups have provided this service to voters for many years, at voters' choice.

Last week, the U.S. Supreme Court threw out an Arizona requirement that prospective voters document their U.S. citizenship in order to use a "Motor Voter" registration form.

TNG-CWA will host a forum on Wednesday, June 26, at the National Press Club in Washington, D.C., with a special focus on the bid by the Koch brothers to buy the Tribune Newspapers.

The Koch brothers, who are right wing billionaires and big supporters of Wisconsin Governor Scott Walker who launched a major attack against public workers and their unions, are interested in buying the newspaper group that includes the Los Angeles Times, the Chicago Tribune, Baltimore Sun, Orlando Sentinel and others. Activists have been protesting outside the Los Angeles Times, raising concerns that the Koch's right-wing agenda would take over news coverage.

The session is titled, "Should the Koch Brothers Own the Tribune Newspapers?" but will go far beyond that debate, said TNG-CWA President Bernie Lunzer said. "The Koch brothers are a good catalyst for this discussion because their interest in the Tribune newspapers has helped renew and expand the debate about who owns and who should own our newspapers, TV stations and other media, and how much of that media any one owner should control."

To participate by webcast, send your name, title, organization and contact information to invest@aflcio.org. The AFL-CIO also is participating in the forum.

CWA commended a bipartisan group of Senators for their work on an amendment to comprehensive immigration reform that will safeguard jobs and opportunity for U.S. workers and students in STEM fields – Science, Technology, Engineering and Mathematics.

This amendment is an important fix to S. 744, the Border Security, Economic Opportunity, and Immigration Modernization Act. Today, recent U.S. graduates in STEM fields face unemployment rates of 7.4 percent (engineers) and nearly 6 percent (in mathematics). U.S. students studying for occupations within the STEM sectors need to know that jobs and opportunity will be available to them as they continue their studies.

It would be ironic if the increase in STEM funds to help students pay for education, created as part of a compromise over H-1B visa levels, leads to a greater number of U.S. students who can't find work in their STEM profession, CWA said.

High skill U.S. workers also need assurances that they will not be dumped by employers looking to abuse the H-1B program and offshore their work.

CWA urges the U.S. Senate to debate, vote on and adopt this amendment to comprehensive immigration reform.