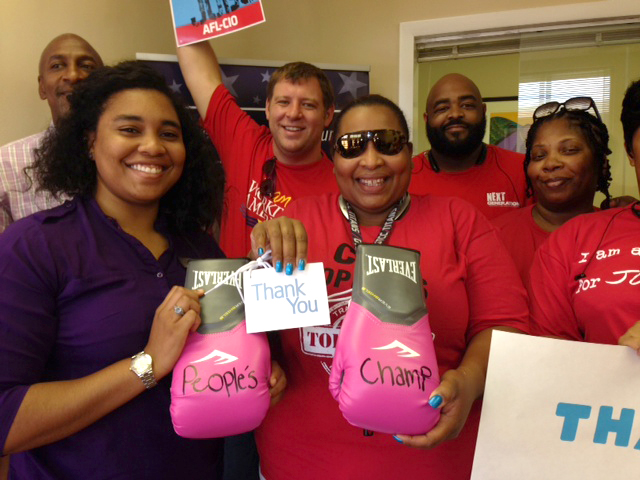 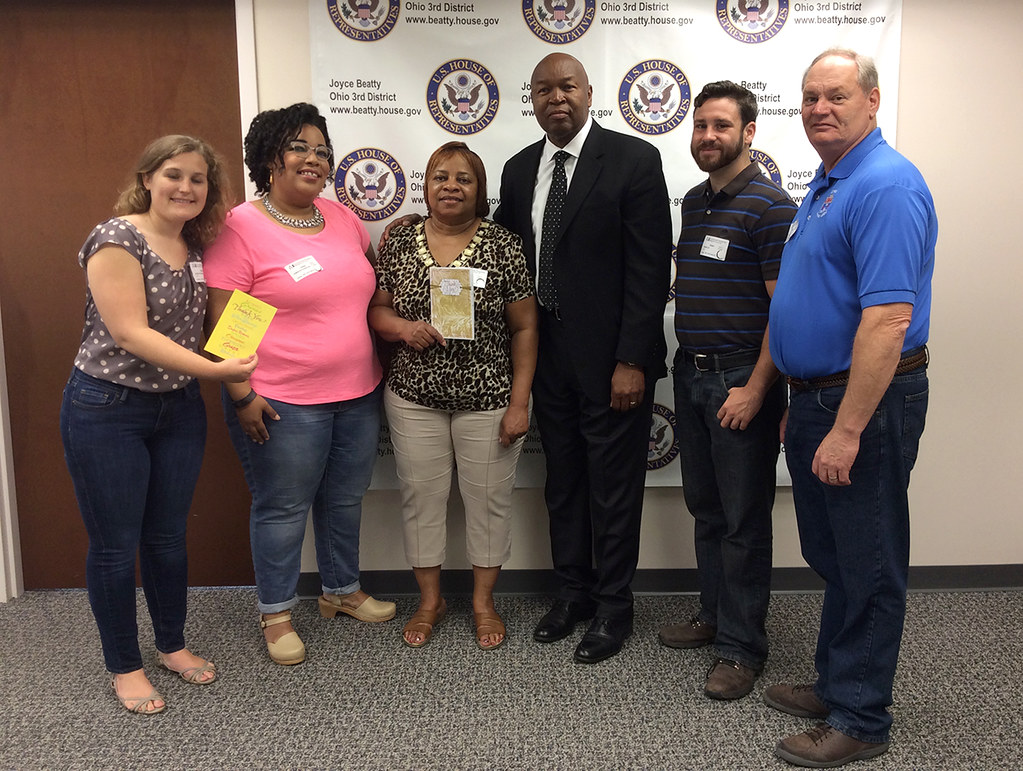 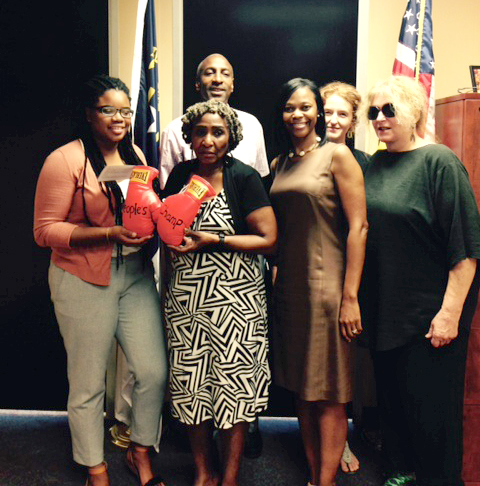 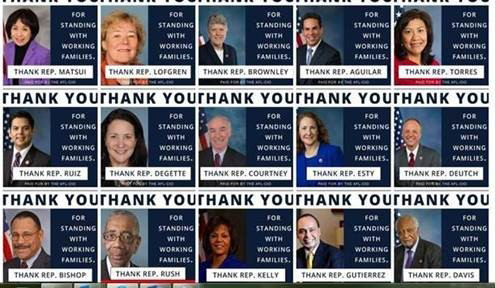 In actions at airports across the country, AFA-CWA Flight Attendants called for an end to the discriminatory wage policies that enable airline management to pay Regional Flight Attendants less for the same work. 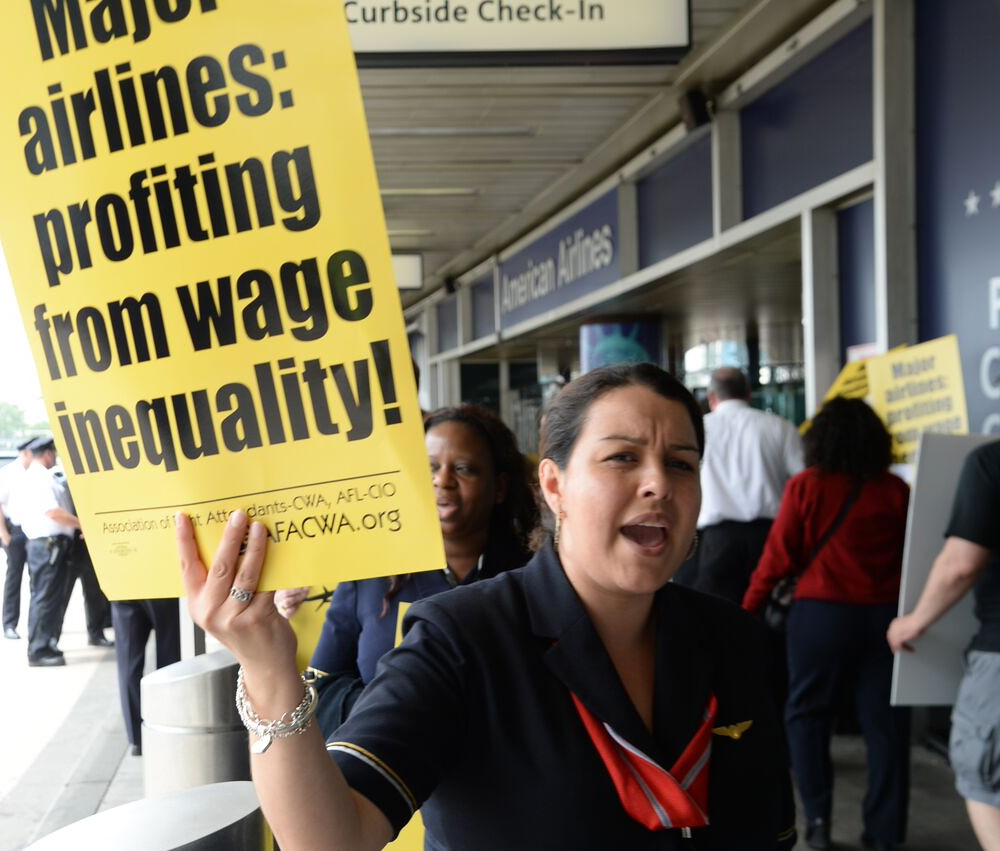 The "Bridge the Gap" campaign is fighting to ensure equal pay for equal work for all Flight Attendants. Regional Flight Attendants earn 40 percent less than their colleagues at mainline airlines, even though they perform the same work and connect with the same passengers.

"The U.S. airline industry is crucial to the success of our economy, as are the Flight Attendants who are frontline employees and serve a crucial role in keeping passengers safe," said AFA International President Sara Nelson. "Flight Attendants are united for our careers and committed to lifting standards across the industry."

CWA is calling out Verizon Communications for refusing to repair broken copper lines and instead pushing customers instead to Voice Link, a wireless phone service that can't support Internet connections, home health monitors, or security systems.

CWA District 1 Vice President Dennis Trainor pointed out that, "[as] a public utility, Verizon has a duty to maintain service for all customers. But we've seen how the company abandons users, particularly on legacy networks, and customers across the country have noticed their service quality is plummeting."

Ed Mooney, CWA Vice President District 2-13, said that Verizon has walked away from its responsibility to provide quality telecommunications services to customers. Our information requests "will shine a light on Verizon's failures and help the public hold Verizon accountable."

At the GE bargaining table last week, IUE-CWA President Jim Clark put management on notice that workers made hard choices in the last round of negotiations for job security and the future of GE's U.S. facilities. "Shifting costs to our members is not the answer," he said, adding, "health care has to be fixed before we leave here."

IUE-CWA's contract negotiations with General Electric Co., got underway on June 1 in New York City. The negotiations cover 10,000 IUE-CWA workers and another 6,000 workers from other unions, including the IBEW, Auto Workers, Machinists and United Electrical Workers (UE). The contract expires June 21. Read more at www.geworkersunited.org.

IUE-CWA members are mobilizing across the country as they count down to contract expiration. Here, members of IUE-CWA Local 83161 in Salem, Va., (top) and IUE-CWA Local 86004 in Arkansas City, Kansas, are standing strong for a fair contract.

Since early June, union members throughout the Verizon East footprint – New York, New Jersey, New England and the mid-Atlantic states – have been holding informational pickets, telling the company that "we want good jobs at Verizon."

"Instead of creating good jobs, Verizon paid its top executives a quarter of a billion dollars over just five years. We need more good jobs, not executive pay," is the message. Keep up with the latest at http://standuptoverizon.com/. 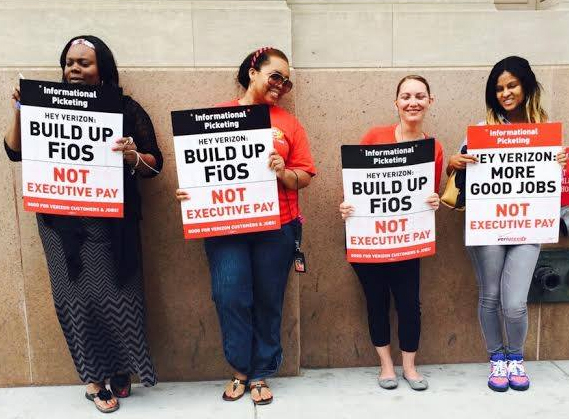 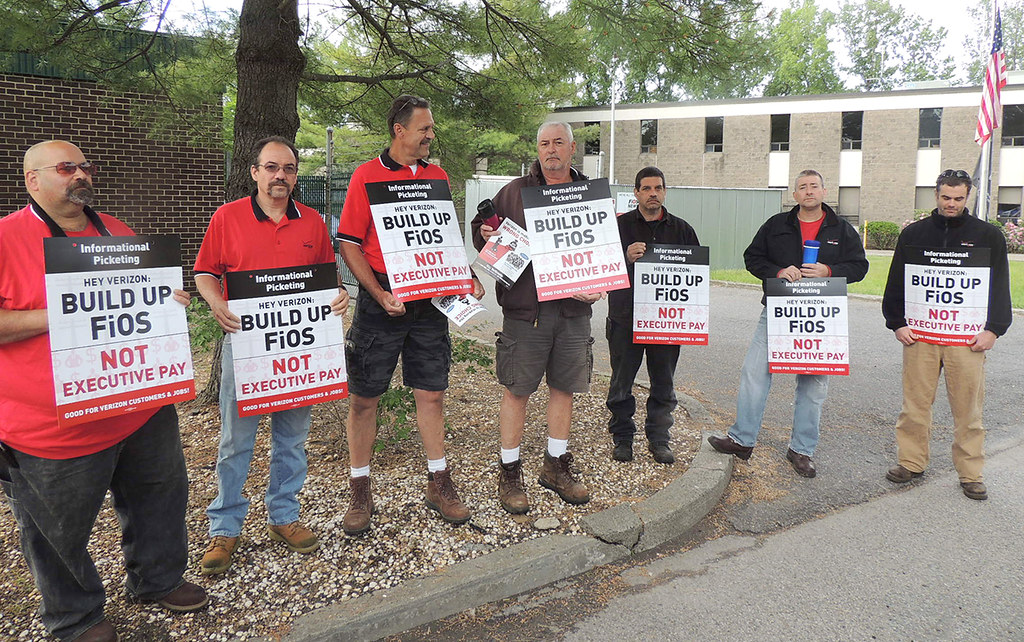 CWA members in District 3 are ready to mobilize as contract negotiations open on June 23. The contract covers more than 27,000 CWA-represented workers. 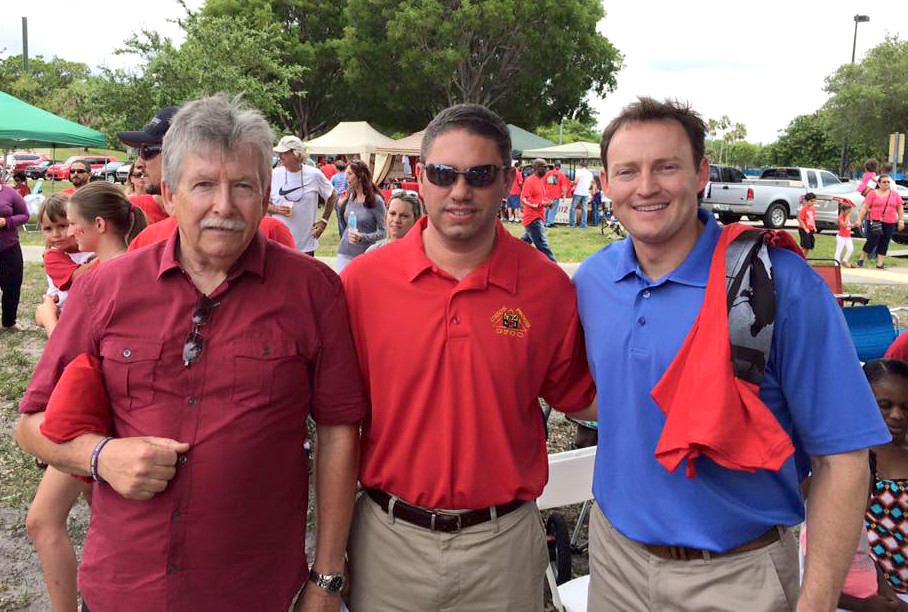 Below: Hundreds of D3 CWAers turn out for the solidarity rally for AT&T bargaining. 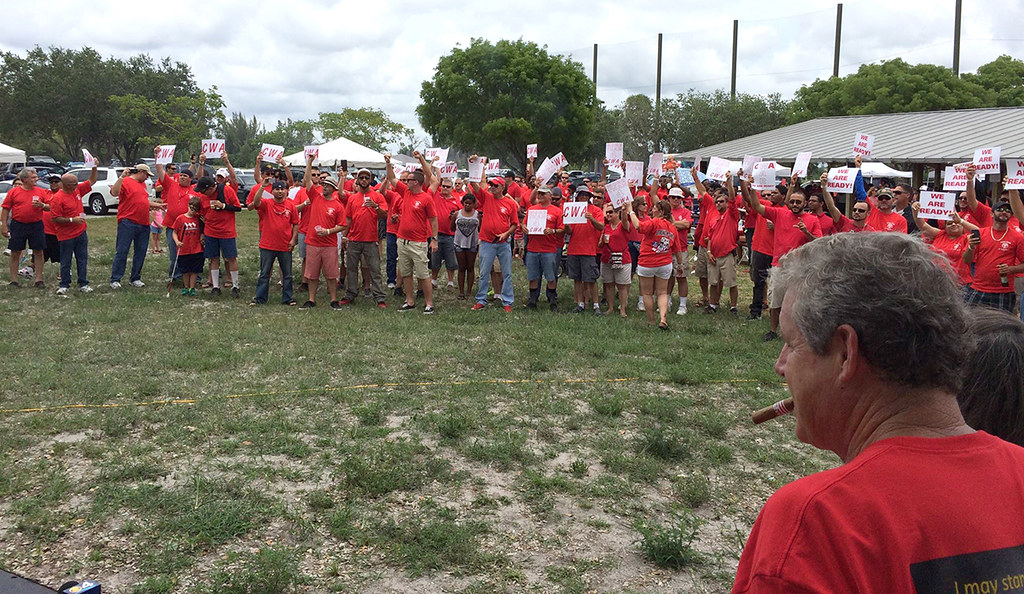 In a significant policy change following weeks of public pressure, T-Mobile US said it will change the way it sets work schedules for thousands of call center workers nationwide. Candace Harrison, who works at the T-Mobile Albuquerque call center, speaks out for fairer scheduling.

"We are happy that the company is addressing the very issue that we have been raising about scheduling problems over the past weeks," said Ashley Charzuk, a T-Mobile retention representative and member of TU, the union of T-Mobile workers. "This is a huge success for workers, and it couldn't have been accomplished without us union activists speaking out against unfair scheduling policies."

Up until the changes, each day T-Mobile allotted a certain number of "pre-approved time-off" (PRETO) hours per center that workers could use on a first-come, first-served basis. If a worker wakes up sick, she immediately would call in to claim those hours. But if second worker also needs to call in sick, there may be too few "pre-approved" hours and the second worker is penalized for being sick. These occurrences have negative consequences for workers' rank and end-of-the-year bonus.

In May, T-Mobile announced it would double the amount of PRETO hours available for workers to request time off. In early June, the company said it was considering separating vacation and sick time. And last week, T-Mobile announced that it would be dropping the retaliation against individual workers when the facilities "pre-approved" hours are exceeded.

The changes were made just as the city council in Albuquerque, N.M. – where T-Mobile has two call centers – prepares to introduce a proposal that would implement paid sick leave and scheduling improvements. It's the result of TU, CWA, The Center for Popular Democracy, Albuquerque community organization OLÈ and a growing coalition of activists partnering to restore a fair workweek for all workers in Albuquerque. Last week the coalition hosted a town hall meeting on irregular scheduling, where Albuquerque City Council members pledged to support their fight for a fair workweek including the right to take sick leave without retaliation.

'Journey for Justice' Spotlights Need for Action on Voting Rights

The NAACP, along with a broad coalition of partners, announced America's Journey for Justice, an 860-mile March from Selma, Alabama, to Washington, DC, starting Aug. 1. The march marks the 50th anniversary of the Voting Rights Act and will spotlight the need for action to restore and safeguard citizens' right to vote. 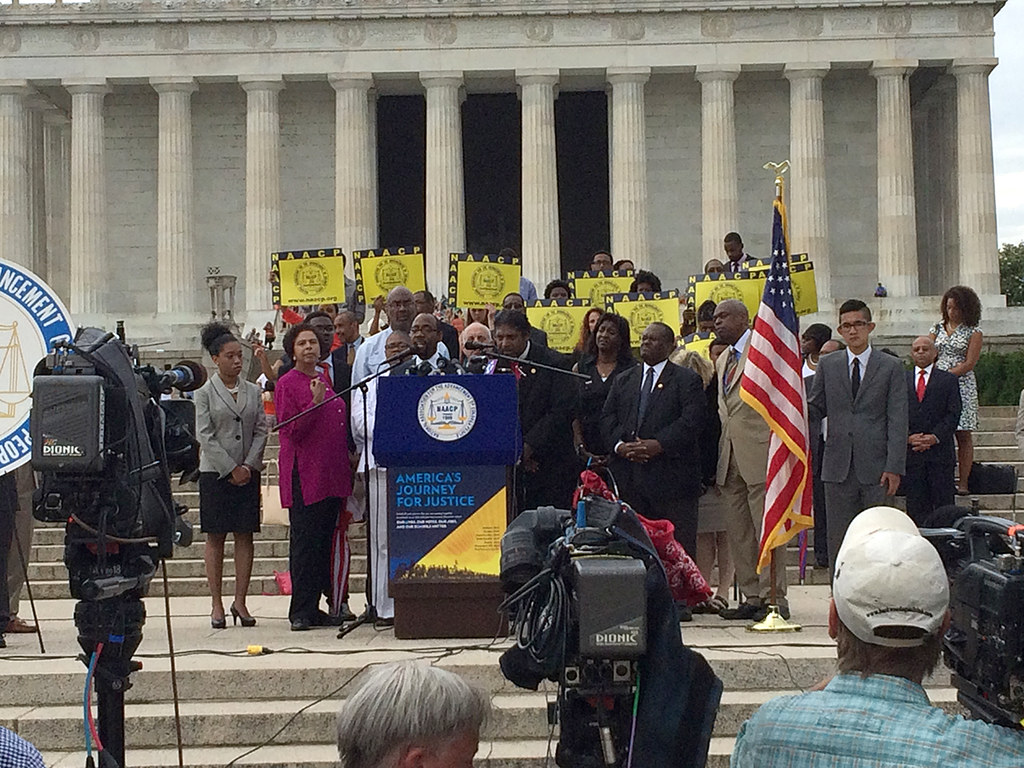 Rev. William Barber addresses activists at the Lincoln Memorial, part of the launch of the "Journey for Justice" for voting rights.

Leaders and activists announced the march at a news conference at the Lincoln Memorial. Cornell William Brooks, NAACP President and CEO, said the action will mobilize activists and advance a focused national policy agenda that protects the right of every American to uncorrupted access to the ballot box, a fair criminal justice system, sustainable jobs with a living wage and equitable public education.

Larry Cohen, chair of the Democracy Initiative, said, "We're going to march and organize across the South, and together, be a part of this fight for justice."

Activists will march under the banner that "Our Lives, Our Votes, Our Jobs, Our Schools Matter." The march coincides with the 50th anniversary of the Voting Rights Act and will feature rallies and teach-ins along the route, ending in a rally in Washington, D.C.

On Thursday, June 25, hundreds of activists, including a busload of CWAers, will rally in Roanoke, Va., to mark the second anniversary of the Supreme Court's Shelby County v. Holder decision that gutted the Voting Rights Act and to call for action to defend the right to vote.

Wade Henderson, president and CEO of the Leadership Conference on Civil and Human Rights, said this action will focus on the failure of Rep. Bob Goodlatte, who chairs the House Judiciary Committee and represents the Roanoke area congressional district, to acknowledge widespread voting discrimination or allow a committee hearing. "Virginians currently live under racially gerrymandered districts and understand that protecting voting rights for all means holding Congress and Rep. Goodlatte accountable for ignoring the responsibility to act."

The children of three CWA members were awarded Union Plus scholarships for 2015.

For 2015, Union Plus awarded $150,000 in scholarships to 106 students representing 36 unions. Learn more about the Union Plus scholarship program, and obtain an application, at www.UnionPlus.org/Education.

Photos from the 75th Convention

Delegates to the CWA 75th convention adopted policies, reports and actions to keep our union moving forward. See photos of all the action here.