This is it. Tomorrow is the day. We've been working, mobilizing and fighting back against Fast Track for bad trade deals like the Trans-Pacific Partnership (TPP) and it all comes down to tomorrow.

We have 24 hours to make a difference, so let's do it.

CWAers are keeping the heat on their congressional representatives, urging them to vote NO on Fast Track and NO on the plan to fund a weakened Trade Adjustment Assistance (TAA) program by siphoning off $700 million from Medicare.

This video, produced by CWA Digital Comms, is circulating on Capitol Hill now. We need our members of Congress to listen to us. 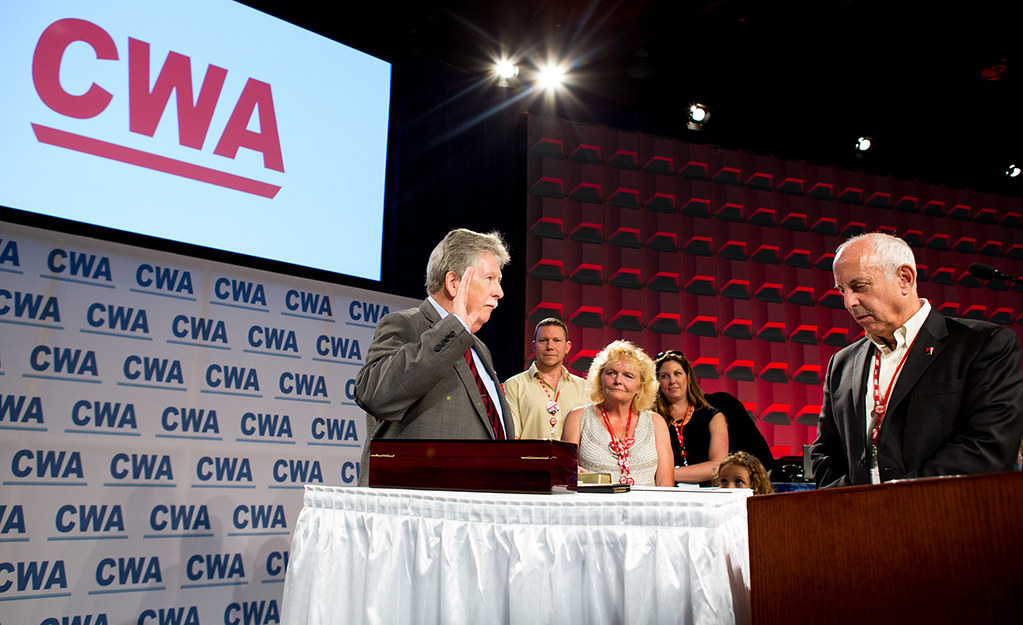 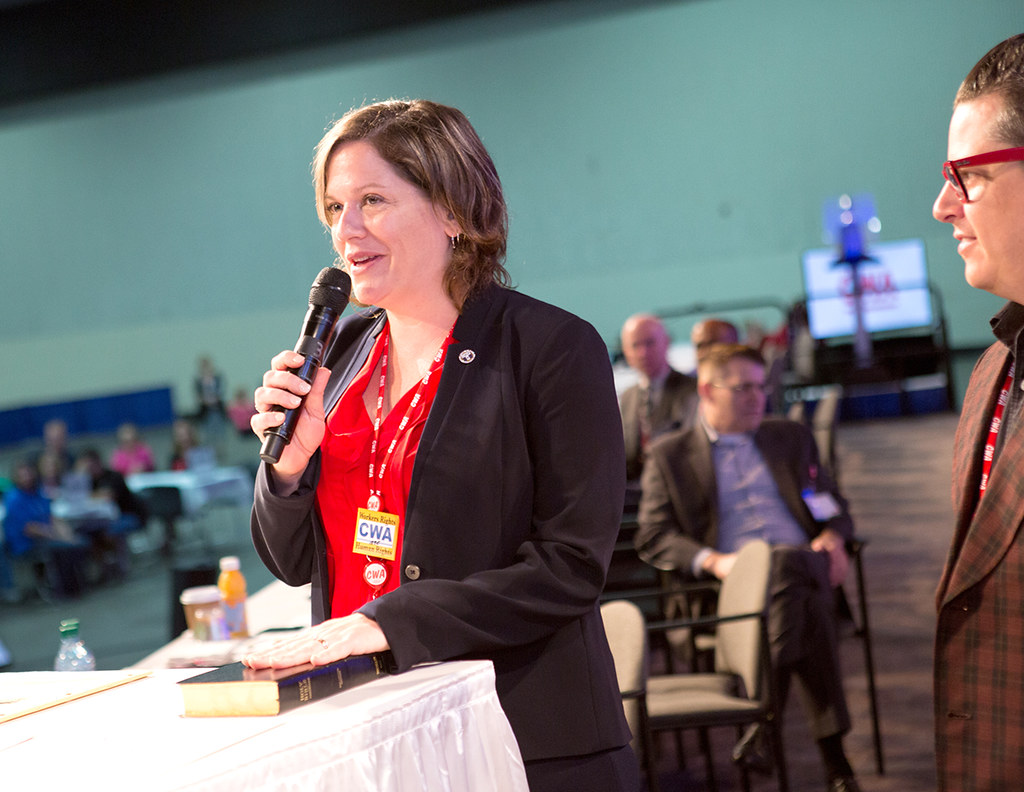 Shelton called on CWAers to "unite and fight because we are fighting to defend the living standards not just of our members, but of the entire working class. That is our job and that is our mission."

Shelton succeeds Larry Cohen who stepped down after serving as president for ten years and spending 39 years organizing in CWA.

Shelton started his union career when he went to work for New York Telephone in 1968 as an outside technician. He was elected a CWA Local 1101 shop steward in 1968 and held several offices in the local before joining the union's national staff.

As TNG-CWA Secretary-Treasurer, Steffens managed the TNG-CWA operating budget, its investments and other funds. She assisted locals with fiscal and legal compliance and also served on the NewsGuild's collective bargaining and legal services committees.

In other election results: 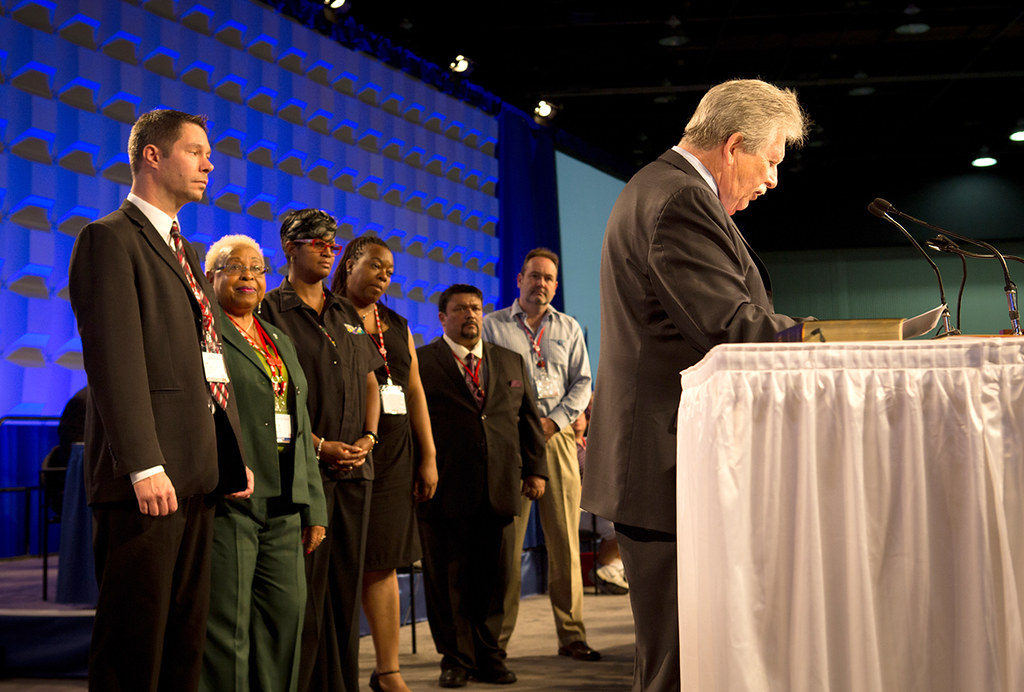 CWA vice presidents and other executive board members took the oath of office, administered by CWA President Chris Shelton. Here, the four at-large diversity members, the PPMWS executive officer and the director of TNG-SCA Canada are sworn in.

Shelton: 'Will You Stand Up and Fight for Every Member of CWA?'

In his opening address, CWA President Chris Shelton pledged to spend every day for the next four years strengthening our union and rebuilding our beloved labor movement. 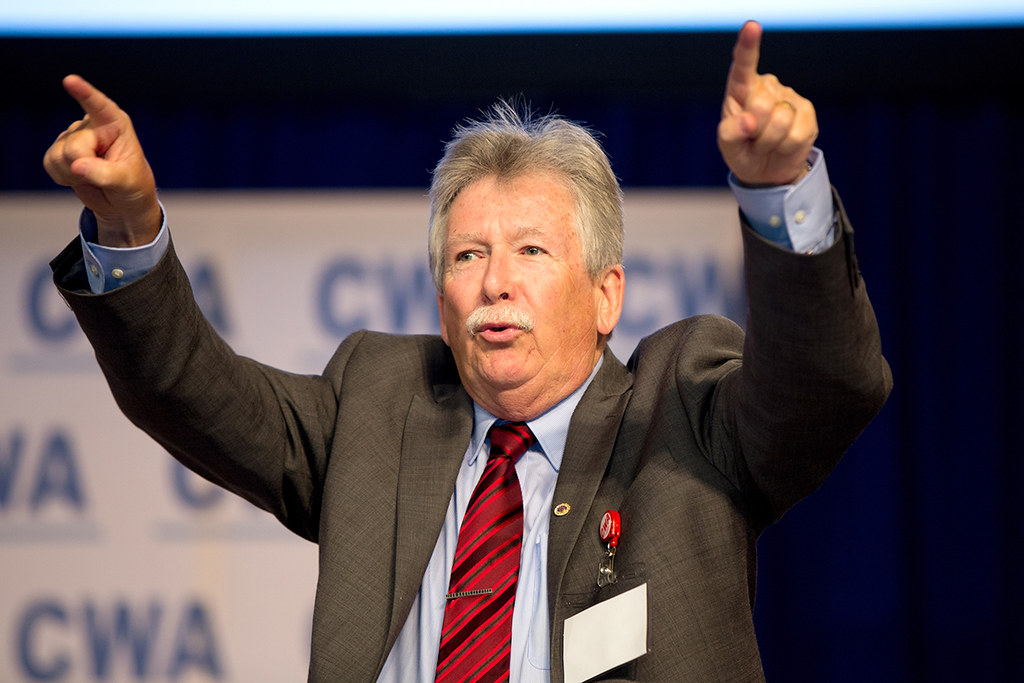 CWA Chris Shelton rallies delegates to stand up and fight for every CWA member.

"CWA needs each and every one of us to unite to join the fight to become a union like we have never been before, one where every member has every other member's back, one where every local joins with every other local, and there are no phony dividing lines between districts and sectors or from one occupation to another. A union where we all fight side by side in every fight, everywhere."

In his last keynote address as CWA President, Larry Cohen told delegates that "we can't keep playing by their rules – the deck is stacked, the dice are loaded, the game is fixed." To change that stacked deck, "we need allies and deeper coalitions because the obstacles are that much tougher. We are forming something together beyond a single issue, a deeper sense that we are building a movement together that can move from one issue to another, linked by our goals of democracy and economic justice. I commit to you that I will fight just as hard, shoulder to shoulder with you to build this movement," he said. 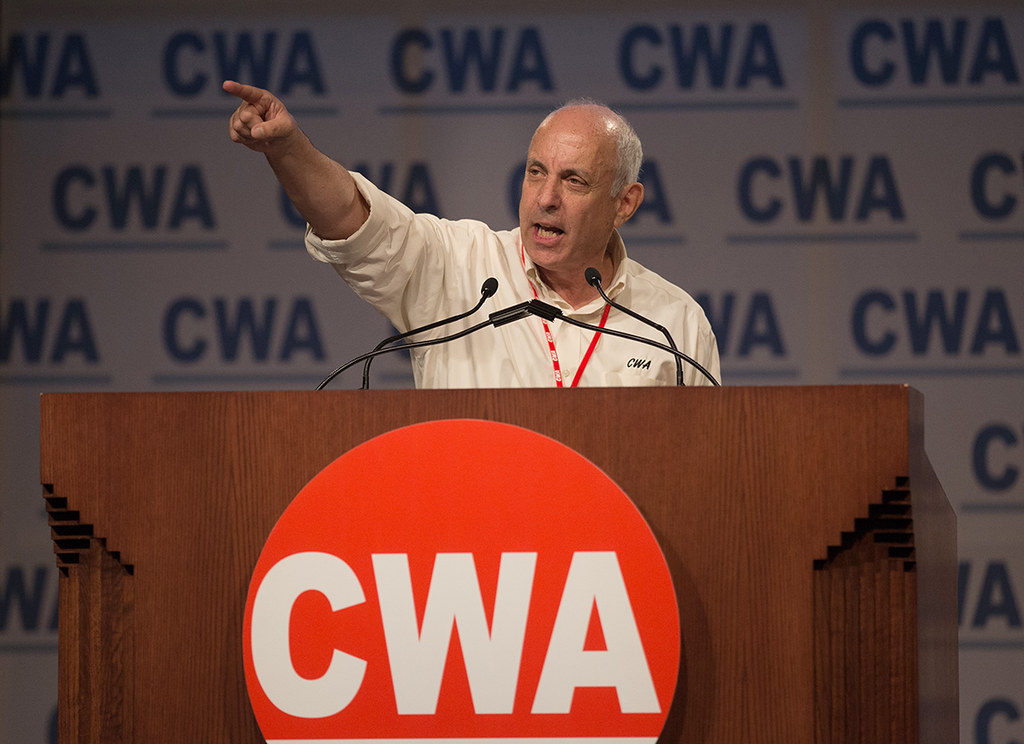 Cohen administered the oath of office to new CWA President Chris Shelton, who praised Cohen as a "visionary, transformational" leader.

Cohen was presented with the President's Award, CWA's highest honor for organizing, also known as the "Hat Award," in honor of CWA founding President Joe Beirne. In presenting the award, Shelton said the honor was long overdue and was a tribute not only to the 40,000 New Jersey public workers that Cohen brought into CWA in 1981 but his decades of work to help workers gain organizing and bargaining rights and his never-ending commitment to building our union.

Delegates also adopted a resolution "honoring the leadership and determination of President Larry Cohen to fight 'One Day Longer, Each Day Stronger,' and also voted to designate red as CWA's official color, both in honor of Cohen and in memory of Local 1103 Steward Gerry Horgan who was killed on a picket line in 1989.

Those activists, volunteers, local organizers and CWA organizers who stuck with the fight for more than 17 years were honored with the President's Award, CWA's highest honor for organizing.

"My dream, as Larry has said, is 'One Day Longer Each Day Stronger,'" said Richard Shaughnessy of Miami, who also is a member of the bargaining committee. "We won. I can officially say that I am a proud graduate of the Sandy Rusher/Larry Cohen School of Organizing."

Other leaders, like Rosemary Capasso, Dallas-Fort Worth, faced the reality that she might be fired for her union activities and lose her retirement benefits. She decided that no matter what she might lose, she wouldn't give up the fight. Annette Rocco of Hartford, Conn., had her job contracted out, but she stuck with the fight and turned out all the eligible furloughed voters at her airport.

CWA Organizing Director Sandy Rusher reported that since the last convention in 2013, more than 19,000 new members have joined our union through organizing and affiliations.

Locals that organized at least 100 workers also were recognized:

Delegates to the CWA 75th Convention adopted several resolutions that committed to vigorously fighting the assault on public workers' bargaining rights, working with coalition partners to counter the outsized influence of the 1 percent, and voicing CWAers' determination to "dig deeper and fight harder, longer and smarter to continue to organize the unorganized." Other resolutions addressed the reality of racial inequality in our country, called for women's voices to be heard and respected, and called for an end to discrimination and support for equal access for LGBTQ persons.

Read all the resolutions here. 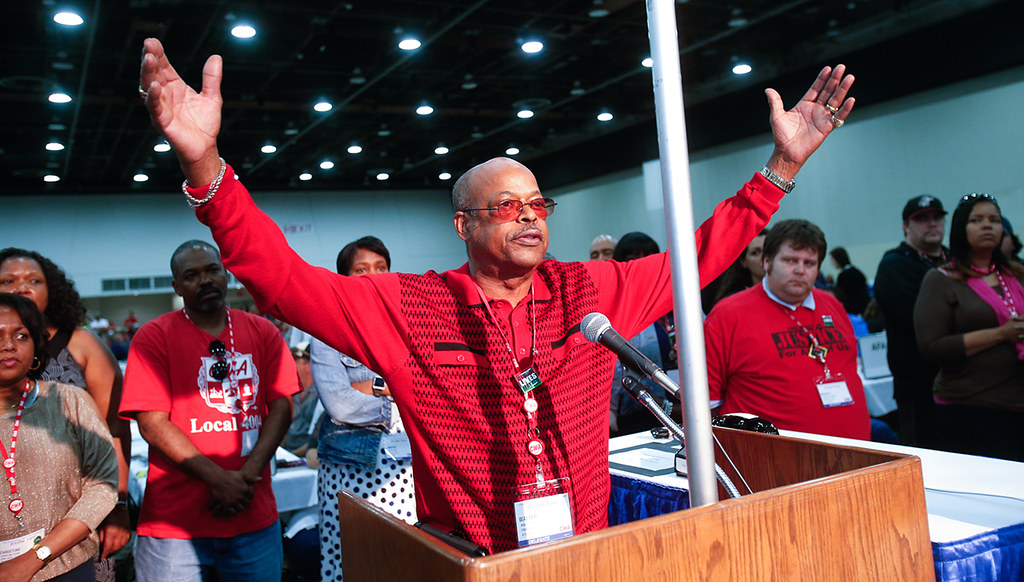 Delegates speak to resolutions on civil rights, public worker bargaining rights, fighting back against the one percent and other topics.

Delegates to the CWA 75th convention adopted policies, reports and actions to keep our union moving forward. See more photos here. The site will be updated as more photos are received from the field, so check back often. 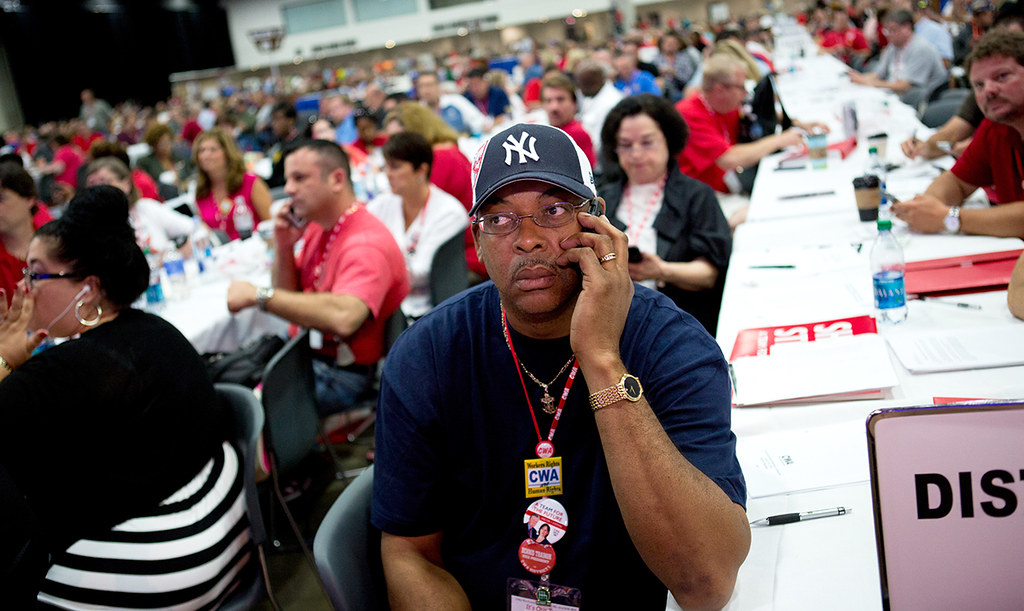 During the convention, delegates called their representatives, urging them to vote no on Fast Track legislation that is scheduled for House vote on Friday. Delegates made more than 1,500 calls.

More scenes from the convention. 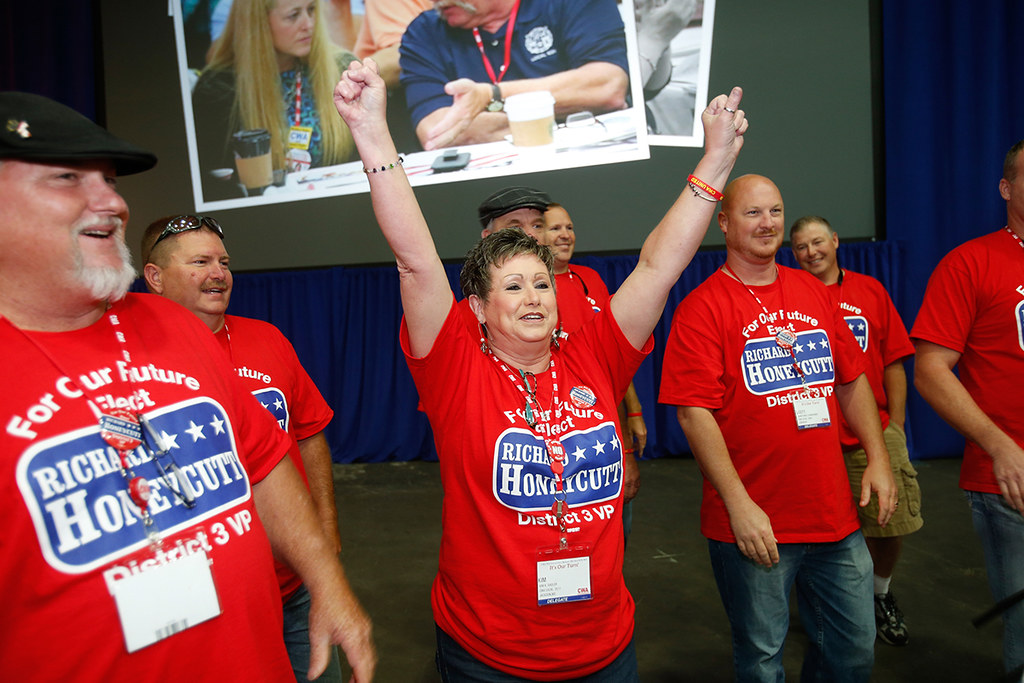 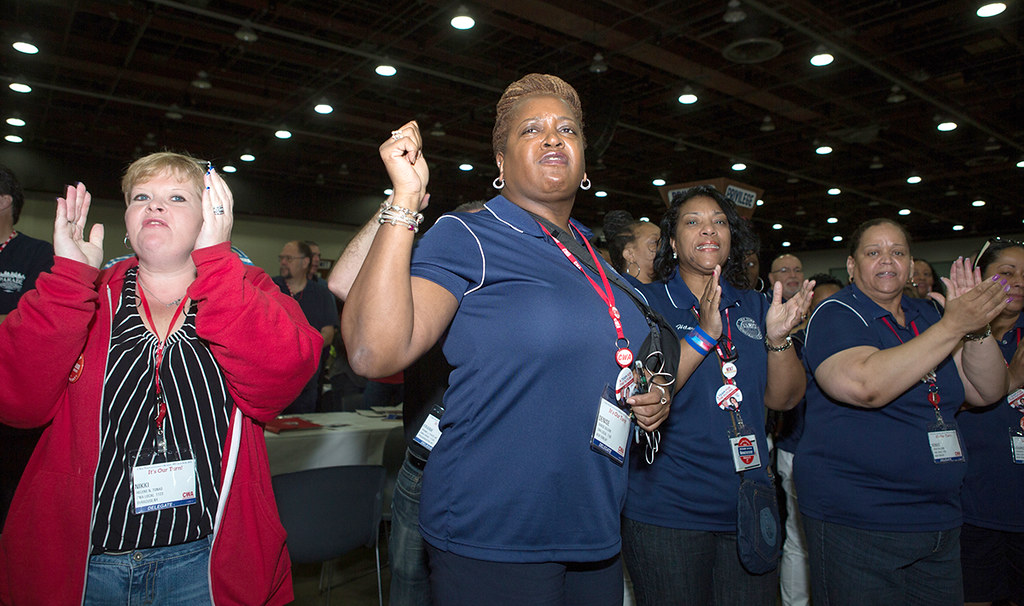 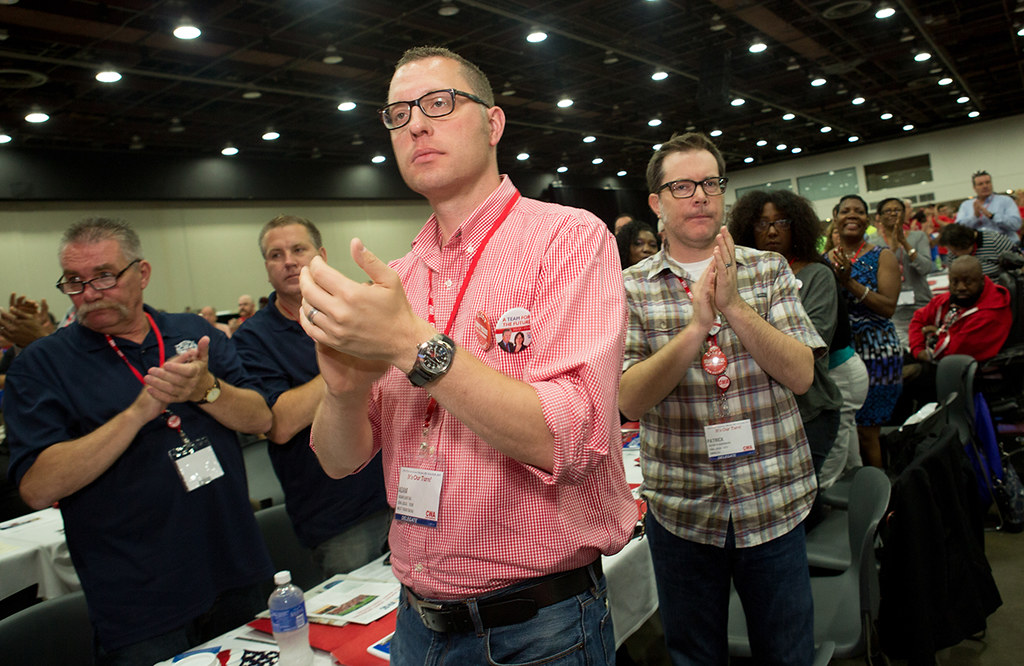 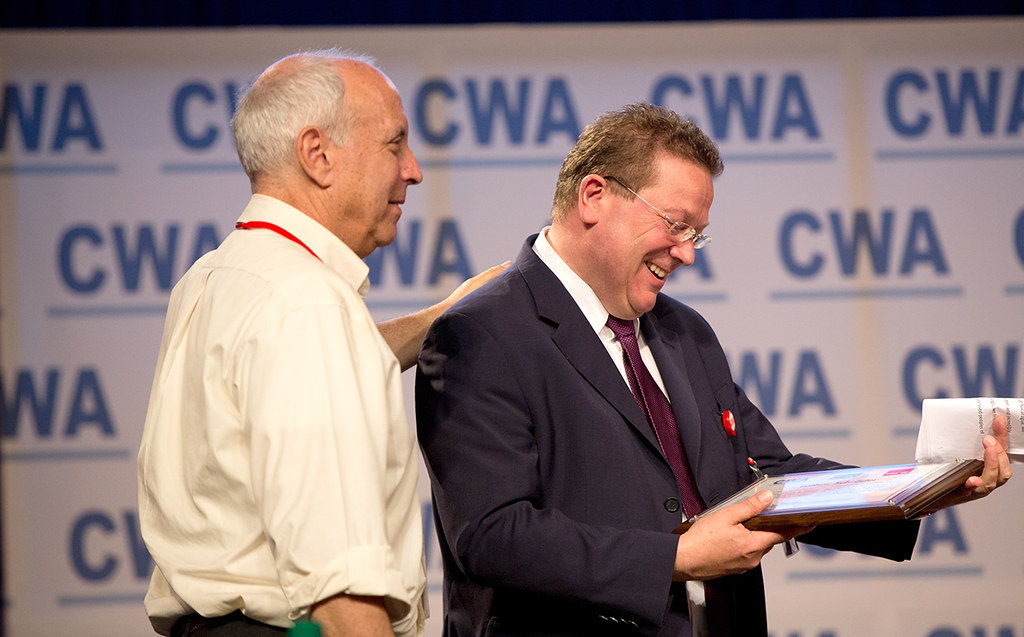 Lothar Schröder, a leader of ver.di, the union representing German telecom workers, told delegates that ver.di members will continue to stand strong and support the fight by T-Mobile US workers for a CWA voice. He was presented with a plaque in appreciation of ver.di's support for TU.

Congratulations to Local 4202, President Sorey and the members who worked on this campaign.

In California, 58 former Cricket employees (now AT&T Mobility) have a CWA voice and bargaining rights. Activists and leaders from Locals 9333, 9408, 9509 and 9511 and organizers Pia Basudev and Louie Rocha worked on the campaign.

CWAers in NJ: 'We Will Fight And We Will Win'

The State Supreme Court, in a 5-2 ruling on Tuesday, overturned a lower-court decision that said Christie broke the law when he cut $1.57 billion from a promised payment and ordered his administration to work with the legislature to remedy the shortfall.

"We hoped the Court would uphold the basic tenet that the law is what it says it is. But the fact that they didn't rule for us is merely another obstacle that we will overcome," said CWA's New Jersey director Hetty Rosenstein. "Governor Christie broke his word, and whatever shred of credibility he had left when he refused to fund the pension. Our union will never permit the destruction of the pension system and, as such, the destruction of New Jersey's economy. If it is unconstitutional to meet the pension obligation, perhaps we will have to change the constitution. But one thing I know is this: we will fight, and we will win."

In 2011, Christie and state lawmakers passed a law raising workers' pension contributions, bumping up the age of retirement, and reducing cost-of-living adjustments. In return, the state promised to start making bigger contributions into the pension system to make up for a history of scarce payments. But while workers held up their end of the bargain, Christie reneged and slashed the required payment to fill a gap in his troubled budget.

Despite the lower court's ruling earlier this year, Christie continued to ignore the 2011 law. Unions sued, charging that the governor has a constitutionally protected contractual obligation to increase the state's payments.

This week the State Supreme Court didn't necessarily agree with Christie's backtracking, but rather conveyed an unwillingness to intervene.

"That the state must get its financial house in order is plain," Justice Jaynee LaVecchia, who was appointed by Republican Gov. Christie Whitman. "The need is compelling in respect of the state's ability to honor its compensation commitment to retired employees. But the court cannot resolve that need in place of the political branches. They will have to deal with one another to forge a solution to the tenuous financial status of New Jersey's pension funding in a way that comports with the strictures of our Constitution."