The Joint Negotiating Committee of AFA-CWA flight attendants has called for a National Day of Action next Thursday, July 16, to highlight the difficulties that they are facing bargaining a contract with United Airlines.

“The bottom line problem is the company’s unwillingness to put the required economic resources into a Flight Attendant Contract,” AFA-CWA President Sara Nelson said. “That is unacceptable and we are going to stand up to make it clear to the company that we expect much more, especially now as United’s profits are soaring.”

United management must understand that Flight Attendants are united for a fair contract. They are preparing for a System-wide Day of Action on July 16th in all the airline’s 16 base locations, including at Washington Dulles, where they will be joined by CWA President Chris Shelton.

Other locations include London, Frankfurt, Boston, New York, Newark, NJ, Chicago, San Francisco, Denver, Seattle, Las Vegas, Los Angeles, Honolulu, Tokyo, Hong Kong and Guam. The workers have targeted July 23rd as the date for an agreement but it will take a very serious turn around at the bargaining table to get there. Flight Attendants will be joined at the National Day of Action by other CWA Locals as well as allies from other labor unions and progressive groups. Details for action are listed at ourcontract.org.

United has failed to reach a unified labor contract with its 24,000 flight attendants despite a boast by United Chief Executive Jeff Smisek following the airline’s October 2010 merger with Continental that he would complete joint contracts with all workers by the end of 2011. Meanwhile, United Airlines is making record profits and its 2015 income will be more than five times higher than in 2013; operating profit in 2015-2017 is expected to be $5 billion or more in each year; United has $7.0 Billion in cash on its balance sheet and its stock price has jumped 162% since negotiations began; Smisek’s pay is up 32% and other top executives and shareholders are also cashing in.

United showed it is tone deaf by announcing that it is investing $100 million in a Brazilian airline while refusing to invest in its own workers who spend more time with passengers than anyone else.

Flight Attendants, standing shoulder-to-shoulder, will demonstrate their solidarity for a joint Contract that recognizes and respects what each worker has brought to the airline since its United/Continental merger and the hard work all they do every day to make United Airlines fly safe. 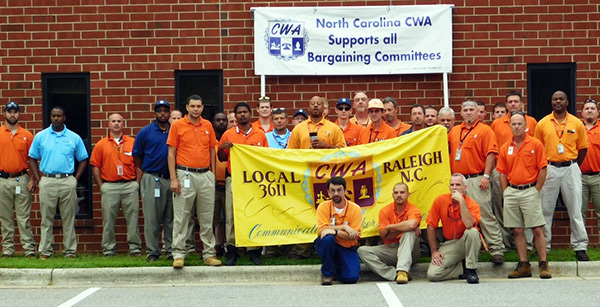 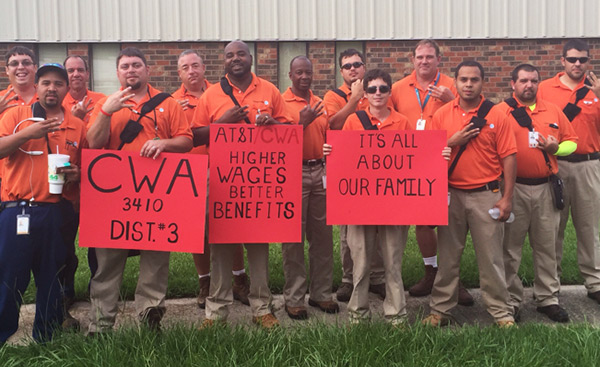 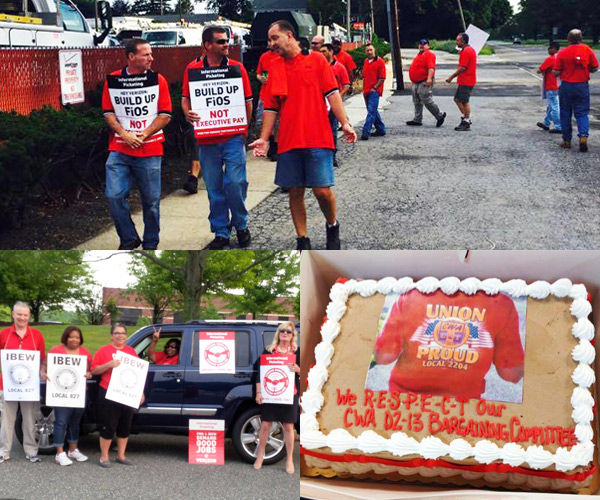 And the District 2-13 bargaining reports here.

In New Jersey, CWA Local 1014 marched on Camden City Hall to urge council members not to privatize its police dispatch services and remove 25 dispatchers from the city’s payroll.

"If they privatize these jobs, who is next? You're next," Staff Representative Jim McAsey  told the crowd on Tuesday.  "We have to draw a line in the sand."

The city is currently reviewing two bids from outside companies, but is still weeks away from making a recommendation.  Read more here.

CWAers in Camden fight back against privatization of 911 dispatchers, and stand up for middle class jobs and public safety.

Responding to growing public pressure and local government initiatives, T-Mobile US announced last week that it would adopt a paid parental leave program. The company also said it would end an oppressive policy that required call center workers to be on the phone 96.5 percent of their work time, leaving them with virtually no time for follow up on customer issues or to make changes in customers’ accounts as needed.

This is great news for workers who often must struggle to balance their families and careers. It comes as workers at T-Mobile and a coalition of community supporters in cities like Albuquerque, N.M., step up efforts to restore a fair workweek.

Members of TU, the union of T-Mobile workers, CWA, the Center for Popular Democracy, OLÉ and other coalition partners have been raising concerns about unfair scheduling and other issues for workers at T-Mobile and other employers. Workers want a voice in the decisions that affect them in their workplace—not just the ones that the company selectively picks and chooses. That’s why T-Mobile workers are joining TU.

T-Mobile’s initial scheduling changes were made just as the Albuquerque City Council was moving forward to consider an ordinance to help workers win predictable scheduling, full-time opportunities and earned sick days. The Albuquerque coalition hosted a town hall meeting on irregular scheduling, council members pledged to support their fight for a fair workweek.

A recent National Labor Relations Board (NLRB) decision found T-Mobile guilty of engaging in illegal employment policies that prevented workers from even talking to each other about problems on the job. The judge ordered the company to rescind those policies and inform all 46,000 employees about the verdict.

Parental leave is a good first step toward helping workers balance their career and family responsibilities. But workers want real bargaining rights and the right to fairly choose union representation. That’s what T-Mobile must realize.

Stay connected with Larry Cohen and his democracy and movement building work going forward. Check out his website,  eachdaystronger.org, and sign up for occasional emails from Larry here.