Members of The Newspaper Guild of Greater Philadelphia, CWA Local 38010, rallied for a fair contract outside the Philadelphia Inquirer and the Philadelphia Daily News last week. Their solidarity paid off with a tentative two-year agreement that has rejected management demands for health care cost shifting and furloughs, and restores "added responsibility" pay for weekend work, provides for increased severance pay and the first-ever wage scale for Philly.com employees.

The workers will vote next week, July 7-8, on the new contract. 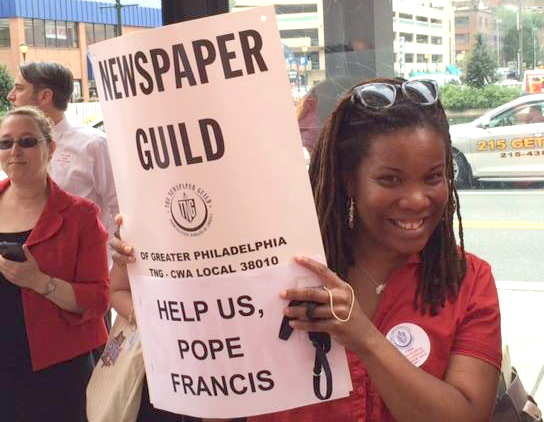 Journalists and staff at the Philadelphia Inquirer, the Daily News and Philly.com pushed back hard against demands that could have quadrupled their health care costs and stripped their seniority rights. More than 300 members and allies came out for an informational picket last Thursday ahead of the expiration of their contract.

Joining TNG-CWA members at the rally, Bernie Lunzer, President of the NewsGuild, said, "They promised health care, and you deserve your health care paid for. We're going to fight for that, and we're going to fight the hold back on the seniority, which is a crazy request. It just is extreme." 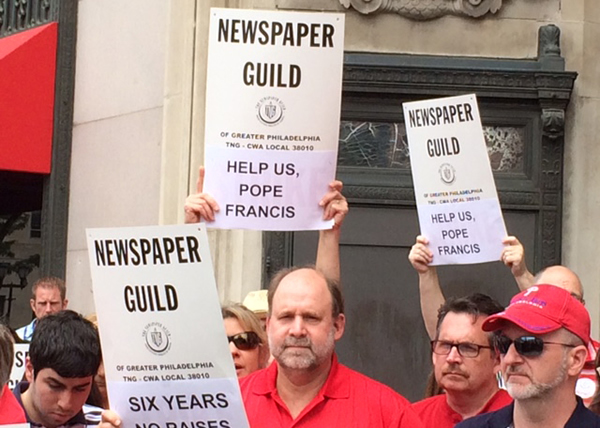 Labor union allies joined Guild members at the picket, which drew up to 400 people. "You are not alone, we will fight and we will fight with you," said Jerry Jordan of the Philadelphia Federation of Teachers.

With just a day until contract expiration, TNG-CWA negotiators, working with a federal mediator, reached a tentative agreement.

Verizon members in D1 and D2-13 are mobilizing as contract negotiations continue. Keep up with the latest here. 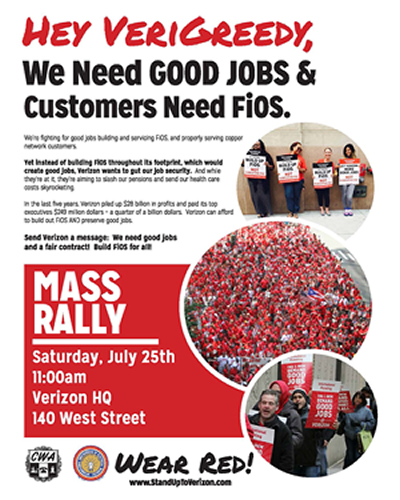 As negotiations continued, CWA's bargaining team called on CWA AT&T members in D3 to "show our solidarity in order to remind the company that it's our turn."

Below is a list of Senators who voted wrong:

In January, Rice wrote a letter to President Barack Obama saying she opposed fast-track trade authority because it would send American jobs offshore and push down wages. In April, she said it again. But then she flip-flopped and voted against U.S. workers, jobs and communities by supporting Fast Track.

Read CWA's Statement on the Ruling by the Supreme Court of the United States in Obergefell v. Hodges.

"Last week the Supreme Court issued a historic ruling in the case of Obergefell v. Hodges, permitting same-sex marriage in all 50 states.

LGBTQ activists and their allies fought for years to gain the right for LGTBQ couples to marry. These couples and families were not asking for special rights, or different rights. They were simply asking for the same rights afforded to all other couples.

Today, the Supreme Court enshrined that right. Same-sex couples are now treated equally under the law and CWA is proud to stand behind our brothers and sisters who worked so hard to achieve equality.

As a union, CWA is proud to join this fight for equal rights in the workplace and in society. Today, we can finally celebrate, knowing that we are one step closer to achieving equality and opportunity for all." 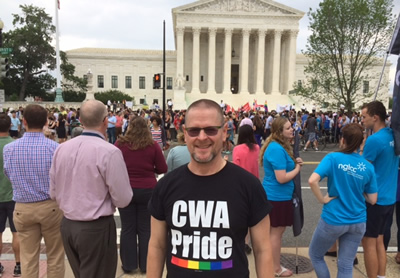 CWAer Joe McCue was at the U.S. Supreme Court as the court ruled that same-sex couples in all 50 states had the right to marry.

The Fight to Restore Voting Rights

Last week's rally in Roanoke, Va., marked the second anniversary of the Supreme Court's decision that gutted the Voting Rights Act. Hundreds of activists from these Democracy Initiative partners turned out:

Watch some of the media coverage here.

The Obama administration's proposed rules to update the requirements for determining workers' overtime pay are an important first step toward improving the lives of millions of working families. When finalized, the new rules will mean a pay increase for at least 5 million workers who now work more than 40 hours a week but are denied overtime pay.

Currently under the Fair Labor Standards Act, non-hourly workers who earn less than $23,660 a year are paid a time and a half if they work more than 40 hours per week. This limit is way out of date; in 1975, 62 percent of the workforce qualified for overtime but today it's fewer than 12 percent. The new threshold would be $50,440 a year or about $970 a week.

In addition, too many workers are subject to employers' efforts to intentionally misclassify them as "professionals" to deprive them of the overtime pay they have earned, or use other means to force workers to put in extra hours without compensation.

CWA will continue to advocate for full and effective bargaining rights for workers as the most effective way for working families to improve incomes and their standard of living.

"Today's decision by the U.S. Supreme Court to hear Friedrichs vs. California Teachers Association shows how extreme the assault on workers' bargaining rights has become. The Friedrichs case is an attack on public sector workers, financed by anti-worker and corporate education supporters. These groups have been working for years to stifle the voices of teachers and other public servants in the workplace and strip them of their rights.

Labor law requires that a union must represent all workers in the bargaining unit. That's why the "fair share" system makes sense. Workers who choose not to join the union that the majority has approved still benefit from union representation. Under fair share, these workers who choose not to join may be required to pay their fair share of the costs of the representation from which they benefit. Friedrichs seeks to encourage free-riding by outlawing the fair share system for the public sector workforce, thereby making union representation more difficult to sustain.

The public sector workforce is predominantly female and benefits from the ability to bargain collectively. The wealthy special interests behind this lawsuit want to make it harder for public workers to sustain union representation.

We hope that the Supreme Court sees through this attack on workers' rights and deals with the issues in the Friedrichs case fairly and promptly."

The 71 AT&T Mobility (formerly Alltel) retail store employees in South Carolina now have CWA representation, with a majority indicating that they want a CWA voice in the workplace and bargaining rights. CWA Local 3716 President Jason LaPorte and Local 3719 President Phillip Williams played a big role in the organizing effort.