Tell Your Congress Member: No Fast Track for the TPP!

Around the country, CWA members are calling Members of Congress to tell them to reject Fast Track authority for the proposed Trans-Pacific Partnership trade deal that will wipe out millions of U.S. manufacturing and service-sector jobs.

The number to call is 1-855-980-2256. Enter your zip code when prompted and you will be connected with your representative's office. 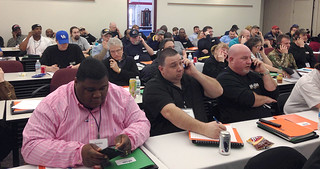 IUE-CWA members in Dayton, OH, calling members of Congress to tell them to reject Fast Track Authority for the Trans-Pacific Partnership trade deal. 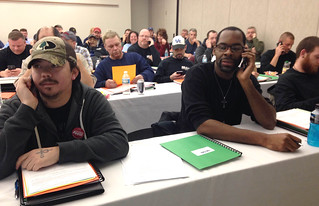 When a staff member answers, deliver a message that's something like this:

I'm a constituent and I've had enough of bad trade deals negotiated in secret like the Trans-Pacific Partnership. Congress needs to read the deal and not vote to Fast Track it before even knowing what's in it. I urge you to vote no on Fast Track authority for the TPP.

In every CWA district and sector, activists are generating calls and writing letters to members of Congress to stop Fast Track and the TPP. The TPP, a massive trade deal that has been negotiated in secret by the U.S. and 11 other countries, makes it easier to offshore manufacturing and service industry jobs. TPP is specifically designed to guarantee and protect future profits for multinational corporations. It lets corporations sue a country over any law, like raising the minimum wage or protecting the public health, if it affects profits. TPP also would make "Buy America" laws illegal.

The Obama administration – heeding the siren calls of corporate lobbyists – is asking Congress for a blank check. Fast Track authority provides special rules and supersedes the normal Congressional process by speeding everything up, not allowing amendments, requiring only a majority vote in the Senate instead of the usual supermajority of 60-plus votes.

The Business Roundtable, the U.S. Chamber of Commerce and the Republican leadership in the House and Senate that spent the past six years trying to thwart the president's economic agenda suddenly want to work with the administration on this deal. Meanwhile, a majority of the Congressional Democratic Caucus, normally allies of the president in fighting for the middle class, is overwhelmingly against Fast Track for the TPP, joined by some of their Republican colleagues. 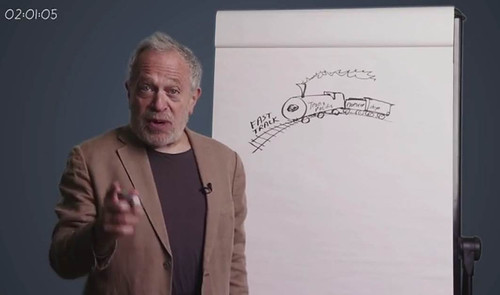 AFA-CWA Flight Attendants are calling members of Congress this week to point out that Fast Track authority would apply to as many trade agreements as can be negotiated by this White House or the next one.

Go to this link for background information.

AFA-CWA International President Sara Nelson talks about the effects of such a trade deal in this video. 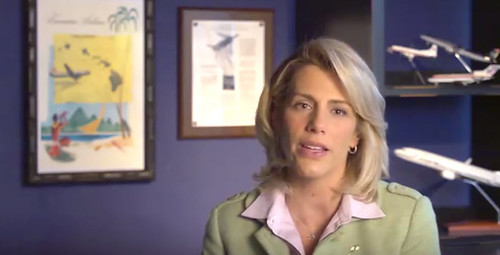 No Fast Track-No TPP Messages are on the Air

Allies in the fight to stop Fast Track authority for the Trans-Pacific Partnership are featured in audio news releases that are being broadcast in Congressional districts and around the country.

In this audio message, Kevin Kearns, President of the U.S. Business & Industry Council, is calling on members of Congress to do their job and fully review the TPP.

Leaders of the BlueGreen Alliance, a broad coalition fighting for trade fairness, transparency and the protection of labor and environmental standards, told reporters that U.S. Trade Representative Michael Froman has said nothing new to Congress about Fast Track authority or the job-killing, environment-destroying Trans-Pacific Partnership.

"On fast track itself, that means an up-or-down vote in Congress with no amendment," CWA President Larry Cohen said. "What is the U.S. Trade Representative afraid of? What is the president afraid of?"

"Why are we throwing in with Boehner Trade?" he continued. "Right now, it is well documented that an overwhelming majority of the House Democratic Caucus, about 150 members, opposes the president on Fast Track. Is he going to roll his own party on Fast Track and unite with Boehner on Boehner Trade? That is what this is about right now. There's not one good argument for doing it."

"For us, trade is not just a matter of numbers; it's a matter of lives and jobs and lost opportunities," Gerard said. "If the TPP looks and smells like the Korea trade deal, or NAFTA trade deal, or the preferential trade status that we gave China, then history will repeat itself and we'll continue to lose jobs."

Rep. Mark Pocan (D-WS) said he had seen in Wisconsin the effects that such job losses could have on communities. For that reason, he said, his colleagues in Congress should not sidestep their constitutional duty to vigorously examine the TPP, which the TPA that the administration is asking for would not allow.

"We join the vast majority of House Democrats in the 113th Congress who announced opposition to Fast Track Trade Promotion Authority," the members wrote in one letter to Obama. "Nearly every ranking member and large blocs of the New Democrat Coalition, Blue Dogs, Congressional Black Caucus and Congressional Hispanic Caucus were united in opposing Fast Track and demanding a replacement to that Nixon-era procedure that Congress has refused to authorize but for five of the past twenty years."

President Obama made a pitch for their support in his State of the Union address, asking that they grant him trade promotion authority. The problem is that such a bill, which would make it easier for the administration to get trade deals passed in Congress, is asking lawmakers to abdicate their Constitutional responsibility to amend agreements and require them to put the finalized agreement to a simple up-or-down vote.

"[W]e believe this legislation lacked sufficient guarantees to ensure Congress' voice in shaping the substance of international trade agreements negotiated by the Administration," another group of freshman Democratic legislators wrote. "Our concern is that previous versions of TPA legislation did not ensure sufficient input of our constituents' concerns about labor, environmental, and human rights protections that must be essential in the trade deals you are currently negotiating."

At the U.S. Senate Finance Committee hearing on the proposed Trans-Pacific Partnership trade deal, ordinary citizens and activists stood up and voiced their concerns.

Froman had barely launched into his presentation to the U.S. Senate Finance Committee in the morning when a woman in the audience – holding aloft a sign that said "They Are Trading Away Our Future" – rose to speak. 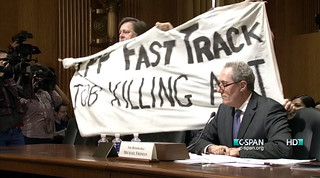 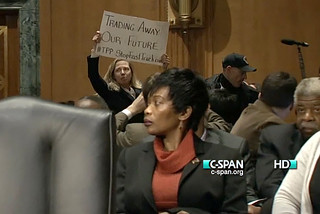 "Ambassador Froman, you're not telling the American people the truth," she said. "We know the Trans-Pacific Partnership has been negotiated in secret. You're trying to rush it through Congress with Fast Track because it is secret. You're going to offshore our jobs and lower our wages."

Senate Finance Committee Chair Orin Hatch (R-UT) earlier lauded Froman and even, strangely, exhorted him to fight for TPA before completing the TPP negotiations. "Let's have order," a worried Hatch now said as the woman spoke. "Remove this person."

Others took up her cry. A man who rose to unfurl a banner saying "TPP Fast Track a Job Killing Act" said as security wrestled him too out of the hearing room: "We believe in democracy, not secrecy."

"We say stop Fast Track; no TPP," one person said.

Sitting quietly behind Froman, over his right shoulder, a person held up a sign saying "Fast Track Constitutional Train Wreck." 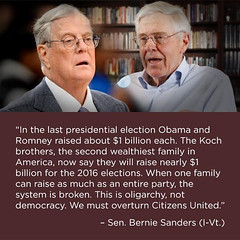 This week, Charles and David Koch announced that they will spend $889 million – that's double what they spent in 2012 – in the 2016 elections.

How much is $889 million? Sam Stein of The Huffington Post says it comes out to nearly $1.4 million PER DAY from now till Election Day 2016.

Citizens United has made this obscene spending possible, because the court struck down limits on independent political spending and allowed big money to take over our elections and our democracy. CWA and allies have been fighting back, supporting legislation that makes it clear that money isn't speech, calling on Congress to set limits on campaign spending and other reforms.

As Promised, GOP Introduce Laws to Gut the NLRB and Labor Rights for American Workers

The so-called 'NLRB Reform Act' would guarantee a perpetual stalemate on the National Labor Relations Board because Sens. Lamar Alexander and Mitch McConnell propose to add a sixth member to it. And, in the House, Rep. Steve King (R-IA) is introducing a federal right-to-work bill to "free" workers from paying union dues.

These are not new. King's proposal is a barely warmed over version of a bill he introduced nearly two years ago. His aim is to undermine collective bargaining rights for workers. Last fall, Sen. Alexander of Tennessee and Senate Majority Leader McConnell raised the curtain on their proposal to cripple one of the last remaining institution set up to fight for workers.

In plain language on the government's own website about the law that set up the board:

"Congress enacted the National Labor Relations Act ("NLRA") in 1935 to protect the rights of employees and employers, 'to encourage collective bargaining' and to curtail certain private sector labor and management practices, which can harm the general welfare of workers, businesses and the U.S. economy."

Dysfunctional U.S. Senate rules and recalcitrant Republican senators kept the NLRB from having a full slate of members for a decade. Then, with the extraordinary efforts of thousands of CWA activists and the Fix the Senate Now coalition, the movement succeeded in changing the rules and the Senate confirmed a full five-member board.

The Chicago Reader editorial employees have voted 19-0 to have a voice in the workplace as a unit of Local 34071 in the Chicago Newspaper Guild. The new unit will now elect officers and select a bargaining team to negotiate a contract with Wrapports LLC, owner of the Reader and the Chicago Sun-Times.

The idea of joining a union had been raised occasionally over the years at the 43-year-old Reader without gaining any traction. The vote took place on Jan. 16. Serious discussions among the staff began after the paper was purchased by Wrapports in 2012 and moved from the building it once owned at 11 E. Illinois into the Sun-Times Media suite at 350 N. Orleans.

Some of the Sun-Times editorial employees they share space with already belong to the NewsGuild. One Reader writer said employees hope that, in difficult times for the newspaper industry, Guild affiliation will give them a louder voice in the much larger company for which they now work.

"We appreciate that staff exercised their right to vote and acknowledge the decision," Wrapports CEO Tim Knight wrote in a statement.