There is good reason some have called the proposed Trans-Pacific Partnership trade deal "NAFTA on steroids."

A new report by the AFL-CIO details the findings of an October 2014 delegation of U.S. labor and Latino community leaders to Honduras to learn firsthand the impact of America's failed trade policies. 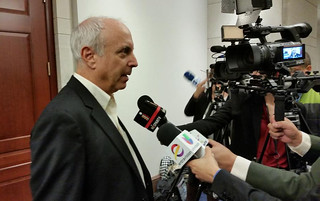 Cohen, echoing warnings of other immigrant leaders, said passage of the TPP would accelerate the move of additional jobs from Mexico and Central American countries to cheaper Asian markets – and incentivize a new migration to the U.S. in the process. The report – called Trade, Violence and Migration: The Broken Promises to Honduran Workers – is the latest in a series of events that have brought the issues of comprehensive immigration reform and trade policy more closely together.

"I came away from that trip, as I think most of us on that trip did, really gripped by the obligation to make some difference, if nothing else to sound an alarm like Paul Revere: No more trade deals like this," Cohen said. "Where...the corporate world, sadly led by multi nationals in the U.S., can sue over the top of governments, sue the governments themselves for millions and, in some cases, for billions of dollars. This is not what democracy looks like and I came back committed to fight for what Democracy does look like." 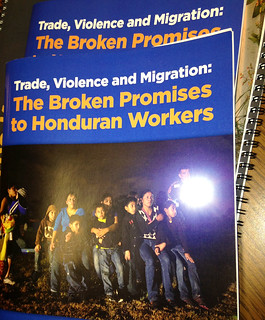 The North American Free Trade Agreement (NAFTA) accelerated the trend of devaluing U.S.-based jobs and shipping them elsewhere, in that case across the southern border to Mexico. CAFTA soon followed, with catastrophic results. Whatever gains those countries made were offset by other trade-induced losses within their economies, not to talk of the destabilizing effects on their cultures and societies.

Vietnam, Malaysia, Brunei and the other even lower-wage countries seeking to join the TPP want the preferences currently enjoyed by NAFTA and CAFTA nations.

To read more on the TPP, go to: stopthetpp.org.

The Trans-Pacific Partnership (TPP) threatens to topple the laws and regulations that protect the food we eat, air we breathe and jobs we work. Under the proposed deal, multinational companies just have to demonstrate a threat to their "expected future profits" from laws and regulations in order to bypass our court systems and directly sue national governments in private international tribunals that are accountable to no one. It'll enable big business to challenge increases in the minimum wage, on-the-job protections, environmental regulations, consumer safety laws and more. This corporate power, taken from sovereign nations, is called investor-state dispute settlement, or ISDS. 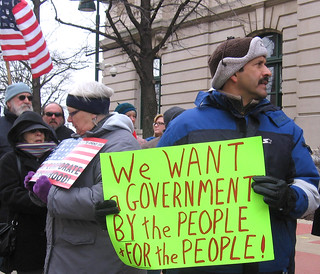 The Supreme Court's disastrous 2010 Citizens United decision, which granted corporations the same rights as people and opened the floodgates to unchecked corporate political spending, has a lot to do with how we got here.

For instance, members of the Industry Trade Advisory Committee on Intellectual Property Rights are among a handful of people who can actually read and comment on the draft text of the trade agreement. Members of Congress, journalists, labor representatives, environmentalists and others have not been allowed to see the 2,000-plus-page agreement. Membership in the committee is coveted and partly based on recommendations made from members of Congress. Coincidentally, it is entirely comprised of business and industry groups who are top political donors. A MapLight analysis found that the organizations represented on ITAC gave nearly $24 million to lawmakers between 2003 and 2012. They've also given a combined $758,295 to lawmakers sponsoring Fast Track legislation, which would speed trade deals like the TPP through Congress without debate or any opportunities for amendments.

In summary: Corporations that can directly benefit from the TPP are the exact same businesses that can now contribute unlimited sums of money thanks to Citizens United. And they've used those political war chests to lobby for a trade deal that will help them make even more money and give them new powers.

The fifth anniversary of that awful decision is quickly approaching. What will you be doing? Join CWA and allies to rally against big money corrupting our politics. All in all, we have organized over 130 events nationwide surrounding the anniversary. Hundreds of activists will be rallying together. Will you be there? If you can go, www.moneyout-votersin.org has a map of events.

If you can't go, sign on as a citizen co-sponsor of the Democracy for All amendment, a constitutional amendment to get money out of politics. 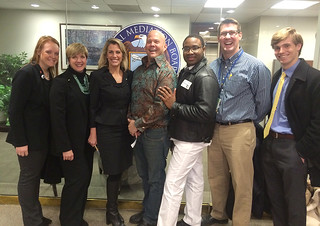 Silver Airways Flight Attendants celebrate winning AFA-CWA representation with the union's staff and officers at the National Mediation Board.

Silver Airways, with headquarters in Fort Lauderdale, Florida, is a U.S. airline in an alliance partnership with United. The world's largest Flight Attendant union, AFA-CWA is comprised of Flight Attendants working at mainline, regional, low cost, niche and charter airlines.

Nelson said the union looks forward to working with Silver Flight Attendants, who are on the path to achieving the protections they deserve.

"Together, we'll continue to improve the working environments and safety standards for all of aviation's first responders. At AFA, every Flight Attendant's voice counts. As we grow in numbers, our voice becomes even stronger and in unity, our messages have even greater impact," she said.

Strike Strong as Cold Sets In

As mediation continues in Washington, D.C., this week, workers and their supporters stood strong on picket lines in solidarity with their bargaining teams working for a fair contract.

Today is day 91 and workers are prepared to wait for as long as it takes. They walked out last October after FairPoint Communications unilaterally declared an impasse in negotiations and enforced its final offer. That deal included freezing pensions, cutting retiree health care, raising health care costs for active workers, implementing a two-tier wage plan with big pay cuts for new hires, and ending restrictions on subcontracting and outsourcing.

One day longer, one day stronger. 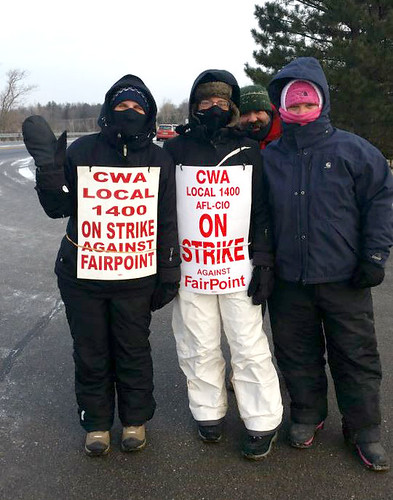 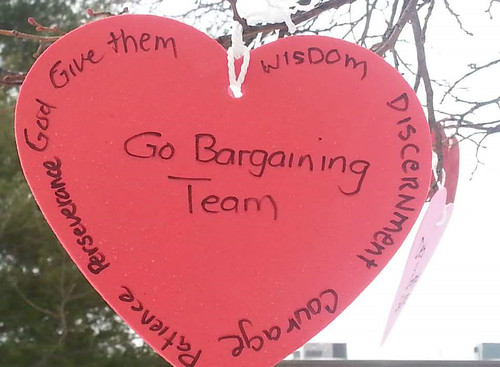 19 AT&T Retail Store workers in St. Thomas have now gained recognition to be represented by Local 3010.

Conducted under the AT&T card check agreement in late December, the victory means CWA now represents 100% of the retail stores workers in the USA, Puerto Rico and the U.S. Virgin Islands.

"After attending the Mobility Conference, our Local organizer, Lizbenet Vazquez, came back with the commitment of organizing the last store without union representation across the nation," Local 3010 President Luis Benitez said. 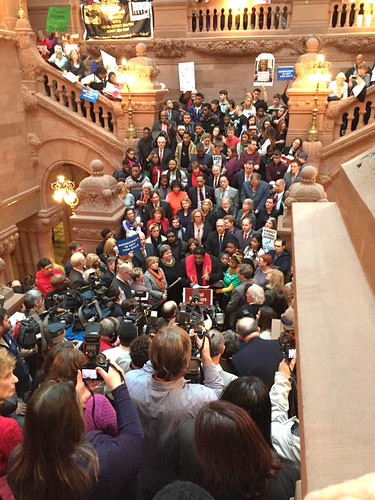 Rev. William Barber's Moral Monday protest traveled to New York this week to spotlight Gov. Andrew Cuomo's attack on teachers. "And using your political power, governor to settle scores, just because you are mad that somebody criticized you, rather than ensuring the promises of our constitution" Barber said. CWA activists joined hundreds at the rally, which the NAACP, AFT, Alliance for Quality Education, Make The Road NY, NYCC, students, parents and more.

Join us tonight for the CWA town hall call, starting at 7:30 pm ET. The call will last half an hour.

Tonight, we'll hear from Sister Simone Campbell, the leader of Nuns on the Bus and the Catholic social justice group NETWORK. The sisters are great allies in the fight against fast track and the Trans-Pacific Partnership. We'll also hear from Rep. Daniel Kildee, who will talk about what has happened to workers, jobs and the community of Flint, Mich., following two decades of bad trade deals.

CWA President Cohen will follow up with a status report on fast track and TPP.

If you haven't registered, find out how to listen online at www.cwa-union.org/cwacall.