As the Obama administration works to secure Fast Track authority for its trade deal that critics fear will devastate American jobs, CWA members and activists in every district and sector have been generating calls and writing letters to members of Congress to stop Fast Track and the Trans-Pacific Partnership trade deal.

The TPP, a massive trade deal that is being negotiated in secret by the U.S. and 11 other countries, makes it easier to offshore manufacturing and service industry jobs. TPP is specifically designed to guarantee and protect future profits for multinational corporations. It lets corporations sue a country over any law, like raising the minimum wage or protecting the public health, if it affects profits. TPP also would make "Buy American" laws illegal. 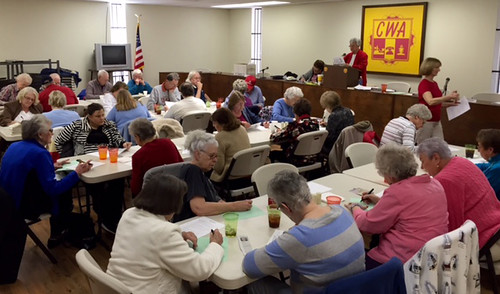 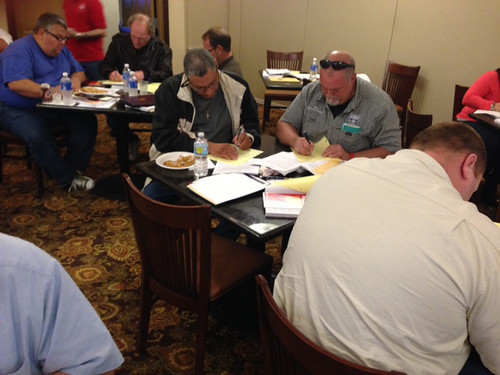 At new local officer training in Florida, CWAers took time out to call their members of Congress and write letters urging them to vote NO on Fast Track for the TPP. 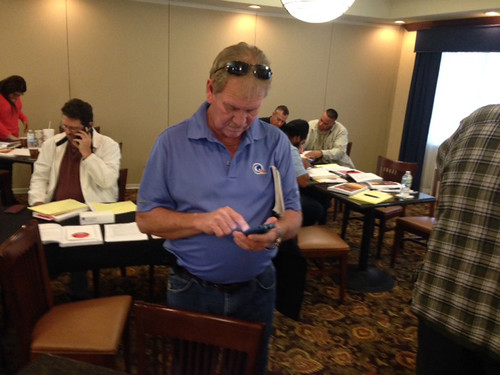 In a new report, the Economic Policy Institute said Japanese currency practices have cost the United States as many as 900,000 jobs.

But ask U.S. Trade Rep. Michael Froman how his team is handling notorious currency manipulators in the Trans-Pacific Partnership trade negotiations and he couldn't dance away fast enough from the question.

Don't ask me; currency is the responsibility of the Treasury Department, Froman began to say to Rep. Xavier Becerra (D-Calif.) during a House Ways and Means Committee hearing last week.

Froman came to Capitol Hill last week to urge lawmakers to grant the administration Fast Track authority for the trade deals it wants to negotiate. Fast Track supersedes the normal Congressional process and speeds everything up by not permitting amendments and requiring only a majority vote in the Senate instead of the usual supermajority of 60-plus votes.

"You've been talking about intellectual property," he said. "That's usually handled by the World Intellectual Property Organization. You've talked about issues of labor. That's usually handled by the International Labor Organization. So I'm hoping you're willing to talk about currency manipulation, which is one of the severest forms of imbalanced and unfair trade that a country can engage in."

Rules on currency manipulation won't be part of the massive TPP deal, the administration has told lawmakers. The massive and secret deal, specifically designed to guarantee and protect future profits for multinational corporations, makes it easier to offshore manufacturing and service industry jobs. Firms can sue a country over laws raising the minimum wage or protecting public health if it affects profits. "Buy American" laws suddenly become illegal.

Trading partners hold down the values of their currencies to make American-made goods more expensive and their goods less expensive. This leads to the U.S. importing more than it exports.

American trade negotiators, beholden to corporations that are the behind-the-scene drivers of American trade policies, are not burdened by such concerns. Corporations are willing to destroy whole industries and sectors of the U.S. economy for profits to be derived from the holy grail of cheap labor in countries like Vietnam and Brunei.

CWA President Larry Cohen met with about 25 members of the Congressional Progressive Caucus to talk strategy to defeat Fast Track authority for the Trans-Pacific Partnership and other trade deals.

The Obama administration is aligned with House Speaker John Boehner, Majority Leader Mitch McConnell, the Business Roundtable and the U.S. Chamber of Commerce in pushing for a trade deal that will devastate U.S. jobs, working families and communities.

Cohen laid down a set of principles on what 21st Century fair trade that benefits everyone, not just a handful of corporations, looks like:

"Trade policy, done correctly, is a win for the U.S. economy and U.S. workers," Cohen said. "It is critical that we work to stop the global race to the bottom that has been the result of old-style trade agreements. As a nation, we must strive to improve our standard of living and provide a better life for our children and grandchildren. We should not compromise on these values and reduce the quality of life for Americans through our trade policies."

For December alone, the trade deficit jumped 17 percent, the biggest one-month increase since July 2009. Exports fell while there was a record number of imports in consumer goods and non-petroleum related products.

These numbers sharply disprove the wishful thinking that supporters of the Trans-Pacific Partnership are pushing, that is, trade deals like TPP will create U.S. jobs.

A new CWA report, "The Trans-Pacific Partnership: the Latest in a Broken Record of Broken Promises" details the empty claims, particularly for workers and communities, that have been made about past trade deals and the TPP.

CWA and a coalition of more than 100 organizations – environmentalists, unions, people of faith, consumer groups, communities, students and more – are fighting to stop Fast Track authority for the TPP and other trade deals.

HuffPost Pushes Back on Presidential Criticism

The President told a meeting of House Democrats last week that they shouldn't learn about trade by reading the Huffington Post.

In response, the online publication has consolidated coverage of the TPP, including several posts by CWA President Larry Cohen, so that readers could see why this trade deal is a bad deal for working and middle class families.

The research director for Global Trade Watch, a CWA ally in the fight to stop Fast Track and the TPP, said the President is trying "to reckon with the difficult reality that his trade agenda directly conflicts with and undermines his stated middle class economics agenda."

No Fast Track-No TPP Messages are on the Air

Allies in the fight to stop Fast Track authority for the Trans-Pacific Partnership are featured in audio news releases that are being broadcast in congressional districts and around the country. 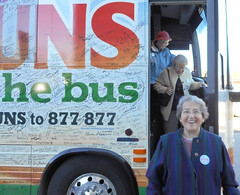 In this audio message, Sister Simone Campbell (pictured at right), the leader of Nuns on the Bus and NETWORK, the Catholic social justice organization, is calling on members of Congress to follow the faithful way forward and make sure that all voices in the Fast Track and TPP debate are heard.

One Day Longer, One Day Stronger!

Nearly 2,000 CWA and IBEW members across New England have held the line for 112 days. Let's help them continue to stand strong this winter, as they strike for good jobs and quality customer service in their communities. 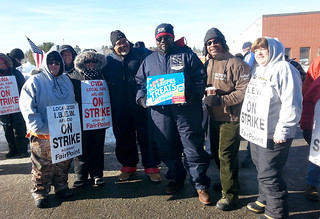 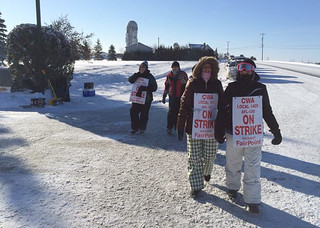 Contributing to the IBEW-CWA Solidarity Fund helps striking workers pay for necessities like health care, shelter, transportation, and fuel to heat their homes during these cold, snowy months.

Every little bit helps. While CWA members have a strike fund to fall back on, our IBEW brothers and sisters have nothing.

You can send a check to:

Or you can give online by clicking here.

Thanks to your generosity we have already collected more than $250,000 to lend a hand to workers like Mike Pallozzi, an IBEW Local 2327 line technician from Windham, Maine. Recently, during a brutal cold snap, where temperatures dipped below zero, Pallozzi ran out of heating oil and one of his pipes burst.

"If it weren't for the Solidarity Fund, I couldn't have filled up my oil tank and paid for the repairs," said Pallozzi, who has worked for the telephone company for more than 28 years. "It's hard being on strike any time, but during a New England winter it's a killer. The incredible support that we've received from people all over this country is helping to keep me and my coworkers going. We are so grateful for the solidarity."

It's Really 'Right-to-Work' for Less

But let's stick to the facts.

Right-to-work makes it harder for workers to join labor unions so that they can collectively bargain for better wages and benefits.

"Communities don't work through issues by trying to destroy the middle class," he said.

Out-of-touch CEOs want us to think that right-to-work legislation is in our best interest, but it's really for theirs. These grossly misnamed, confusing laws are really an attempt to end unions as we know them. If we don't stop these attacks, the middle class will continue to fade away.

For over 30 years, CWA's Minority Leadership Institute (MLI) has fostered leaders within the union. Just last week, the class of 2014-2015 graduated and headed back to their locals with new skills to build for the future.

For the first time, the MLI was split into two individual weeks. During the two DC-based weeks, CWA's Human Rights Department organized and led a series of seminars and workshops designed to provide these leaders with tools to organize and motivate their members. In between the sessions, participants engaged in individual projects and additional online training, developing skills needed in an ever changing and challenging environment.

The Wall Street Journal and other media outlets are reporting that Verizon Communications will announce a sale of some wireless towers and some local wireline assets for more than $11 billion.

"We expect some assets to be sold and this will require full regulatory review. CWA will be very active at the Federal Communications Commission and in the regulatory process at state levels. Our first priority will be jobs, and second, ensuring that the standard of living of our members and the service quality provided to our communities are preserved and strengthened."

The American Arbitration Association certified last week that its examination of the workers Consent Authorization cards showed more than 50 percent of them want to belong to CWA and have a voice in their own future through collective bargaining.

The next CWA town hall call is Thursday, Feb. 19 starting at 7:30 pm ET. The call will last half an hour.