As Members of Congress return home for recess, they will be confronted with rallies and town hall meetings where constituents, CWAers and partners, have one message for them: Vote No on Fast Track Authority for trade deals. 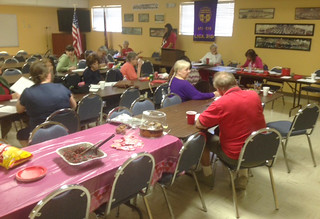 CWA Local 3104 retirees writing their Members of Congress to tell them to Vote No on Fast Track for the TPP.

Below: Activists from Local 1103 report a very positive response to the latest phone bank to retired members. Here, Retired Members Chapter Secretary-Treasurer Robert Ferguson phones retirees, urging them to call their member of Congress and press him or her to vote "no" on Fast Track authorization for the TPP. 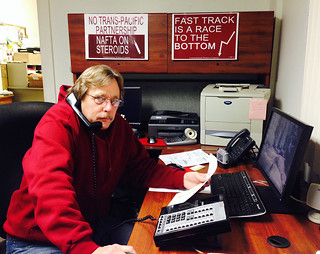 Obama administration officials – under watchful eye of the U.S. Chamber of Commerce, the Business Roundtable and officials of some of America's biggest corporations – have been secretly crafting a Trans-Pacific Partnership trade deal with 11 other nations that many have warned would destroy American jobs, wreak havoc with the environment and play fast-and-loose with our sovereignty.

Visit http://stopthetpp.org/ to learn more about the TPP.

Perhaps out of fear that details of what they're negotiating won't hold up under scrutiny, the administration has been pushing hard for Fast Track – rebranded as Trade Promotion Authority – that asks the U.S. Congress to cut itself out of its Constitutional responsibility to examine trade deals. If Congress does this, it would mean an up-or-down vote on the deal with no debate or amendment.

Many members of Congress think Fast Track is a bad bargain for a bad trade deal. Rep. Walter Jones (R-NC) went on "The Laura Ingraham Show" to trash Fast Track.

"If you want to sell out America, then get behind giving the president what I call the Trade Promotion Authority, better known as Fast Track. This is absolutely a threat on our Constitution, on our sovereignty, when you allow a president to have the authority to bring before Congress the issue, but not allow Congress to debate, to amend, or to change the agreement, then that in itself is not what the Constitution intended for this country," Jones said.

The attempt by the NLRB to make union representation elections more efficient and more consistent throughout the country has come up against fierce opposition from employer trade groups, including the granddaddy of them all, the U.S. Chamber of Commerce.

The National Labor Relations Board issued the election rule in December and immediately ignited complaints that employers are being ambushed. The Chamber of Commerce not only filed a lawsuit that is now making its way through the courts, it got friends in the U.S. Senate to call a committee hearing.

The Senate Committee on Health, Education, Labor and Pensions even titled their hearing "Ambushed: How the NLRB's New Election Rule Harms Employers & Employees" and stacked their panel of experts with three management-side attorneys to one labor-friendly lawyer. Sen. Lamar Alexander (R-TN), chair of the committee who has made crippling the NLRB a mission, parroted the Chamber's positions on the new rule better than their lawyer could at Wednesday's farcical proceedings.

Sen. Patty Murray (D-WA) said Republicans are again rushing to the defense of the biggest corporations that have an interest in keeping wages low and denying workers a voice to improve their workplace instead of sticking up for American workers.

"When workers want to vote to form a union, they aren't looking for special treatment; they are simply trying to exercise their basic right," Murray said.

Employers use loopholes in the current union election process to delay a straight up-or-down vote and use the delay to intimidate and harass workers about voting for a union.

"Our country should not turn our backs on empowering workers through collective bargaining, especially because that is the very thing that helps so many workers climb into the middle class," she added.

Here is Video of President Cohen's speech at Creating Change 2015.

"We will stand up for LGBTQ rights!" CWA President Larry Cohen promised at Creating Change 2015, the largest annual gathering of activists, organizers and leaders in the LGBTQ movement. And that means fighting the proposed Trans-Pacific Partnership trade deal. 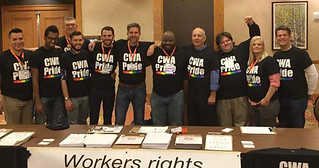 The United States is currently negotiating a trade deal with countries "where LGBTQ people have no rights," Cohen said in a stirring speech to the crowd of thousands in Denver. "A deal with Brunei that just last year, in the midst of these negotiations, adopted a so-called law that said that those who are in love with somebody of the same sex will be stoned to death. Stoned to death."

In Malaysia, another member of the 12 nations in the trade talks, homosexual acts involving men or women is punishable by 20 years in prison.

Are these the countries we want to call partners?

He reminded activists that we can still put the brakes on this disastrous agreement. He urged them to call and write their lawmakers to tell them to vote "no" on "Fast Track" authority, a bill that would speed the TPP and all other trade deals through Congress without opportunity for debate or amendments. Opposing Fast Track will put the power back into the people's hands so we can finally have a voice.

Cohen said, "Our main job is to get every member of Congress who says they're for human rights to say no to Fast Track, to say we want to read this, to say no more deals with countries where there's no human rights. And to say loud and clear: We know what we do when we're under attack. We stand up, we fight back!"

CWA President Larry Cohen was on the Ed Show on MSNBC to warn the nation to be vigilant, to fight back and to write to their Members of Congress to tell them to vote No on Fast Track for the TPP.

Cohen said one of the big problem of past trade deals like the NAFTA, CAFTA, as well as the U.S.-Korea agreement – besides hemorrhaging hundreds of thousands of American jobs in bad trade deals with low-wage countries – has been in the enforcement of the deals.

When multinational corporations want to enforce their version of trade deals they sue in secret tribunals – called Investor State Dispute Settlement, or ISDS – to get reparations of their profits from the effects of any law a government might pass whether to protect the environment, workers or their citizenry.

"There are 500 of those suits now," Cohen said. "Now, when we try to enforce a labor or environmental or a consumer provision, we have to go through our government to the other government and it literally takes years. I've been involved with that enforcement with Mexico, Colombia and recently Honduras. It takes years."

ISDS is a feature of the Trans-Pacific Partnership, the biggest economic trade deal the U.S. has ever done. Yet, it's being negotiated in complete secrecy. Even Members of Congress have to depend on leaks to learn what's in the TPP. Cohen said many of the nations vying to be part of the TPP – Malaysia, Singapore, Brunei, Vietnam, even China, which is not yet part of the deal – couldn't possibly want ISDS in the deal.

"That's the U.S. Chamber of Commerce" that wants ISDS, Cohen said. "So, if our goal is to get Vietnam closer to us, let's get rid of ISDS. Let put citizen rights on the same level as corporate rights.

"We want to enforce this deal in the same kind of time frame that corporations are going to enforce their side. Get rid of investor state one-way lawsuits from the corporate world and put us on a level playing field, or give us Citizen State Dispute Settlement so that we can sue when workers are disadvantaged."

CWA and more than 60 other labor, public interest, faith, community and civil rights organizations have formed the Grand Alliance to Save Our Public Postal Service.

Members of the American Postal Workers Union have been fighting back against attacks on their jobs and their communities. USPS management continues to push to outsource work – to Staples stores, particularly – and shut down post offices that are vital to so many communities. The coalition will fight back against the forces that want to dismantle and privatize this important service.

CWAers are a big part of this fight. You can learn more and become an alliance activist here.

APWU President Mark Dimondstein will join our February town hall call next week, reporting on the start of APWU contract negotiations and talking about postal workers' efforts to stop Fast Track authorization for the TPP.

Bargaining continued this week on a contract for 14,500 agents at American Airlines. 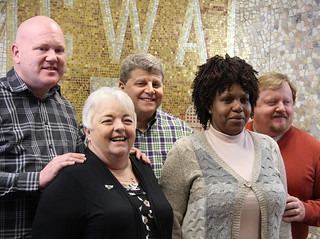 It will be a first contract for 9,000 American Airlines passenger service agents who, after a 19-year struggle, joined with the members of the US Airways CWA-IBT Association to form the new bargaining unit at the airline coming out of the merger of American Airlines and US Airways.

The September 2014 vote was the largest labor organizing victory in the South in decades. Three-quarters of the agents work in Texas, North Carolina, Florida and Arizona and 2,300 are home-based reservations agents.

USAirways agents have been CWA members since 2000. US Airways merged with America West in 2005; passenger service agents at the former America West had organized with the IBT in 2004. After the merger, the CWA and the IBT formed the Airline Customer Service Employee Association, CWA-IBT. 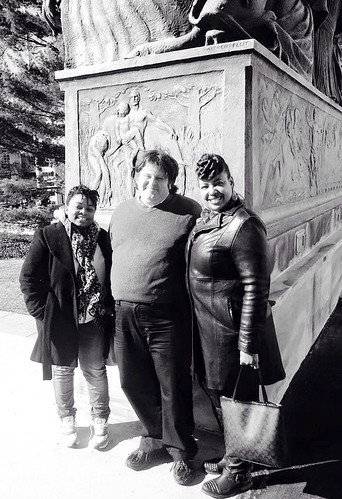 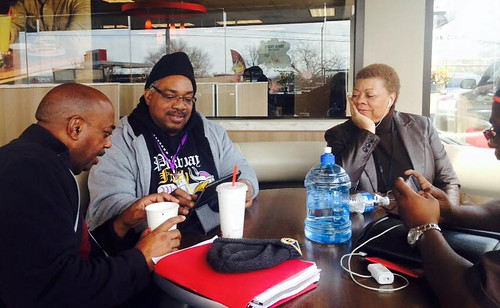 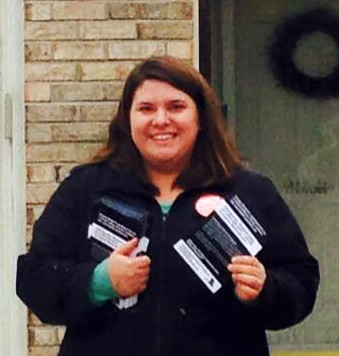 Angie Postal canvasses Sen. Paul Wieland's (R) district in Jefferson County. Postal and other activists asked Wieland's neighbors to call on him to focus on important issues, like expanding access to health care for low-income workers through Medicaid, not divisive attacks on workers like "right-to-work" and "paycheck deception."

You Need the New Version of the CWA Mobile App!

A new update of the CWA Union Movement Builder App for iPhone and Android is now available! Check iTunes or Google Play to update and you'll have access to the new scoreboard feature. That will enable you to compare your app activity with other CWA members nationwide and locally. The update also includes better social networking integration, an event history feature and bug fixes.

After you download and install the app, make sure to earn app activity points by creating an account, taking online actions and checking in to CWA events.

The next CWA town hall call is Thursday, Feb. 19 starting at 7:30 pm ET. Scheduled to be on the call are CWA activists working on the Stop the Fast Track campaign, including Nick Mazzeo, VP, Local 1152 and Dan Kozak, Local 1120.

The call will last half an hour.