2015 will be a major bargaining year for more than 200,000 of our members. As we proclaim on the cover of the new CWA News, "It's Our Turn." The economic recovery that has propelled stocks to record highs has made the 1% much richer again this year, with average share prices up over 12%.

Now, "It's Our Turn," time for our families to celebrate that we have collective bargaining rights and the improvements this brings compared to 88% of American working families who have no voice. But we are also putting CWA employers on notice that economic recovery must work for us, not just management and shareholders. Whether public or private sector, we will bargain under that banner in 2015. And we say to our President and Congress, from city hall to the state house, that if necessary, we will fight for our share of the American dream.

As we celebrate the holidays we will not forget our FairPoint strikers (click here to contribute).

We will not forget the Cablevision 99, and Jerome Thompson fired by the billionaire CEO in August and still waiting for the NLRB to act. We will not forget all those in bargaining now, still facing down employers demanding cuts while they enrich themselves.

We also will not forget that 2015 brings us the biggest trade battle of our lives – the fight against Fast Track and the Trans-Pacific Partnership. The fight against the corporate state getting stronger while our nations and our families lose jobs, earning power and rights. Whether we have voted for this President in the past or not, whether we voted for the Republican majority or not, we say to both loud and clear—NO! No more trade deals for the multinational corporations. It is our turn!

From the bargaining table to the halls of Congress, the CWA voice has never been stronger or louder or more righteous—"IT IS OUR TURN."

Bargaining with American Airlines is underway! 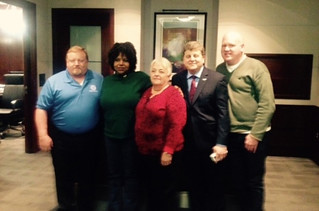 The CWA/IBT union bargaining team prepared and developed proposals, focusing on the issues that agents highlighted in their bargaining surveys, and negotiations with management began Dec. 17 in Dallas. The union bargaining team is negotiating a contract covering 14,000 passenger service employees at American. About 11,500 agents are represented by CWA.

Get the latest here and check out our Facebook page.

Senators Elizabeth Warren and Ed Markey (D-Mass.) and Tammy Baldwin (D-Wis.) warned U.S. Trade Representative Michael Froman that the Trans-Pacific Partnership trade deal will make it harder to stop shaky Wall Street dealings in the future, the kind that caused the economy to tank during the Great Recession in 2008.

"With millions of families still struggling to recover from the last financial crisis and the Great Recession that followed, we cannot afford a trade deal that undermines the government's ability to protect the American economy," they wrote. Read more about their action here.

The three senators specifically criticized the Investor State Dispute Settlement (ISDS) process that gives foreign corporations the political power and special rights to challenge the laws and regulations of a TPP-participating country in a secret international tribunal.

Including these ISDS provisions in TPP would "expose a broad array of critical American financial regulations to challenge by many additional foreign companies," they wrote.

CWA and partners, including Sierra Club, Citizens Trade Campaign, immigration groups and others, are gearing up for the fight of our lives when the new Congress begins in January.

Cricket worker Marlena Williams – who also is a former AFA-CWA member – did a great job talking to her co-workers, driving among the stores and building support for CWA representation. Also working on the campaign were AT&T mobility stewards Amanda Andriaccio, 1122, and Brian McVaugh, 1170; Local 1122 EVP John Mudie, and D1 Organizer Mary Clinton.

Cricket is a prepaid wireless provider with 1,000 workers at 170 locations. When the company merged with AT&T Mobility, Cricket workers were covered by CWA's organizing rights agreement.

In addition to the New York retail store and tech workers, a majority of Cricket mobile retail workers in Kansas, Missouri, Oklahoma, and Arkansas also have joined CWA.

January 2015 marks the fifth anniversary of the Supreme Court's disastrous Citizens United decision. That ruling, along with the McCutcheon decision of 2014, opened the flood gates and now allows millions of dollars to be spent by just a handful of wealthy individuals to influence our elections.

CWA and Democracy Initiative partners are gearing up for a Day of Action in Washington, D.C. and across the country on Jan. 21. Stay tuned, you'll want to take a stand against Big Money in Politics. And check out Stamp Stampede. 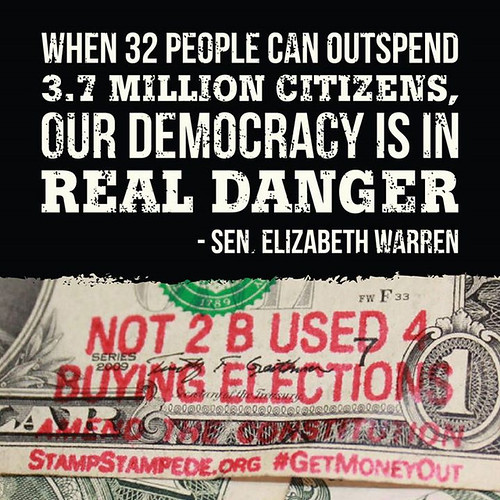 Workers and unions around the world have donated thousands of toys, clothes, diapers and gift cards to ensure the families of striking workers have a happy holiday season. The gifts are being distributed to CWA and IBEW workers throughout Maine, New Hampshire and Vermont. 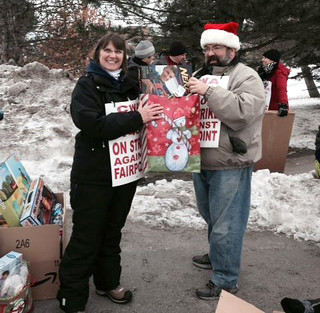 Striking FairPoint workers bring some holiday cheer to their co-workers and families, thanks to the generosity and support of workers and unions everywhere.

The IBEW-CWA Solidarity Fund has also received nearly $200,000 in donations since the strike began on Oct. 17, the New Hampshire Labor News reported.

The New Hampshire Labor News is an online site that's been giving tremendous coverage to the fight by FairPoint workers for a fair contract.

"This incredible outpouring of support is going to make the holidays a whole lot happier for our families," Don Trementozzi, president of CWA Local 1400, told the Labor News. "Two months ago, we took a stand against corporate greed. And now, to see so many people standing up for us – and especially our kids – it gives you the strength to go one day longer and one stronger."

Check out this video montage of photos from CWA's "Hi Mom" program. The program provided free calls to service members serving overseas during the holiday season. Enjoy the video and join us in thanking those who will be spending the holidays away from family and friends while they serve our country. 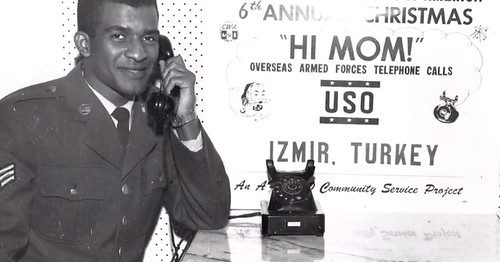