Working Americans Can't Just Wait for the Next President

We tried waiting and hoping for real change six years ago. Today, income inequality grows steadily worse while economic opportunity is out of reach for most. Collective bargaining coverage for working Americans has fallen to the lowest level in 80 years. Productivity grows while wages have not yet rebounded to the 2008 level.

Earlier this year, and largely unnoticed, the 160 million-member International Trade Union Confederation (ITUC) published its report on the global state of workers' rights. It rated nations a "1" if abuses were uncommon and a "5" if workers had no rights at all. The U.S. came in at "4," meaning "systematic violations of rights." We lagged behind 73 other nations. For the first thirty years following passage of the National Labor Relations Act in 1935, the U.S. would have been rated a "1." None of the more than 100 other nations in this report has declined as the U.S. has, and many countries like Brazil, Uruguay, South Africa, and most of Eastern Europe have improved dramatically.

How bad is a "4"? This is hurricane season and if we think of a Category 4 storm, like Superstorm Sandy, we get some idea of the severity of this crisis.

For all the useful talk about U.S. economic inequality and calls to raise the minimum wage, 2014 mostly will be another year like the last 50, with persistent attacks on workers' rights, huge income and wealth gains for the top 1 percent and a declining standard of living for the other 99 percent.

Yet Labor Day this year will be much like recent years, a little less labor and a little more like the end of summer. Political attention begins to focus on November elections, but the food fight for the next presidential election is warming up.

Six years ago, as the election of a new president loomed, there was much anticipation about a different economic order, and a focus on adoption of the Employee Free Choice Act, passed in 2008 by the House of Representatives with a 60 percent margin.

As important as a raise in the minimum wage is, that still would leave the other 95 percent of U.S. workers with the same troubling economic future that they face today. Workers would continue to have no hope on workers' rights and would be subject to a political system based more than ever on wealth thanks to a string of Supreme Court decisions.

The next presidential election likely will focus much less on workers' rights, and more on social issues and government spending. What we learned over the past six years is that the combination of dysfunctional Senate rules, big money in politics, the attack on voting rights, and barriers to citizenship for 20 million immigrants are real barriers to economic change. Unless we break through these barriers, it's just more of the same for working Americans.

There is hope if we link workers' rights to the huge democracy movement that is growing across the U.S. Labor, plus greens, consumers, and democrats from all parties realize that our nation today is not what democracy looks like. Can we all focus on the blocks to a 21st century democracy as at least our No. 2 issue? Fifty large membership organizations now endorsing the Democracy Initiative say, "Yes we can!" Our collective membership totals more than 35 million and if we can focus a growing part of our time and resources on these structural blocks as well as workers' rights, the environment, poverty, and human rights, we might even dream the American dream again.

On September 8, the Senate will vote on a constitutional amendment that would reverse recent Supreme Court decisions and allow Congress to regulate election spending. It is now clear the amendment will receive majority support but based on likely total opposition from Republicans, it will fall short of the two-thirds required by the Constitution to move forward. More important, the vote will signal that there is serious support for reform, whether through an eventual Supreme Court reversal or amendment.

For the millions of Americans facing another Labor Day without labor rights, it is also a time to commit much more deeply to broader reform of our democracy and think far beyond the next election.

We do know what democracy should look like. Get big money out of politics. A Senate that debates and votes on the key issues of the day. Universal voter registration so all citizens can turn out on Election Day. A path to citizenship for immigrants that at least resembles the path that my family and others who immigrated 100 or more years ago followed.

This Labor Day I will look forward to a warm summer day, but I'm also dreaming of the movement we can build. 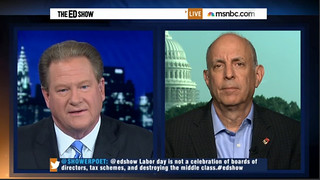 Cohen: There is No Hope for Economic Justice or Democracy If We Are Divided

CWA President Larry Cohen was one of 200 people arrested for civil disobedience outside the White House as part of the National Day to Fight for Families to protest the deportations that are breaking families apart. You can watch a short video of the rally here. 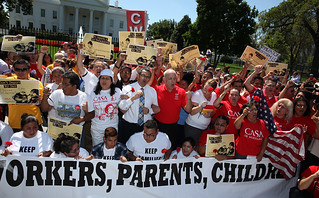 CWAers joined the action in front of the White House, where some 2,000 activists turned out to call on President Obama to stop the deportations.

In Washington, D.C., CWAers joined more than 2,000 activists from unions, community groups, farm organizations, religious groups, immigrant advocates and others in calling on President Obama to take action now to cut the huge number of people being deported every day – more than 1,000 – and keep families intact.

In addition to this unprecedented level of deportations, "thousands of children fleeing violence in Central America have been deported as well. What happened to the inscription on our Statue of Liberty – "Give me your tired, your poor," Cohen asked.

"Is this what we have come to? Divided up, as working people, based on where we came from? Divided up, as in Ferguson, Missouri, based on race? We have no hope for economic justice or democracy if we are divided, regardless of why," he said.

The President must take action and send the message that regardless of race or national origin, this remains the nation of the American dream, he said.

Across the country, thousands more families, community leaders, people of faith and others, participated in vigils, town halls and other events to push for action on immigration reform now.

Last year, the Senate passed a comprehensive bill by a bi-partisan vote. The House has refused to act, instead calling for increased deportation and enforcement-only policies that are devastating families.

From left: CWA's own President Larry Cohen, T&T Vice President Bill Bates and Chief of Staff Ron Collins are arrested in front of the White House, part of a nationwide Day to Fight for Families and against deportations. 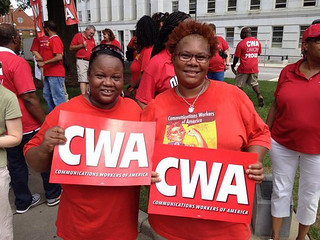 North Carolina activists, with lots of CWA members on hand, rallied and marched at the state capitol in Raleigh, for a week of protests against the attacks on civil rights, workers, voting rights, women’s rights and more. 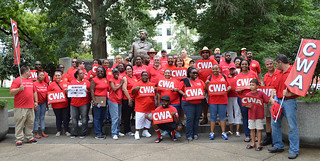 CWAers were a big part of the Moral Week of Action in North Carolina, as activists demonstrated for seven days against the extreme agenda of the Republican-controlled North Carolina legislature and Gov. Pat McCrory (R). Focusing on a different issue each day, activists rallied around workers' rights and economic justice, education, women's rights, equal protection under the law and other civil and human rights that the GOP is trying to roll back.

On Aug. 22, about 100 CWAers from across North Carolina joined the action, calling for fair and living wages and an end to the attacks on workers' rights and their unions.

After every daily rally, supporters are holding voter registration canvasses. North Carolina has been working overtime to block people's right to vote and to suppress voter turnout.

The week of action will end on Aug. 28, with people of faith leading the march to the state Capitol followed by a rally on the Bicentennial Mall. Aug. 28 is the 51st anniversary of the March on Washington for Jobs and Freedom, which brought more than a quarter of a million people to Washington, D.C., to stand up for justice for all. 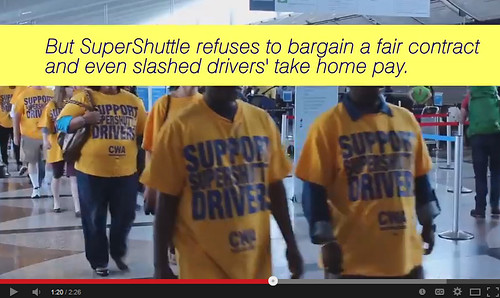 Community support is growing for SuperShuttle drivers at Denver International Airport, members of CWA Local 7777. The Denver Workers' Rights Board issued its report following a public hearing that heard testimony from drivers about SuperShuttle's abusive treatment and commitments of support from public leaders.

Learn more about their fight for a fair contract here.

Who's Taking the Ice Bucket Challenge Next? 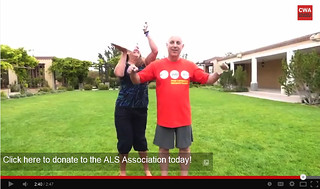 In Albuquerque for the D7 District Conference, Cohen was doused with the huge bucket of ice and cold water by Shari Wojtowicz, president of CWA Local 7250.

The challenge is raising awareness and research dollars to help find a cure for ALS – also known as "Lou Gehrig's disease" – a progressive, degenerative disease of nerve cells in the brain and spinal cord. CWA D2 Vice President Pete Catucci died from ALS disease in 2009.

They get soaked by the icy water, but participants also donate to the ALS Association. As of this week, $89 million has been raised. For more information, click here. 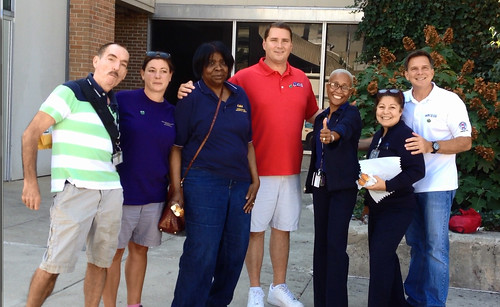 Chanting "vote like your job depends on it," members of CWA Local 13301, with CWA District 2-13 Vice President Ed Mooney, center, talk with workers at the Philadelphia International Airport. Agents at US Airways and American Airlines are voting now on CWA representation.

Steve Sarnoff won his primary race for a State Assembly seat in Pinellas County, Fla., defeating two other candidates. He will face his Republican opponent for the House District 67 seat in the November election.

Sarnoff is a city worker in Clearwater and president of CWA Local 3179.

Check out this new report from Campaign for America's Future. It's exactly on target when it comes to what needs to be done to reverse the growing inequality in our country.

Here's what Robert Borosage, president of the Institute for America's Future, says:

"America now suffers the most extreme inequality of the industrial world, as the broad middle class continues to sink. Why does the U.S. no longer enjoy widely shared prosperity? The most popular explanations focus on the changes wrought by globalization and technology, and the transition to a service economy. The most touted remedies are greater education and more worker training.

"But, if history is any guide, the most important policy is too often the least mentioned: workers regaining a voice at work, through organizing and broad-based collective bargaining. The power to bargain across entire sectors of the economy enables workers to demand a fair share of the profits and productivity they help to create. A voice at work limits executive excesses and curbs wage theft and other fair labor violations."

National Women's Committee Report: It's Time for Paid Family Leave in the U.S.

The Family and Medical Leave Act, passed more than 20 years ago, provides up to 12 weeks of unpaid leave, but it doesn't do enough. That's the focus of a new report by CWA's National Women's Committee member Esther Pond, CWA Local 3806.

Private and public, full time and part time, and self-employed workers would be eligible for the benefits.

Some states like New Jersey, California and Rhode Island already have put in place paid leave insurance programs, but we need a national law to make sure that all workers can better balance their work and family responsibilities.

Read more about the Family Act in the full report.

And then become a CWA Human Rights activist and help push important measure like the Family Act forward.

New Benefits for CWAers Through Union Plus

These new programs have been added to the Union Plus website. Check it out for more information and to make reservations.