The Denver SuperShuttle drivers took another step toward justice this week when a division of the National Labor Relations Board advised the Colorado regional office to order SuperShuttle to rescind the sham contract it imposed on the 100 drivers and restore their lost wages and benefits.

The drivers are members of CWA Local 7777, organizing to overcome the company's abuse and to gain a fair contract. SuperShuttle and parent company Veolia have illegally harassed and even fired drivers. 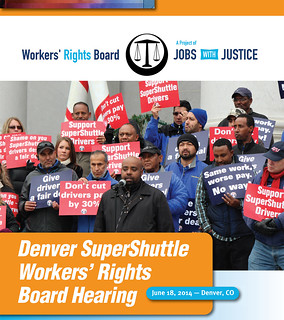 Coinciding with the NLRB action, the Denver Worker's Rights Board has issued its report and recommendations following a public hearing in June. Community, faith and political leaders heard testimony from the drivers about the company's unfair attacks as well as drivers' determination to make a better life for themselves and their families.

In the report, the Board concluded that Denver SuperShuttle management is in violation of basic human rights. The Board also found that there has been clear retaliation against the drivers for union activity, that SuperShuttle is arbitrarily imposing poverty wages, and that management has refused to bargain in good faith by imposing an unfair contract on the drivers.

The Board recommended that SuperShuttle management rescind the unfair and immoral contract imposed on the drivers, end all forms of retaliation against the workers and begin treating all workers with dignity and respect.

The Denver Workers' Rights Board is a project of Jobs with Justice.

The NLRB's Region 27 in Colorado will now attempt to reach a settlement with the company that is acceptable to the workers and CWA. Failure to reach settlement could mean a trial.

In New York City, union and community activists rallied on the steps of City Hall, demanding an end to the illegal firings and threats against workers at El Diario – members of TNG-CWA Local 31003 – and calling for the reinstatement of eight illegally fired workers. 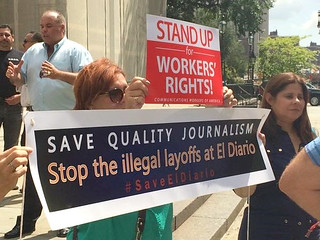 The company has since hired several nonunion employees and continues to threaten current workers who speak up. The Guild is seeking a court order to require ImpreMedia to reinstate the eight employees while the dispute is being litigated.

"We will continue to fight against El Diario's union-busting moves until these journalists have been reinstated. The Newspaper Guild is doing everything it can to save the jobs of its members and support high-quality journalism for a Spanish-speaking audience," said TNG-CWA Local 31003 President Bill O'Meara. 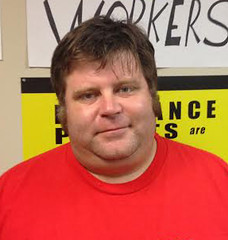 St. Louis is one of the most segregated cities in the U.S. We used to be a great industrial center and Ferguson used to be a middle-class community where nearly everyone could find a good job.

But Ferguson was among the hardest hit communities by the foreclosure crisis. Good union jobs in manufacturing and the service industry have been moving overseas for decades. Public services have been slashed. The school district that serves part of Ferguson has been taken over by the state and is in the process of being privatized. The social services office where CWA Local 6355 members work near Ferguson has seen staffing levels drastically reduced. The state university in St. Louis County has increased tuition and fees by nearly 300 percent since the Great Recession began. Today, 47 percent of young black men in St. Louis can't find employment. 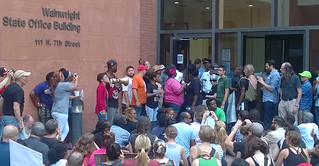 CWA activists with community allies demonstrate and sit in at the Wainwright Building in downtown St. Louis calling on Gov. Jay Nixon to intervene and demilitarize the police response to demonstrations in Ferguson. The Wainwright is home to CWA represented Missouri Department of Social Services employees and Nixon's St. Louis office.
Photo credit: Mark Esters.

But CWA and other unions have been doing serious organizing in St. Louis for several years. That organizing is part of the reason why a peaceful and positive resistance has coalesced around the community grief and outrage at Michael Brown's death. CWA Local 6355 has been working closely with a St. Louis civil rights group, the Organization for Black Struggle, to fight back against cuts to the Missouri Department of Social Services. CWA members from every local in Missouri have participated in support actions with fast food workers who belong to Show Me $15 in the fight for better wages and a union at fast food restaurants.

Many of the leaders of the peaceful resistance movement in Ferguson have developed organizing skills from the battles CWA members have fought. The fight for justice for Michael Brown in Ferguson is being led by the people of that community – as it should be. But CWA members are part of that community and, with our allies, are playing a major role for positive change.

CWAers have been in the streets with the people of Ferguson demanding justice. CWA activists are supporting protest actions and voter registration drives and exploring how the labor movement can better engage in the fight for racial equality. Community alliances aren't always easy. Racial inequality is an uncomfortable subject for many union members to address. But building a movement for democracy and justice demands that we find common ground and that we take our commitment to "be there" in allied organizations' fights for justice seriously.

In many workplaces today, it can take a lot of courage for a young woman to stand up for what's right. Do you know someone who has shown that kind of courage?

We are looking for working women 35 years or younger who stood up for workers' rights and a voice in the workplace in the face of management opposition. The nominee can be a young woman attempting to organize her workplace or standing up for justice in an organized workplace.

The winner will get a $1,000 cash award. Nominate your candidate by August 28 at the foundation's website: http://www.bergermarks.org/.

This year the Berger-Marks Foundation has added a new Courageous Young Worker Award. A panel of union, civic and activist leaders will make the final selection and present the award in the fall.

In a case that has transfixed the scientific community and mobilized health and safety activists, UCLA professor Patrick Harran struck a deal with prosecutors on criminal charges stemming from the 2008 laboratory fire that killed 23-year-old Sheharbano "Sheri" Sangji, a research assistant and UPTE-CWA Local 9119 member.

The Los Angeles Times reported that Harran had faced up to 4 1/2 years in prison if convicted of the four felony counts of willfully violating state occupational health and safety standards in Sangji's death.

Instead, under a "deferred prosecution agreement," Harran has been ordered to complete six months of community service and pay a $10,000 fine to the burn center that treated Sangji. The charges against him will be dropped if he completes his community service requirements in the next five years and his lab has no further safety violations. 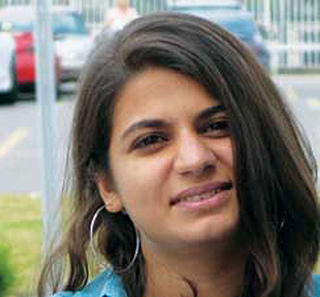 23-year-old Sheharbano "Sheri" Sangji, a research assistant and UPTE-CWA Local 9119 member, was killed in a laboratory fire in 2008.

The judge, apparently moved by testimony from Sangji's family and friends, had doubled the fine and Harran's community service obligation. Sangji's family and members of UPTE's Health and Safety Committee were disappointed that the Los Angeles District Attorney chose to settle this case rather than pursue a trial.

It's been a long fight for justice. UPTE-CWA leaders have been pushing authorities to pursue Sangji's case since the accident. In December 2008, Sangji was transferring t-butyl lithium – a solution that combusts on contact with air – from one container to another, when her plastic syringe came apart. The solution spilled onto Sanji and instantly burst into flames. She wasn't wearing a lab coat because no one had instructed her to. And her rubber gloves didn't provide any protection as the fire spread. Sangji suffered severe burns and died 18 days later.

In July 2012, three felony counts against the University of California were dropped when the Board of Regents agreed to improve lab safety programs and endow a $500,000 scholarship in Sangji's name.

Naveen Sangji, sister of the victim, said the recent settlement is "barely a slap on the wrist."

"Patrick Harran has been completely unrepentant about ordering Sheri to perform an extremely dangerous experiment without providing her with training or supervision as he is required by law," she said. "The University of California leadership, perhaps because of its culpability, and perhaps because of grant monies Harran brings in, has also refused to hold him accountable. We do not understand how this man is allowed to continue running a laboratory, and supervising students and researchers. We can only hope that other young individuals are protected in the future."

As a result of serious incidents and deaths in academic labs, including the Sangji case, the National Research Council issued a report last month that stated, "Everyone involved in the academic chemical research enterprise – from researchers and principal investigators to university leadership – has an important role to play in establishing and promoting a strong, positive safety culture." And in colleges across the country, the UCLA lab accident now serves as a powerful case study in lab safety trainings.

The Pacific Media Workers Guild, TNG-CWA Local 39521, is reaching out to the next generation of journalists to help them prepare for self-employment and arm them with the information they need to advocate for themselves and their fellow workers.

The innovative mentorship and training program is called Bay News Rising, organized by local president and program manager Rebecca Rosen Lum and project director Kat Anderson. The local hopes to ignite serious reporting on labor, workplace issues, women's rights and other social justice topics by students, and teach them how to receive fair treatment and fair pay on the job. Like many workplaces, American newsrooms are changing as the percentage of freelance and temporary workers grows. 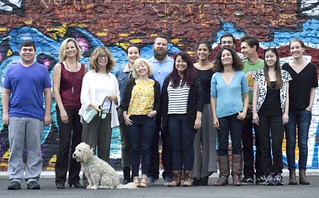 With a grant from CWA and the Berger-Marks Foundation, the local selected 11 college students out of a pool of applicants from the graduate school of journalism at the University of California at Berkeley, San Francisco State University, City College of SF and Oberlin College for the nine-week summer program. Each student was paired with a "media mentor," all of whom were professional journalists and union members.

The students began by organizing themselves and negotiating an agreement with "management," the Guild local leaders, that covered working conditions, student publication fees and a student freelance rate.

Check out baynewsrising.org, where the students' articles and other information about the program are posted.

CWA and allies held a training session in Minneapolis this week to spotlight how the Trans Pacific Partnership trade deal threatens state initiatives and show state legislators what they can do about it. Speakers included Minnesota State Rep. Sharon Anglin Treat, CWA Legislative Director Shane Larson and Courtenay Lewis, Responsible Trade Campaign Representative for the Sierra Club. The session, in a room packed with more than 50 legislators from around the country, was part of the National Conference of State Legislatures 2014 Summit.

The TPP would have serious consequences for national, state and community laws, because the trade deal as currently structured enables multinational corporations to directly challenge any laws that might affect their "expected future profits" in a secret court.

"Buy American" laws would be at risk, along with any other initiatives that these corporations don't like, from minimum wage laws to environmental standards.

CWA activists and allies are fighting back against TPP. Read more at www.cwa-union.org/tpp.