At AT&T Southeast, It's Our Turn

CWA President Chris Shelton is joining hundreds of CWAers and District 3 Vice President Richard Honeycutt at an informational picket and rally outside AT&T headquarters in Atlanta this Saturday. Members throughout District 3 are fired up and have been showing their support for the bargaining team in rallies and other actions. Locals also are holding mobilization training, and are making sure everyone is ready with picket line schedules and other information if needed.

As negotiations continued with AT&T Southeast, the CWA bargaining team stressed that the negotiations were about "respect, a better quality of family life and keeping good jobs in our communities."

But, in bargaining, AT&T continues to make outrageous demands of the workers who have made it successful. The company continues to insist on open-ended hiring of temporary workers and cuts in healthcare and retirement security. The company has not responded to workers' concerns about the excessive amounts of forced overtime hours that make meeting family and personal needs extremely difficult, if not impossible. 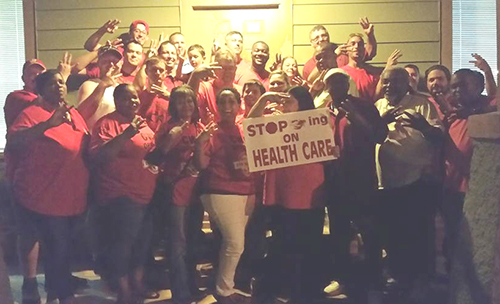 In Lafayette, La., members of CWA Local 3406 counted down the hours to contract expiration. 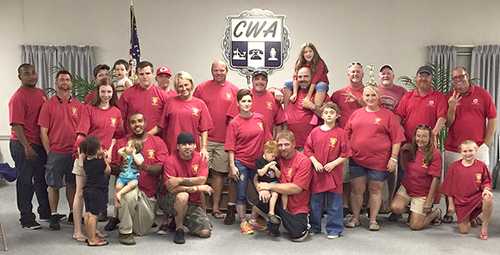 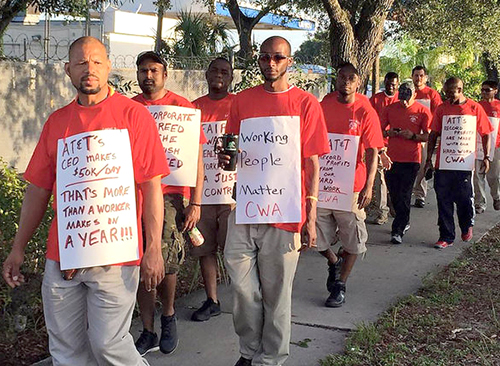 Mobilization is in full gear at locals throughout CWA Districts 1 and 2-13, as members stand up to Verizon and build increased community support for keeping good jobs, ensuring quality service and building out FiOS broadband.

CWA and members of the IBEW are working without a contract as negotiations go forward. Keep up with the latest here.

CWA has launched another round of radio ads, taking on Verizon's failure to honor its agreement to build out its high speed fiber optic FiOS service to communities throughout the Verizon footprint. The ads, personalized for each state in the Verizon footprint, point out that customers can't count on Verizon.

"Can we count on Verizon to provide high speed internet and reliable phone service to customers and maintain good jobs for working families? Check the facts.

Despite profits of $1 billion per month, millions of people can't get FiOS and risk losing reliable phone service because of poor maintenance while Verizon outsources thousands of jobs and cuts workers' take home pay.

Listen to the ads here.

The New York State Public Service Commission held a hearing in Poughkeepsie this week to investigate complaints about Verizon's service quality and its failure to live up to its agreement to build out FiOS broadband. Lots of CWAers were on hand, and Jim Gescheidle, executive vice president of CWA Local 1120, told the commission that the lack of investment and "too few workers to do the work" meant the copper wireline quality was impaired. Commmunity leaders and customers also spoke out.

CWA members, community and business leaders and customers tell the PSC that Verizon is failing to maintain the network and reneging on its promise to build out FiOS broadband.

South Jersey government officials have been banding together to hold Verizon accountable for maintaining the copper wireline network that the corporation would prefer to abandon.

Look for the CWA sea of red and lots of mobilization across Verizon territory. 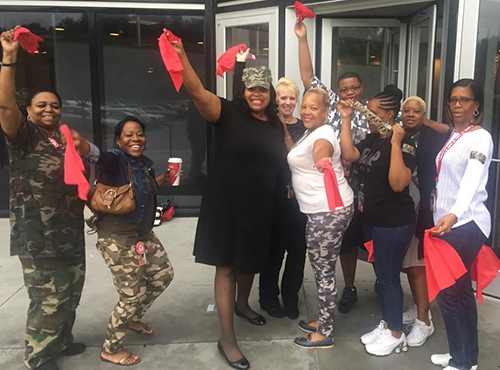 Members of Local 2108 at the customer service center in Silver Spring, Md., dressed in camouflage for the first "Militant Monday." 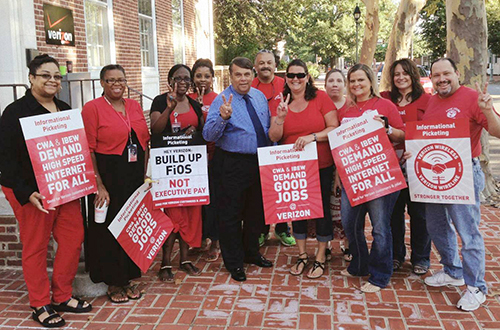 "Our two locals have been fighting some of same people and on behalf of the same issues for far too long. We're sending a strong message that we're now united and powerful," CWA Local 1084 President George Jackson said. "Our members are fed up with being beaten down and disrespected. We'll keep fighting for justice for as long as it takes," CWA Local 1014 President Karl Walko said. 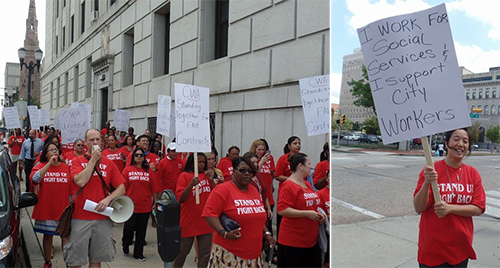 This week, CWA President Chris Shelton outlined the action taken by the CWA Executive Board to determine whether and how our union will endorse a Presidential candidate in an email to local presidents.

"CWA has not made an endorsement for the presidential primary elections. CWA doesn't get out in front of our members, and our members will decide what action we take on endorsement," he said.

Starting sometime in September, CWA will provide information about the candidates, along with an online poll for members to make their views known. CWA's political action website will include responses from the candidates to our questions on our priority issues: good jobs and trade, fair wages, retirement security, bargaining rights, and more. This information also will be provided in the Fall issue of the CWA News, which members will receive in early October.

CWA members and activists will be able to weigh this information about candidates at worksite events and in a telephone town hall call before casting their votes in the online poll. The poll will stay open into early December and will help determine whether a single candidate has overwhelming support from CWAers.

"Our members are motivated, and many thousands more have been energized by our fair trade fight. I want this activism to grow and build our movement. While local unions should continue to refrain from making an endorsement until the National Union as a whole makes a determination about endorsement, members can and should volunteer to work for the presidential candidate of their choice," Shelton said.

Many CWA activists are putting that passion to work in the Presidential primary campaigns, particularly the campaign of Vermont Senator Bernie Sanders for president.

As a volunteer, former CWA President Larry Cohen is the labor coordinator for the Sanders campaign. For Sanders, Cohen spoke nationally to 3,700 house parties; that message was streamed to 107,000 people.

Christie vetoed two bills that would have injected new money into the system and improved future funding. One bill called for a special one-time $300 million payment; the other mandated quarterly payments into the system. The state of New Jersey has not made a full pension payment since 1995. To make matters worse, Christie cut nearly $900 million from the budgeted state pension payment last year when he faced a $1 billion budget deficit.

"Even when the State has the money – or when it wouldn't cost a penny – Gov. Christie acts to deliberately harm the pension systems that 1 in 10 New Jerseyans depend upon," CWA New Jersey Director Hetty Rosenstein said.

Christie had signed a 2011 law requiring the state to do its part in restoring proper funding for the pension system, after forcing pension cuts for workers. But Christie reneged on the deal and in fact has vetoed more than $ 3 billion in pension payments from the budget in the past two years.

The Securities and Exchange Commission has finalized a new rule that require public companies to make public how much their CEOs are paid compared to rank-and-file workers.

It's been a long time coming.

Five years ago, the Dodd-Frank financial reform law said the SEC should require corporations to calculate this ratio. The new rule will go into effect in 2017 – despite the complaints of the U.S. Chamber of Commerce and corporate lobbying groups.

It's an important first step towards reining in runaway CEO pay. This transparency will force shareholders to think twice before approving outsized pay packages, and it will help push back against the practice of justifying sky-high executive pay by simply comparing a CEO's pay with that of others in the same industry.

Robert Reich, former Labor Secretary under President Bill Clinton, points out that CEOs haven't done anything special to earn these movie star-level salaries. The stock market surge, coupled with stronger intellectual-property rights and weaker antitrust enforcement, really is responsible for rising corporate profits. In particular, the offshoring and outsourcing of American jobs has helped send stock prices soaring at the expense of U.S. working families and our standard of living.

Are you ready to take the "$64,000 Democracy For All Video Challenge?"

Big money in politics affects all of us. Supreme Court decisions like Citizens United have unleashed an onslaught of spending in our elections, creating a government beholden to wealthy interests, rather than "We the People." The question of how we get our democracy back has become the $64,000 question – the big question – of our day.

Fortunately, taking action to fight the influence of big money just got a lot easier and more fun. CWA is teaming up with more than 130 other groups to offer a video contest, where you can submit a video about money in politics reform and inspire others to take action, too.

Between August 12 and December 2, go to www.DemocracyForAll.com and submit a short video (30-90 seconds) about big money in politics and the need for a constitutional amendment – the Democracy For All Amendment – to overturn Citizens United. You may want to enter early: there's a $1,000 prize every week, plus five category prizes of $5,000 each and a grand prize of $25,000 at the end of the contest.

Even if you've never made a video, it's as simple as picking up your phone and hitting 'record.'

The videos can be funny, serious, creative, dramatic, or musical. You can talk about other issues that are important to you, as long as you tie it back to the influence of money in politics and the need for the Democracy For All Amendment.

So take the challenge. Make a video. Maybe win some money. And together, we can spread the word and build our campaign to get big money out of politics.

Some 22 AT&T Mobility Network Engineers in San Juan, Puerto Rico, now have a union voice with CWA Local 3010. This is the first group of specialized AT&T technicians in the United States, Puerto Rico and the U.S. Virgin Islands to gain union representation.