Teachers at Kaplan International Centers, who teach English as a Second Language (ESL) and are members of TNG-CWA Local 31003, voted overwhelmingly on Wednesday to ratify a first contract that would provide raises, workplace protections and a voice on the job.

The teachers joined the Newspaper Guild of New York in June 2012 and are among a small handful of teachers in for-profit education who have union representation.

"By banding together to form a union and taking bold steps to fight for a first contract that provides basic workplace protections, these teachers, most of whom are in their 20s and 30s, are an inspiration to their generation," said TNG-CWA Local 31001 President Bill O'Meara. "These are educated workers who knew they deserved more than they were getting and knew they needed a union to get it."

The two-year contract includes a wage increase, access to a matching 401(k) plan, job security protections and more. It also would make some part-time teachers eligible for benefits for the first time.

"I am proud that my colleagues voted to ratify this contract, and for their actions over the past two years demanding that Kaplan provide basic fairness to teachers," said Emily Lessem, a teacher who chairs the Guild unit at the school. "While this contract is far from perfect, it will provide job protections and benefits and have a powerful impact on Kaplan teachers in New York City and across the country."

New York Gov. Andrew Cuomo on Tuesday signed the National Popular Vote bill, which would award the state's electoral votes to the presidential candidate who receives the most popular votes.

Currently, each state controls its own rules as to how electoral votes are awarded to candidates. To win election to the presidency, a candidate must receive 270 of the 538 electoral votes. Increasingly, that has meant that candidates focus only on a combination of some states to win the presidential election, reducing citizens in many states to spectator status. Plainly, their votes don't count.

But under the National Popular Vote bill, presidential candidates would compete for every vote in every state. States that pass the bill agree to award all of their electoral votes to the candidate with the most overall votes nationwide. The plan goes forward when states with at least a total of 270 electoral votes adopt it.

It already has been adopted by these jurisdictions: California, District of Columbia, Hawaii, Illinois, Maryland, New Jersey, Massachusetts, Rhode Island, Vermont, Washington and now New York State, for a total of 165 electoral votes. That's more than halfway to the necessary 270.

CEO Pay Is Out Of Control 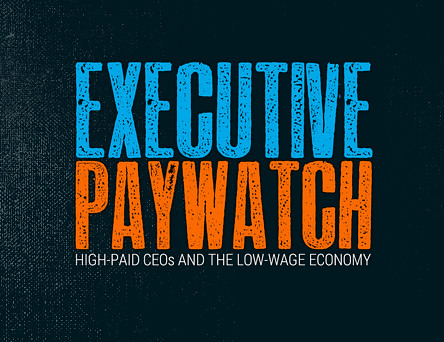 A full-time minimum wage employee would have to work 580 hours just to equal a single hour of T-Mobile US CEO John Legere's pay.

I troubleshoot everything, from handset issues to rate plan questions to billing problems. I have been working at T-Mobile for nearly two years. I make $11.46 an hour.

As a single mother with two adorable children, Jude and Lyla, I don't earn enough money to make ends meet, so I still have to rely on government assistance, including food stamps and subsidized day care.

I like helping people. That's why I chose customer service. I try to find the best solution to a customer's needs. I like to think that I enable people all over the United States to get the most they can from their wireless devices.

My work is very stressful. Sometimes callers are angry about previous service or something is not right about their service or their bill. The company expects me to be smooth and reassuring, regardless of the customer. The company expects me to solve the problem in 370 seconds -- a little more than six minutes. Otherwise, I am dinged on my performance metrics, and those metrics determine any bonus I may receive or the shift I will work.

I am expected to be on the phone 96% of the time I am at work. The other 4% is really a buffer. If I am on a call that runs into my scheduled break or lunchtime, it counts against my commitment to schedule. This is hard for me but impossible for some of my pregnant co-workers. They are forced to clock out (and lose income) just to use the bathroom.

I fear for my job not because I am doing poorly but because I am an at-will employee, as the company is fond of reminding me. The company can make life so miserable for you that you will quit. Or my metrics might slip and I could get a schedule that wouldn't work with my kids. Or management just may get tired of my union activism.

I am a proud and active member in CWA-TU, the union of T-Mobile workers, and my hope is that someday workers at T-Mobile will have better pay, working conditions and the respect all workers deserve.

Read more testimonials from workers at Walmart, Kellogg's, Reynolds and Darden Restaurants and compare your own pay to the pay of top executives at www.PayWatch.org.

CWAers, Sunflower activists and other community supporters are rallying for workers' rights and jobs with justice. 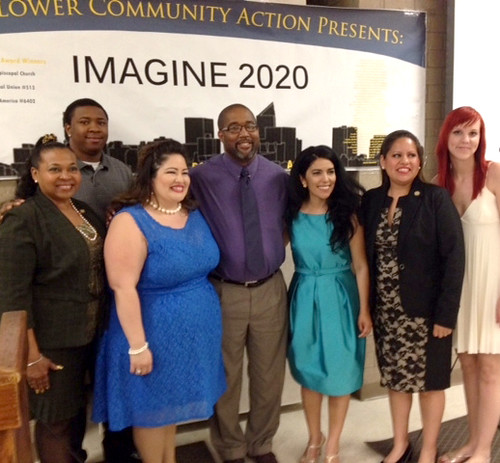 Sunflower Community Action, a CWA partner and the Kansas affiliate of National People's Action, recognized CWA for "exemplary commitment to the pursuit of justice, equality and the changing of lives," at a recent award event.

More than a year ago, members of CWA Local 6402 joined Sunflower activists to protest the extreme policies aimed at immigrants and their families being pushed by Kansas Secretary of State Kris Kobach. Since then, Sunflower activists have taken on the fight for fairness for T-Mobile US workers, and with other community allies, rallied outside the Wichita call center to save 350 jobs. With Interfaith Worker Justice, SEIU and others, the groups are partnering to "change things" in Kansas.

More than half of the Pulitzer Prizes awarded this year went to journalists in TNG-CWA represented newsrooms.

"We take enormous pride in the fact that Guild members and the news organizations they work for represent the very best of American journalism," TNG-CWA President Bernie Lunzer said. "The Pulitzers, like the Guild's coveted Heywood Broun award, illustrate how and why quality journalism is essential to our democracy. You don't get an informed citizenry by recycling news releases online. And that's what fills a lot of space when newsrooms are cut to the bone. The Guild is committed to the fight to preserve -- and restore -- good jobs for dedicated journalists like today's winners."

* The TNG-CWA represented Washington Post newsroom shares the Public Service award with The Guardian for "its revelation of widespread secret surveillance by the National Security Agency, marked by authoritative and insightful reports that helped the public understand how the disclosures fit into the larger framework of national security."

* The TNG-CWA staff of The Boston Globe receives the Breaking News Reporting award for "its exhaustive and empathetic coverage of the Boston Marathon bombings and the ensuing manhunt that enveloped the city, using photography and a range of digital tools to capture the full impact of the tragedy."

* Eli Saslow of The Washington Post wins the Explanatory Reporting award for "his unsettling and nuanced reporting on the prevalence of food stamps in post-recession America, forcing readers to grapple with issues of poverty and dependency."

* Inga Saffron of The Philadelphia Inquirer wins for Criticism for "her criticism of architecture that blends expertise, civic passion and sheer readability into arguments that consistently stimulate and surprise."

* The New York Times' Tyler Hicks receives the Breaking News Photography award for "his compelling pictures that showed skill and bravery in documenting the unfolding terrorist attack at Westgate mall in Kenya."

* Josh Haner, also of The New York Times, receives the Feature Photography award for "his moving essay on a Boston Marathon bomb blast victim who lost most of both legs and now is painfully rebuilding his life."

Many Guild members were also among the finalists for the prize.

At AT&T Mobility, our members took a stand for the right to sit, and won. It's all about bargaining rights, and AT&T Mobility activists fought hard to win this big change in working conditions. We'll hear about that from Local 9505 Steward Lily Pimienta, and from AT&T Mobility activist Lamar Banks on the Unity@Mobility training that Mobility workers are participating in as another way to build our union and our movement to win progressive change.

Verizon Wireless workers want those same bargaining rights. An overwhelming majority of employees from the company's seven Brooklyn retail stores signed cards saying they want to join CWA. On the call, we'll hear from Bianca Cunningham, a VZW activist who'll talk about workers' solidarity and determination, even in the face of an aggressive attack on workers' rights. Watch this great video.

T-Mobile workers are all too familiar with the tactics of harassment, intimidation and surveillance. But that hasn't stopped their fight for CWA representation. We'll also be talking with TU member and activist Amber Diaz who has put her livelihood on the line to help win get justice at work. With actor Danny Glover, Amber and UAW members have been meeting with students on college campuses and are building strong support for workers' rights.

CWA President Larry Cohen also will join us on the call. Will you?

We'll be dialing you tonight, but you can also listen to the town hall online at www.cwa-union.org/cwalisten.

Empire State College of the State University of New York is now accepting applications for the Morton Bahr Online Learning Scholarship for the 2014-2015 academic year.

The scholarship honors the commitment to educational opportunity and online learning of Morton Bahr, CWA's president emeritus and an Empire State College alumnus. It helps union members and other workers achieve their education and life goals by providing access to higher education through distance learning.

Students who receive the scholarship will study online through Empire State College's Center for Distance Learning.

Since its inception in 2001, the Bahr scholarship has helped 61 students continue their education through distance learning.

The deadline for applications is May 15.

Union workers, family members and domestic partners interested in working toward a degree at Empire State College are eligible. To submit an application online or to download the form, visit www.esc.edu/bahr.

Check out "The Future of Work in America: Policies to Empower American Workers and Secure Economic Prosperity for All."

It's part of a new project by the Roosevelt Institute that is bringing together progressive and community leaders to expand workers' rights, quality jobs and work for new solutions for shared economic prosperity in the 21st century.