"New populism can't just be the sum of the parts. We have to really struggle beyond our parts," he said, speaking at a Campaign for America's Future event focused on strategies for educating, energizing and mobilizing around an agenda for economic change.

He added, "I'm a big believer that we need a common narrative." 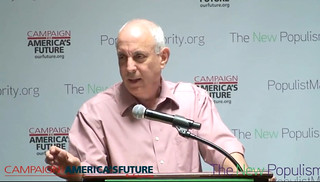 Walking attendees through the latest edition of CWA's Movement Building booklet, Cohen stressed the importance of linking economic justice and democracy. He connected the dots between unfair trade deals and why workers haven't seen an increase in real wages in decades. He explained the rise and fall of collective bargaining in the United States compared to the rest of the world. And he explained the lessons of activists' latest struggles and victories at T-Mobile US.

Cohen traced the movement back to the 2008 election, which ushered in President Obama and a Democratic majority in both chambers of Congress.

"We won't do better than that and it didn't cut it," he said. "So if we keep on doing the same things, including what we did then, we're like rats on a treadmill, literally. So we learned from that election."

The 2011 Wisconsin protests that took over the state capitol taught activists what democracy looked like, Cohen said. The following 99 Percent Spring Training, which taught 100,000 people about the principles of collective nonviolent action, solidified how to enact real change. Next came the launch of the Democracy Initiative in 2013, where labor, civil rights, voting rights, environmental, good government and other like-minded organizations committed to end the corrupting influence of corporate money in politics, prevent the systemic manipulation and suppression of voters, and curb the abuse of Senate rules.

Last summer's successful fight to upend the Senate's archaic traditions is proof of what can happen when a broad coalition bands together around a common cause, Cohen noted. The Committee for Better Banks – where bank workers around the world are joining together with local community groups to advocate fair wages and respect on the job – shows how solidarity can cross borders and languages.

"We need a democracy movement that resembles a lot more of what we saw in Tunisia than anything we've seen here in generations," he said.

Cohen encouraged everyone to break out of his and her silos.

Or check out the individual speakers on C-SPAN.