Some 39,000 CWA and IBEW members at Verizon from Massachusetts to Virginia are working without contracts, which expired Aug. 1.

CWA negotiators for Districts 1 and 2-13 have told Verizon that it's time for the company to get serious and get off these demands for givebacks.

"Despite our best efforts, Verizon refuses to engage in serious bargaining towards a fair contract," said Dennis Trainor, CWA District 1 Vice President. "Verizon has earned $1 billion a month in profits over the last 18 months, but continues to insist on eliminating our job security and driving down our standard of living. We're not going to take it, and we're going to keep the fight going while we're on the job." 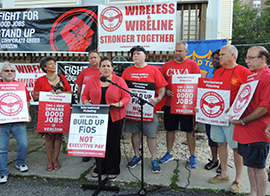 "The company has barely moved off its initial June 22nd proposal that made outrageous demands of our members. If this company is serious about reaching an agreement, it needs to start bargaining constructively and now. Right now there isn't even anyone across the table from us who's got the power to make any decisions," said Ed Mooney, CWA District 2-13 Vice President.

More than 11,000 CWA Verizon members and supporters listened to the town hall call on Aug. 2 that included reports from Mooney, Trainor and bargaining committee members, questions from Verizon members and an outline of next steps from CWA President Chris Shelton.

Listen to that call here.

CWA activists in the Verizon footprint are getting statements of support from state, local and national elected officials, and are calling on community allies and retirees to "stand up to Verizon" with us.

Countdown to Contracts at AT&T Southeast

With contracts covering CWAers at AT&T Southeast, AT&T Utility Operations and BellSouth Billing set to expire this Saturday, Aug. 8, after midnight, AT&T members have sent an overwhelming message of solidarity and determination to the company in this fight. By a 96 percent vote, members voted to authorize CWA to call a strike if a fair contract can't be reached.

AT&T is a very profitable company, posting a net profit of $6.5 billion in 2014. But at the bargaining table, it still demands givebacks. The company has made a substandard health care proposal, is demanding givebacks in job security, wants to hire more temporary workers and continues to insist on excessive forced overtime.

Get the latest bargaining updates here.

Left: As the deadline looms, CWA Local 3112 members in West Palm, FL, held an informational picket. Right: CWA Local 3907 activists at the Greer Street work center in Mobile, AL, wrote: "Dear AT&T, Since we helped you make BILLIONS of dollars in profit, how about giving your workers a share by offering a contract that's fair?"

Frontier Communications and CWA Reach Agreement in Texas and Missouri

CWA District 6 and Frontier Communications have reached agreement as part of the company's acquisition of Verizon's wireline assets in Texas and Missouri that is due to be finalized in 2016.

Frontier has agreed to honor and extend the current collective bargaining agreement covering 2,000 CWAers for two years beyond the 2016 expiration with annual wage increases. It also will add 60 new jobs, maintain job security and guaranteed workforce size, and is committed to a 100 percent U.S.-based workforce.

CWA District 6 Vice President Claude Cummings said, "We have reached an agreement with Frontier that is in the best interests of telecommunications workers and consumers. We hope to build on this partnership going forward."