Thanks to the effective mobilization of CWAers at AT&T Southeast, management knows exactly what day it is. In call centers, garages and other worksites, CWAers mark "Blue Mondays," "Black Fridays," and of course, always wear red on Thursdays.

Despite AT&T's net profits of $6.5 billion in 2014 and regulatory approval for the company's $48.5 billion merger with DirecTV, AT&T is balking at negotiating a fair contract for more than 28,000 workers at AT&T Southeast.

Call center members from Local 3201 in Georgia, and techs, members of Local 3806 in Tennessee, make sure AT&T knows it's "Blue Monday."

CWA District 9 and Frontier Communications reached agreement as part of the company's acquisition of Verizon's wireline assets in California that is due to be finalized in 2016.

Frontier has agreed to honor and extend the current collective bargaining agreement covering 3,400 CWAers for two years with annual wage increases. It also will add 150 new jobs in California, maintain job security and guaranteed workforce size, and is committed to a 100 percent U.S.-based workforce.

CWA District 9 Vice President Tom Runnion said, "After several sessions of intense negotiations, we have reached an agreement that's in the best interests of telecommunications workers and consumers in California. As we move forward in this partnership with Frontier, CWA members will continue to provide customers with the quality service they expect and deserve."

Continued bumbling by United Airlines management in the middle of what Bloomberg News is calling "The Summer From Airline Hell" for the Chicago-based carrier, did not prevent them from reporting a record breaking $1.2 billion quarterly profit – but to date is preventing them from sharing their largesse with the employees that made the profit possible.

"United Airlines' record-breaking $1.2 billion quarterly earnings must be shared with Flight Attendants," said AFA-CWA International President Sara Nelson. "Announcing a $3 billion stock buyback plan at the same time is outrageous as current management fails to invest in Flight Attendants who are among the frontline working people who make the airline go." 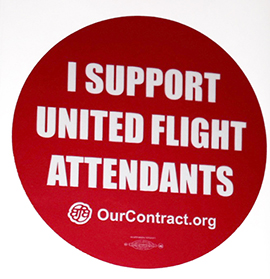 Fully five years after the United/Continental/Continental Micronesia merger, United management has failed to negotiate a joint contract necessary to merge the operations of three separate and distinct airline operations.

Thus far, United management is approaching the negotiations as if Flight Attendants should pay for the merger through cuts to healthcare, working longer days with less flexibility, removal of profit sharing and compensation that doesn't even recover other cuts to the contract. Every consolidation has merger-related costs such as harmonizing airport operations, signage and workable reservations systems. There are assumed costs related to putting together contracts, too, and Flight Attendants shouldn't have to pay for those costs, especially as the airline profits soar.

The bottom line, Nelson said, is that during the most profitable period in commercial aviation history, it is the passengers and employees who should be feeling that success.

"Flight Attendants, who are aviation's first responders and the last line of defense in aviation security for millions of passengers, deserve our fair share," said Nelson, and 19-year veteran Flight Attendant. "It's our turn, and it's past time! If not now, when?"

The contract provides for across-the-board wage increases, maintains quality healthcare, expands paid time off, strengthens the grievance and arbitration process and includes severance pay and recall rights if layoffs occur. Local 38010 said the contract "is one of the strongest, most progressive contracts for nonprofit Guild-represented employees in the country."